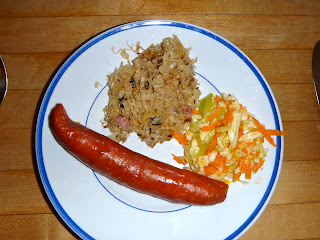 Can Slovenian cooking be healthy?  In my recent thinking and writing about this knotty problem, I overlooked something.

I had forgotten the salt.

Or, to be more exact: I never forgot the salt.

I used to reach for the salt shaker before tasting my food, until my husband started nagging me about it. He had raised my consciousness, but only up to a point.  In fact, neither of us had worried too much about the issue. We eat almost no fast food and very little processed food.  We follow a healthy diet.  He does most of the cooking.

His blood pressure.  It tends to go up as we age, and the majority of Americans will eventually develop hypertension. He had finally crossed that line, despite more than three decades as a non-smoking runner who kept his weight down and ate a healthy diet. You can't change genetics or family history, so what was left for us to do?

The suggested sodium limits for Americans recently became more stringent. The CDC's recommendations are now 2300 mg a day if you are low risk, or 1500 mg a day for everyone over 50 or with high blood pressure. That second figure, which applies to most adults, is about a third of what the average American consumes.  It is the equivalent of a half teaspoon of table salt.

I started adding up the numbers.  It is amazing how much sodium lurks in even some innocent-looking foods.  Breads and crackers.  Breakfast cereals.  Pickles and olives.

When I looked at lists of forbidden high salt foods, my Slovenian heart sank.


No more of these, if you believe the experts: 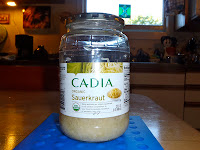 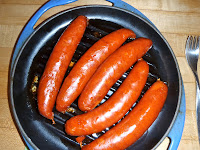 No doubt about it. This was going to be a challenge.  Much harder than reducing fat or cutting carbs.  It would have to be a whole new way of cooking and eating.

Luckily, I discovered a wonderful new guidebook: Sodium Girl's Limitless Low-Sodium Cookbook, by Jessica Goldman Foung, a young San Francisco woman with an inspiring story.  She had been a college student, on dialysis and awaiting a kidney transplant, when she adopted a radical low sodium diet. It worked.  Today her illness is under control and she is getting considerable acclaim for her low sodium cooking blog and her just-published book.  So that put our situation in perspective.

I wasn't sure how many traditional Slovenian favorites could be transformed into low salt dishes.  But I figured I could still be inspired by some of what I had discovered.  Even if sausage and sauerkraut would take a back seat, other flavors could be carried forward.

At least I hoped so. 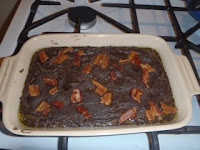 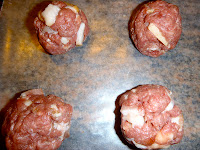 In that spirit, I decided to make a Slovenian-inspired granola, based on a delectable version I discovered in Sodium Girl's cookbook.   I'll be posting my recipe soon.  (Update: Here it is!)

In the meantime,  you can take a look at Sodium Girl's recipe, which began as a sort-of granola bar. It's here, on her blog.