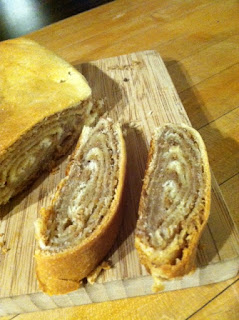 My parents met on a YMCA-sponsored bike hike the summer before they entered the same Cleveland high school. Their tale of love at first sight was part of our family lore for as long as I can remember. But I never knew the date of the momentous event--or about the potica--until I starting reading my parent's old World War II love letters.

My parents wrote almost every day of their three-year separation. The memory of that first date was so important that they acknowledged it every month when the day rolled around, at least during their wartime correspondence. They always exchanged anniversary greetings and often reminisced. So that's how I learned the full story.

I found the most detailed account in one of my mother's letters, written on what she referred to as their sixth anniversary. After the group bike outing, she had invited the cute boy with the curly hair, along with a couple of his friends, back to the modest home her family shared with the landlord and his kids in a mostly-Slovenian neighborhood called Collinwood.

My grandmother welcomed her daughter's new friends. To sweeten the deal, she held out the promise of refreshments: soft drinks and a taste of the potica she was making.

Those teenage boys agreed to wait around for potica? I started to imagine my clever grandma laughing in the kitchen! Now she could be certain the young people would remain under her watchful eye for at least a few hours--or longer, depending on where she was in the potica process. No Slovenian boy would have fallen for that trick. But my father was Scottish. For all he knew, she might have been whipping up a quick batch of scones.

Hours later, my parents still sat in the living room, completely smitten. They talked all night long, while my father's captive buddies waited patiently. At some point, there was even some potica.

When did my grandmother start working on that potica? If only I had learned the story a year earlier, I could have asked my mother. But now she was too diminished, in body and in mind, to have any kind of extended conversation.


Potica will never be a spur-of-the-moment treat. But this sweet story raises a  good question: How quickly could my grandmother (or anyone) turn out a potica? Are there shortcuts that save time but don't compromise the final product?

I would answer with a qualified yes.

My family recipe (that's the original copy below) is actually easier than most, because of the simple layered filling and the make-ahead yeast dough. But it does require advance planning, because the dough is supposed to rest in the refrigerator overnight before rolling and filling.


But what does "overnight" mean? An equivalent stretch during daylight hours should work just as well, but are the full eight hours really necessary? After all, the dough never rises much in the refrigerator.

Once before, I had taken a chance with a shorter daytime rise, when I decided at the last minute to make potica for an evening social gathering. The details were hazy, but I thought the loaves were a little flatter than usual.

Two months ago, I tried once again to make potica in a single day. This time, the occasion was a sad one. The husband of Mia, our wonderful Slovenian teacher at San Francisco's Slovenian Hall, had died unexpectedly. France Rode, a prominent engineer and inventor, had been a much-loved figure in the community. I wanted to bring potica to the gathering that would follow his memorial service.

In theory, I did have the full weekend before the memorial service to make potica. With better planning, it would have worked. But I was out of everything but yeast --and I wanted to visit my ailing mother on Saturday afternoon. Once we got home, I wasn't in the mood for grocery shopping, much less a post-dinner dough preparation.

So that left Sunday. A single day to shop, make the dough, let it rest in the refrigerator, hand-grind the walnuts, and then fill and bake the loaves.

The day began with a morning walk to the corner market and ended twelve hours later with the covered loaves cooling on a rack, while I toddled off to bed.

Yes, it can be done. It was a full day. But it also felt like a kind of mindfulness practice.

I sampled the potica the next night, when some of my fellow students gathered at my house. It tasted fine. I took most of it to the memorial later in the week and froze the rest to take to our final Slovenian class the following week, for our annual end-of-term celebration.

That final class was bittersweet. As always, there were visitors, musicians, food and drink, and student presentations. But France Rode's absence was felt by everyone.

When my turn came to present, I talked about my family history. I told the story of that "first date" potica-- including the key detail I had learned just that morning, when I re-read my mother's letter.

I had just learned that today was the anniversary of that long-ago meeting when my parents started talking and, fortified by my grandmother's potica, never stopped: June 19, 1938. And now I was honoring it myself, for the first time, in a time and place that felt just right.

For Slovenians, potica always seems to be there at the important moments. For times of sadness and times of celebration. To mark beginnings and endings. It's part of who we are.

A few tips about "shortcut" potica with my family recipe

Aside from the obvious--shop in advance, start early--there is just one significant way to make a faster version of my family's traditional recipe, which normally calls for an overnight rise in the refrigerator.

If necessary, you can make the potica in one day rather than two by reducing the time the dough chills in the refrigerator. The family recipe does work as long as the rich yeast dough (which includes melted butter and sour cream) is completely chilled before rolling it out.

To prepare (and chill) the dough as quickly as possible: Pour the melted butter into a room temperature bowl and let it reach a cool, semi-liquid state before mixing it with the other liquid ingredients to make the dough.

Prepare the dough as usual. Wrap and chill.

I found that three hours in the refrigerator may be sufficient, although five hours was better. The five hour loaf (shown in the photo at the top of the page) rose a little more and held its shape better than the three hour version.

A slightly denser loaf is a small sacrifice if the alternative is to have no potica at all. And my family's style of potica (rich, thin layers, flattish loaves) is closer to baklava than a light, airy yeast bread. Most importantly, the intoxicating flavor and aroma remain the same, even with this small shortcut. 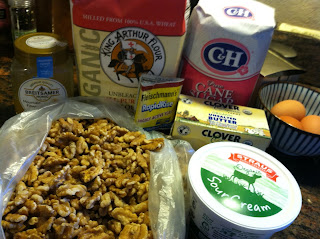 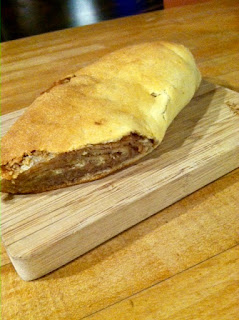