After Week 10's struklji, I was ready for something a little less adventurous.

Chicken paprikash is familiar to most Americans.  It is another one of those Slovenian dishes with Hungarian origins.

The Progressive Slovene Women offered a straightforward recipe along with the proper Slovenian name: kokošli paprikaš.

I made just a few adaptations.  Instead of a whole cut up chicken, I used chicken breasts. I browned the onions and paprika before adding the chicken, not after.  I used light sour cream, just because it was on hand.

The other change was unplanned.  I ended up using more flour to coat the chicken than the single tablespoon the recipe suggested.  That is probably why the sauce was a little heavier than we would have liked.

Cut up chicken pieces, salt them, and coat with flour.  Brown onions and paprika and cook until onions are golden.  Add the chicken and brown on all sides.  Add water and cayenne, cover and simmer 1 hour or until done.  Mix in sour cream five minutes before serving.


I decided to make homemade egg noodles, a dish I associated with my grandmother.  All three of my vintage cookbooks offered recipes.   In Slovenian, they are called rezanci, I learned.

Those noodles were  the real adventure of this week's dinner.  The ingredients are simple: eggs, flour, a bit of salt, water.   It's all in the technique.  So  I'll devote a separate post (with photos) to the noodles. 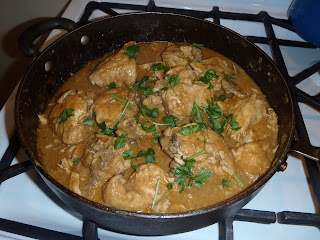