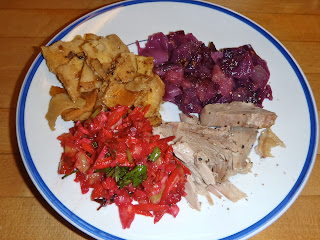 This was another dinner where the side dish became the main event.

Mlinci (m'LEEN-tsee), also known as baked noodles, seemed like an intriguing but improbable dish.  I had to give it a try.

I first heard about mlinci when The Professor, a Facebook friend who lives in Slovenia, posted a photo of a festive St. Martin's Day dinner he'd just prepared: A roast duck, accompanied by a strange sort of dumpling or noodle called mlinci.

Months later, I came across a recipe for mlinci/baked noodles in the Progressive Slovene Women's cookbook.  I found a few other recipes through an Internet search.  It's a simple dish.  A noodle dough, rolled into thin rounds and baked, then cooled and broken into bits.

To serve, the bits are moistened with boiling water or dropped into soup. Presto! Instant noodles.  Or dumplings.  Or something.  Often mixed or fried with the drippings from roast poultry or meat.  I couldn't quite picture it.  An unleavened flatbread or cracker, soaked in liquid.  What was the point?

Suddenly, I realized this wasn't so odd.  It reminded me of the way they serve matzo for breakfast in my husband's family.  Moistened and salted, then wrapped in a napkin, to make it a little more bread-like. Or like matzo farfel, nothing more than bits of broken matzo, another staple in Jewish cooking, especially for Passover.  Or, for that matter, those little oyster crackers we used to drop into soup when I was a child.

Some recipes, like the Progressive Slovene Women's, use yeast.  But most don't.  So I followed the unleavened approach:


Mix the above ingredients, as though making standard egg noodles.  (With my finger still in a splint, I used a food processor.)   Since the eggs were extra large, I didn't need any milk.  In fact, I had to add some extra flour.

Let dough rest 30 minutes, covered.  Divide into four pieces.  Roll each one into a thin disk. (Note: thinner than what photos here suggest!  See update at the end of this post.) Prick.  Bake on ungreased baking sheet at 350 degrees.  Turn over when dough begins to brown.  The finished product should look brown and blistered, like a giant cracker.  It will be much firmer that matzo. Remove from oven and cool on rack. 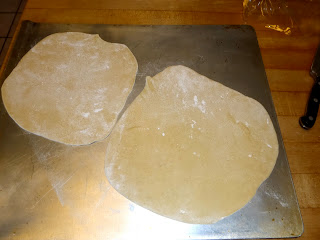 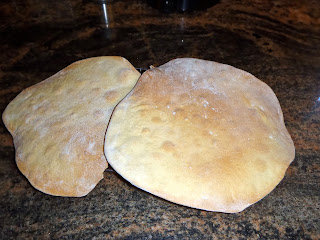 Meanwhile, I had roasted a nice duck.  Nothing fancy, but I've posted the recipe here. 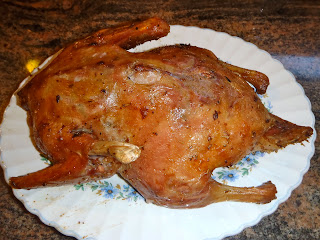 Break rounds into pieces.  (I used two rounds.)   Put in glass or ceramic bowl.  Cover with boiling salted water.  Let sit until soft, 5-15 minutes, depending on thickness of mlinci. Drain. Add to drippings left in pan from the roast duck and stir to mix. Put back in bowl. You can put bowl back in oven to keep warm, while someone carves the duck. 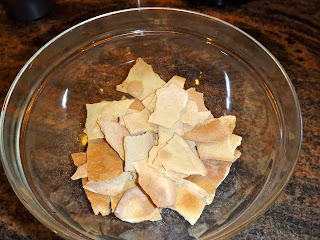 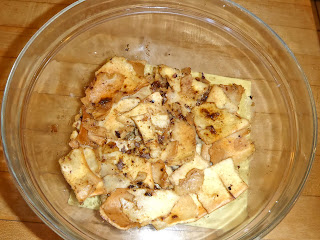 The verdict?  This unlikely dish was luscious!  Sinfully rich, of course, with the duck fat and crackly bits mixed in.  Something like stuffing, something like Yorkshire pudding.  But better.  A perfect special occasion accompaniment to roast fowl or meat.

Oh, and those unused rounds of mlinci kept well.  They made a nice replacement for croutons in salad and served as a crunchy bread substitute in next week's dinner.


Update:  In July of 2014, I purchased ready-made mlinci at the source: a vendor in the Ljubljana Farmers' Market!  Having seen (and cooked with) the real thing, I now know that mlinci should be much thinner than my photos here suggest.  I have also developed a delicious sweet mlinci dish for breakfast or brunch.  To read about it, go here.