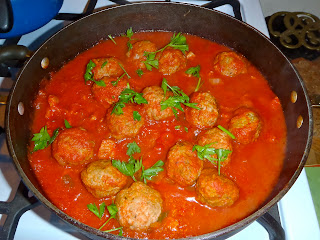 The foundation for this dinner was a recipe called "Spaghetti and Meatballs" in Woman's Glory: The Kitchen, the classic cookbook published by the Slovenian Women's Union of America.  When I first saw the recipe, I figured it must be one of their standard American recipes, or perhaps Italian-American.

But then I took a closer look.  Caraway seeds, cheese and bacon? That was not a typical American take on spaghetti.  It might not be traditionally Slovenian, but those were the unmistakable flavors of Central Europe.

So I made a mental note: This dish would be a good choice on a week when I was short of time, or didn't feel up to the challenge of an unfamiliar Slovenian specialty.

On Tuesday of Week 23, I didn't want a cooking challenge.  It was a sad time at our house.  My mother-in-law had just died on that June day.   My husband got the call from his stepfather early in the morning.  Even though she was in her eighties and in failing health, it was a painful shock to lose her so suddenly.

The day was filled with phone calls and travel arrangements.  We would be flying to the east coast on Friday.

In the midst of all that turmoil, I felt a surprising relief to have one simple, necessary task to perform. Making dinner.  It might bring a small degree of comfort to both of us.

So I went to Woman's Glory and followed that simple meatball-and-sauce recipe.  My only only real change was to add some matzo meal, when the meat mixture seemed too soft.

I served the meatballs with a stovetop cornmeal polenta, instead of spaghetti.  It seemed more Slovenian that way and also more soothing.

I've given the recipe a new name,  caraway meatballs, since that was the flavor that distinguished it from the standard American version of this dish.

It did turn out to be a good, comforting choice.  And not just because of the food itself.

It seemed right, somehow, to be sustaining my little family with the help an old-fashioned cookbook called Woman's Glory.   Looking back, I consider it a small gift from all those mothers and grandmothers of the past, now gone.

Dinner became a moment to stop and remember all the women in our families, especially the ones we have lost.  A time to give thanks to all those women of blessed memory. 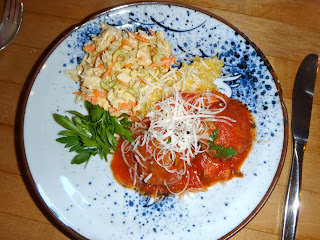 Directions:  Mix all the ingredients for meatballs, adding matzo meal (or bread crumbs) to bind, if necessary.   Form into balls and set aside.  For sauce, brown bacon and onions, then add meatballs.  Add tomatoes and seasonings.  Simmer an hour, or longer if you like, adding water as needed.

Serve over polenta, as I did, or over spaghetti.  Sprinkle with grated parmesan cheese, if desired. 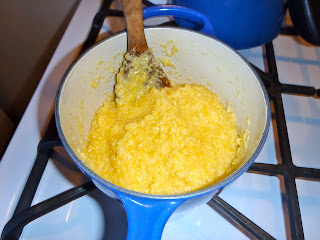