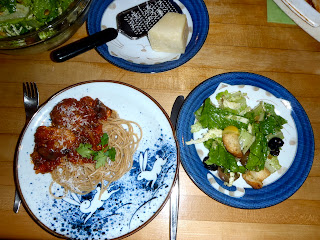 The last Tuesday in November was shaping up to be a busy day.  An appointment in the morning, volunteer tutoring in the afternoon.  And I was in the final stretch of a month-long writing project.

So I needed to find a dinner entree that was easy and, if possible, make-ahead. Once again, I figured that the best solution was a makeover of a dish I had tried earlier in the year.

I had three candidates.  The most successful were the caraway meatballs I had made back in June.  In July, I had tried an odd one, called uštipci, from The Yugoslav Cookbook, that I didn't feel like repeating.  Those solid, fatty squares of uncooked bacon mixed in with the ground beef never did cook properly.

Then there was an intriguing dish called meat polenta, from the Progressive Slovene Women, one of my most trustworthy sources.  They were made from a paprika-spiced mixture of beef and cornmeal.   Quite a lot of cornmeal: a full cup added to a pound of meat. The finished product turned out dry and granular, because the uncooked cornmeal didn't soften.

Only afterward did it occur to me: Maybe "cornmeal" meant cooked polenta. If I made this dish again, I resolved to try it that way.

So perhaps this was the time.

I did some Internet research to see if I could find any other meatballs made with cooked cornmeal.  Mostly, I found Mexican meatballs, with small quantities of dry cornmeal added.  So maybe this meat polenta recipe wasn't even Slovenian.

But then I found something: A Slovenian meatball called mavželj. It sounded like one of those traditional novelties that isn’t made much anymore.  For good reason, since it starts with a pig's head.

To make mavželj, you start out by boiling the pig’s head and scraping off the meat. A few other organ meats are added, like the brains and lungs.  Then the meat is chopped, seasoned, and mixed with polenta. Seasonings can include onion and garlic, salt and pepper, cinnamon and bay leaf, according to the modern Slovenian master chef Janez Bogataj.  (His recipe seems to be mostly polenta.)  The mixture is shaped into balls and wrapped in pig’s caul, then baked.

So this dish wasn’t the product of some Slovenian American cook’s imagination.   It was simplified and sanitized, perhaps, but the chopped meat-polenta combination, heavy on the polenta, seemed to be well grounded in Slovenian tradition.

Well, I wasn't about to go shopping for a pig's head, much less a pig's caul!


I decided to stick closely to my original meat polenta recipe, but with cooked cornmeal, rather than dry.  Much as I was tempted to do a meat makeover, this was not the time for more turkey leftovers.  I would stick with a beef-pork mix, with a little more onion. The simple tomato sauce had been good the first time, but since we had some fresh mushrooms I decided to add those.  And this time I would bake rather than simmer the meatballs. 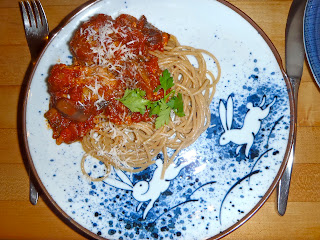 For the cooked polenta, prepare according to package directions.  I used the quick-cooking variety, which called for 4 tablespoons polenta stirred into 1 cup of boiling salted water, then cooked and stirred for about three minutes until thick. Let cool slightly.

To bake: Put a little sauce in bottom of medium rectangular dish.  Place meatballs in dish.  Add more sauce.  Bake at 375 degrees for about 1 hour.

Serve over spaghetti or noodles.  Sprinkle with grated parmesan cheese. 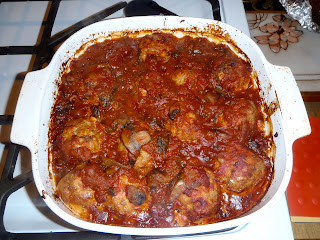 My heart sank when I saw yellow polenta oozing out of the meatballs, after they had been in the oven for awhile. But I poured more sauce on top.

The verdict: Amazingly, it all worked out.  The meatballs were tasty, even if the fat and some of the polenta did leach into the sauce. And there were none of those hard cornmeal granules, this time around.

As we were eating, my husband and I got into a long discussion about caul.   I had seen photos of caul-wrapped foods in a couple of my  European cookbooks. It looks liked a spidery white net. But what was it, exactly?

I thought it was similar to a traditional sausage casing. Part of the intestine. My husband thought it was related to the placenta, a sort of film or veil than can cover a baby mammal at birth. He'd heard about this from watching Jacques Pépin on television.

Turns out out we were both right.  Not the most pleasant of dinner conversations!

Still, the dinner was a success.

“There is something about the flavor,” my husband said. “I could smell it when I was up on the roof, cleaning the gutters.”  (We'd had heavy rains that night.)

What is that elusive flavor?  No cabbage in the dish tonight.  Was it simply tomatoes and paprika? Tomatoes without oregano and basil?

Central European umami or Slovenian soul, I guess.  Whatever it is, the smell and flavor are unmistakable. I had found it once again. 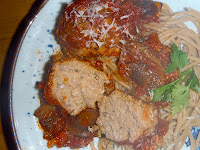