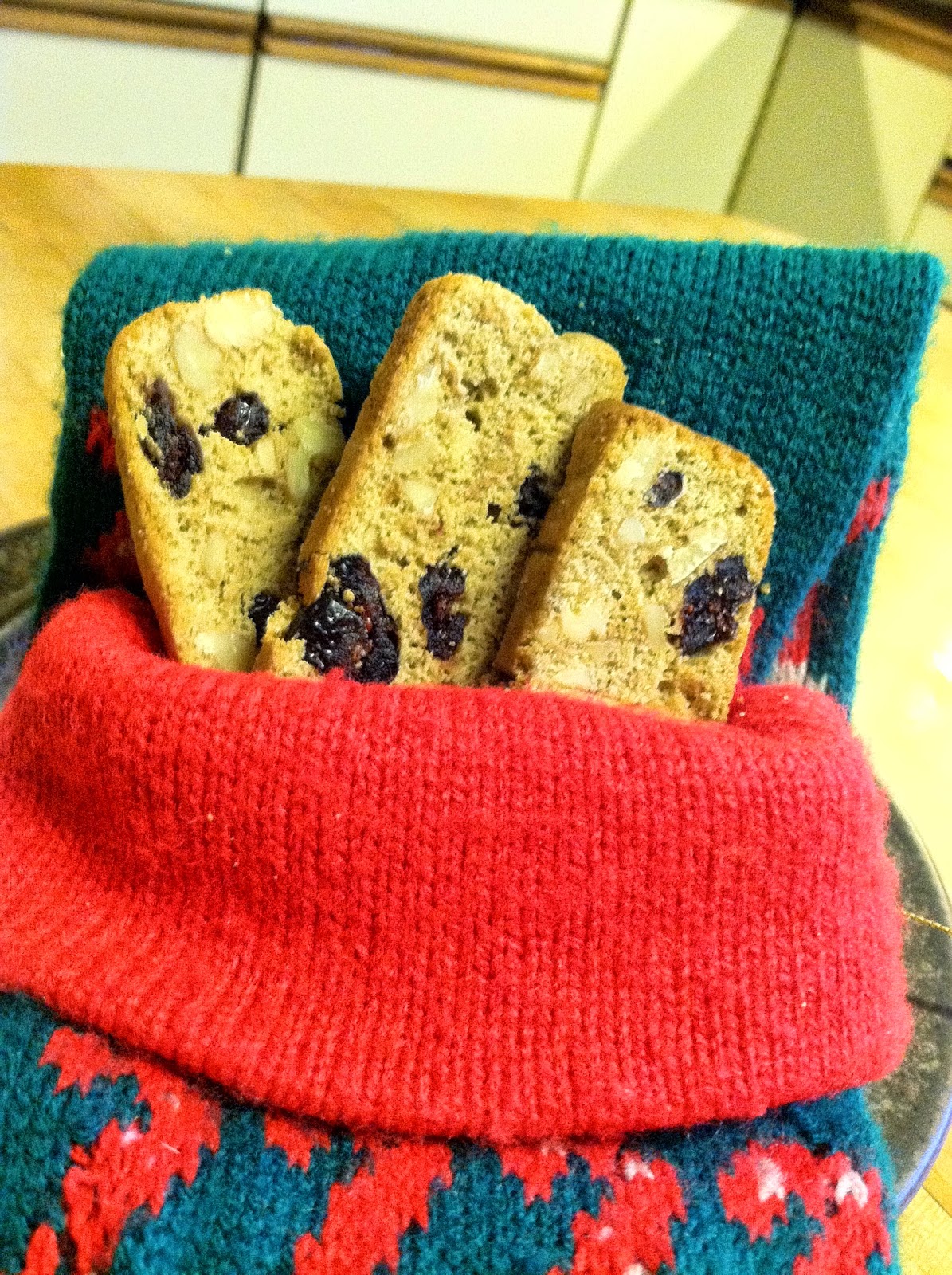 This is my latest experiment with domači prijatelj ("domestic friends"), otherwise known as Slovenian biscotti or mandelbrot. It is an adaptation of a traditional recipe that is perfectly suited for the winter holidays.

After I returned from a wonderful trip to Slovenia in July, I was determined to perfect my recipe for domači prijatelj. I no longer had any doubts that this was a traditional sweet and not some recent import. The giant, modern Maxi Market near our studio apartment in Ljubljana had a dazzling array of food, both traditional and modern, including a couple of shelves of what had become my favorite Slovenian cookie.

Back home, I returned to a couple of traditional recipes I had found online. This time, I resolved to follow the metric measures exactly, rather than use the imprecise formulas for converting weights to American volumetric measures. I also had a better idea, now that I had tasted the real thing, about the proper texture for the softer, single-baked version of biscotti that is most common in Slovenia.


I was particularly intrigued by a fat-free, egg-rich recipe I found online, thanks to a Slovenian blogger named Dr. Filomena. She had posted an image of a hand-copied recipe from an 1877 cookbook called Novih kuharskih bukev ("New Cookery Beech.")

This 1877 formula was easy to remember. Equal weights of flour, sugar, and chopped almonds (140 grams  of each)  and "a plate of chocolate" are mixed with "2 or 3" beaten eggs, lemon rind, cloves, and a few other spices that are hard to translate.

For my first attempt, I followed this old recipe closely, although I supplemented the chocolate with some dried apricots and cranberries (40 grams of each). It was good, and very close to the taste and texture of the domači prijatelj I had purchased in Ljubljana.  A simple cookie. Firm, but not hard or crisp.

The second time, I used brown sugar instead of white and walnuts instead of almonds. I skipped the chocolate in favor of dried cranberries.  I also sliced the cookies very thinly and did a second baking to make them crisp.

This one was a winner, even if the flavors might not be traditional. The brown sugar-cinnamon-walnut combination reminded me of Christmas. And the very thin slices, baked until crisp, gave this simple, low fat cookie a kind of elegance that makes it especially suited to the holidays.

The recipe below is for the variation I am calling Slovenian Christmas Biscotti.  But do feel free to experiment with different add-ins and flavorings, and to compare single and double baking. My previous post, which used a slightly different recipe, includes many variations to consider, along with somewhat more detailed instructions. 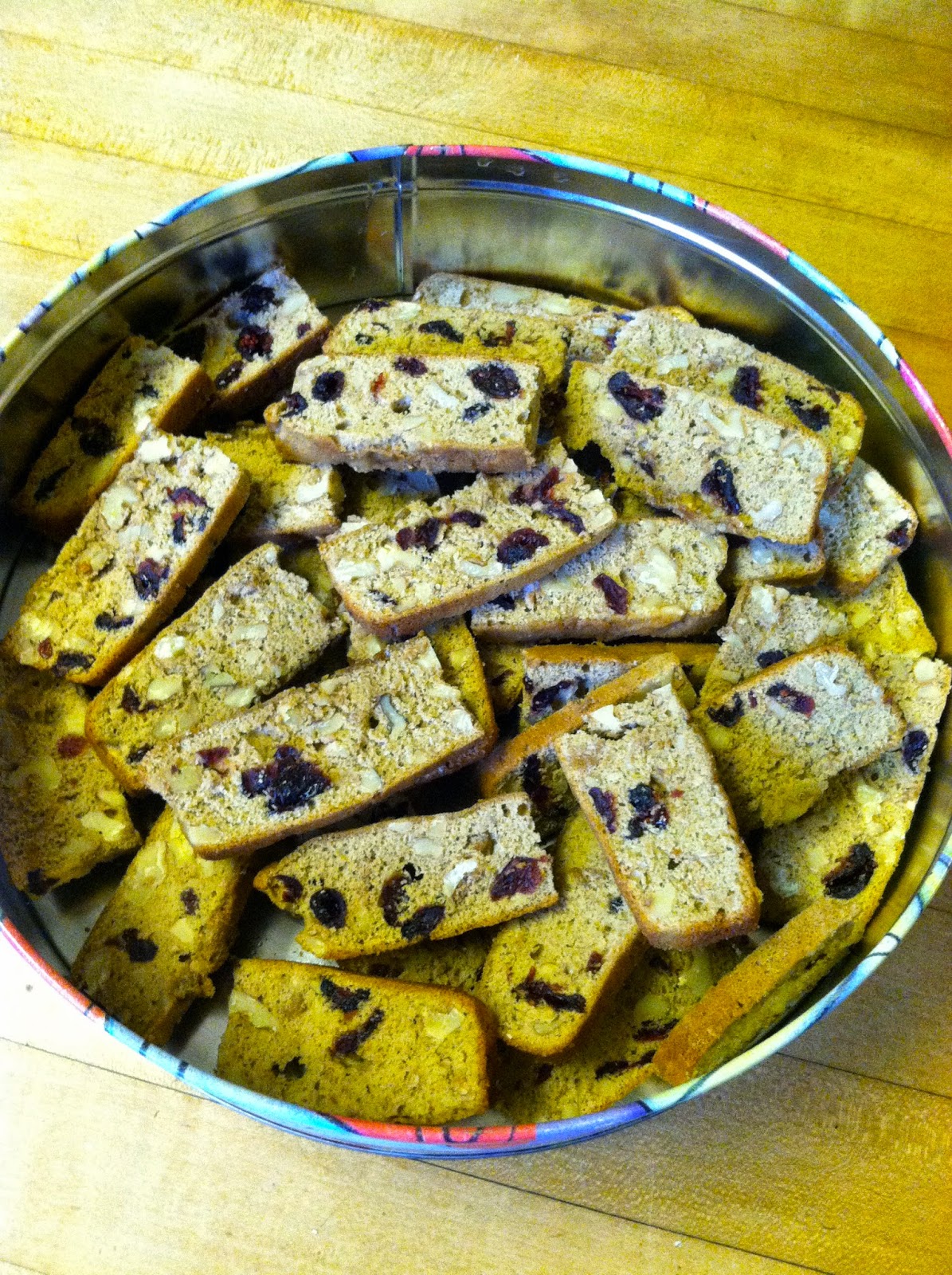 Note: feel free to substitute other nuts, dried fruits, or even chocolate, and to vary the flavorings.


Beat eggs and sugar until thick. Add extracts and cinnamon and beat. Fold in flour.  Stir in nuts and cranberries. Pour the batter into an oiled rectangular pan (about 7 x 9 inches) that has been lined with parchment. Bake at  350 degrees for 20 to 30 minutes, or until firm. Remove from oven and let cool slightly.

Turn the cooled cake out of the pan. It will resemble a firm sponge cake or genoise. Cut it lengthwise into two pieces, then slice. For the more traditional Slovenian style, cut into slices that are about 1/2 inch thick and let cool on a rack. Or try this elegant twice-baked holiday adaptation: cut into very thin slices (under 1/4 inch) and bake for about ten more minutes or until firm. Let cool. Enjoy! 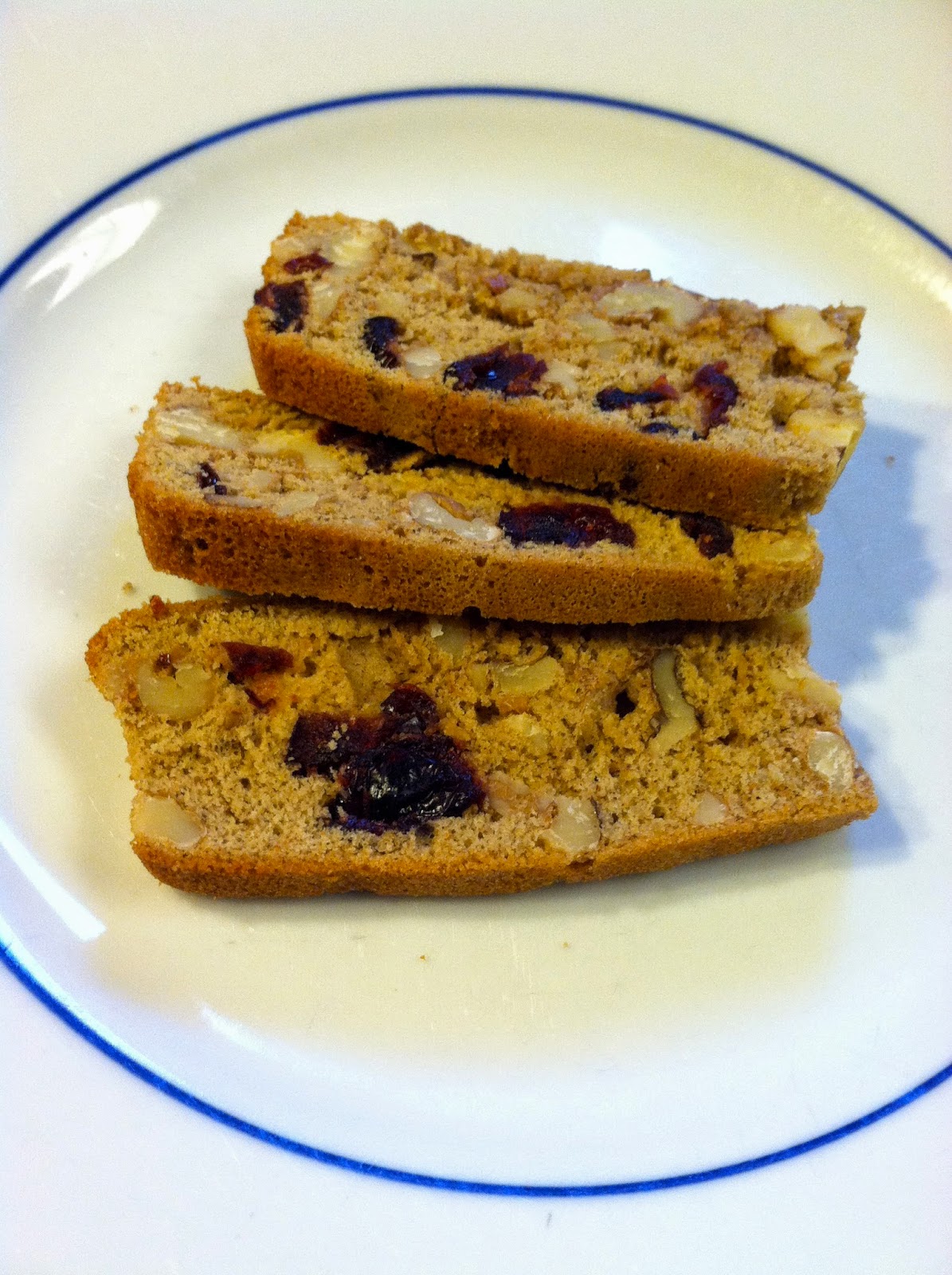