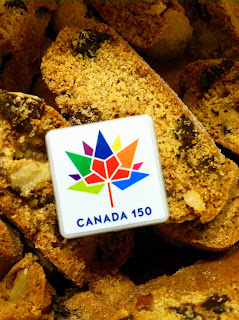 When I went looking for a Passover mandelbrot recipe, I didn't expect to end up in Canada. But that is where I landed. At a recipe featured in the pages of The Toronto Star.

Why was I surprised? Canada is a multicultural society that rivals the United States in its inclusiveness. That point was driven home during a couple of recent visits I made to the Canadian Consulate in San Francisco. (That's where I got that nice maple leaf pin in the photo.)

Naturally, all the signs at the Consulate were in French and English. But it was more than just that. The Consul General is Asian. The man at the front desk had African heritage. The documents I needed were notarized by a woman with the familiar lilt of Eastern Europe in her voice. Meanwhile, a woman in a hijab and her husband were planning a trip and needed help with a visa. Canadians, each and every one.

Passover desserts are notoriously challenging, because conventional flour and leavening are prohibited. I particularly love mandelbrot, a traditional Jewish sweet that is a close cousin to Italian biscotti and Slovenian domaci prijatelj. I was pretty happy with the Passover version I'd adopted some years ago, made with matzo cake meal and potato starch, generously lightened with eggs. But it called for butter. This year, I wanted to find a recipe that used oil. It was mostly for reasons of health and convenience, but also because a butter-free version could be served with both meat and dairy meals.

The Passover mandelbrot recipe in the Toronto Star looked similar to the one I had been using. It turned out to be even easier to work with, probably because of the suggestion that the dough should be chilled for an hour before shaping. I made just a few small changes in the flavoring and add-ins, as indicated below. It came out firm, crisp, and tasty.

In fact, you might not even guess it is a Passover dessert.

And if you decide to call it a Slovenian domestic friend, no one will be the wiser! 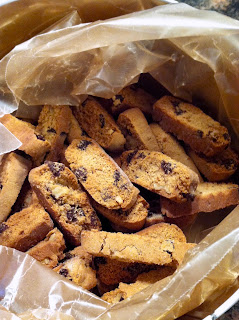 * If you can't find matzo cake meal, grind regular matzo meal in a blender until fine.

(To follow the original recipe: Use white sugar, the grated zest of an orange and almonds instead of walnuts; skip the chocolate chips, cinnamon, and almond extract.)


Sift dry ingredients into a bowl and set aside. Beat oil and sugar then add eggs one at a time, beating until light. Add vanilla and almond extracts. Stir in dry ingredients. Fold in nuts and chocolate chips. Mixture will be soft and sticky. Cover and refrigerate for an hour or more.

Divide chilled dough into two portions. Dust a flat surface with matzo cake meal and roll each portion into a fourteen inch log. Place each log on a parchment lined baking sheet and flatten so it is about 2 inches wide. Top with cinnamon-sugar mixture.