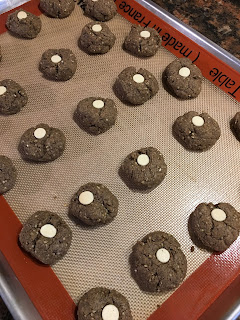 Those Easter eggs with natural dyes were not my first nod to my Slovenian heritage during this time of cooking in confinement. Before that, I had made an impromptu batch of cookies that I consider Slovenian in spirit, because their defining feature is the generous use of buckwheat.

I had gotten the urge to bake after we had been sheltering in place for two weeks. We were running low on white flour--a staple that I discovered had become scarcer than toilet paper. I finally placed an order on Amazon for the best option I could find: a ten pound bag of Italian 00 flour, which wouldn't arrive for several weeks.

My husband was convinced we must have extra flour somewhere. He hinted that it might be illuminating if I went through all those bags of flour and grain in the freezer, the fridge, and the pantry, to see what we really had.

So that became my morning project. I pulled everything out and lined those bags up alphabetically. They formed a line that snaked around most of our available counter space! 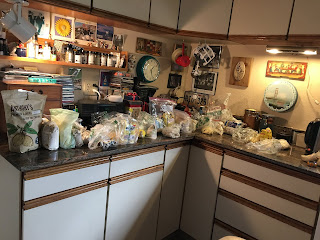 There were seventeen varieties of flour and related grains, in multiple bags, lined up from A to W. Almond Flour to Wheat Flour. And in between, some novelty items I used once or twice and forget about (brown rice, coconut, gluten-free, soy) and some familiar staples (buckwheat, corn, oats, rye.)

The wheat flour was a category in itself. We had semolina, whole wheat flour, and organic pastry flour. But the back-up supply of all-purpose flour was not quite what my husband had predicted. It turned out to be the remains of one small bag.

What we did have was plenty of buckwheat.Three different bags of buckwheat flour, bought in bulk from the corner market, along with a rather odd product (at least to our taste) called creamy buckwheat cereal, described as cracked raw buckwheat by the manufacturer.

So I decided to make buckwheat cookies, since that would preserve our dwindling supply of white flour and take advantage of the generous supply of buckwheat.

I didn't consult a recipe. I had finally figured out the proper way of adapting the Slovenian recipe for ajdovčki (buckwheat-nut thumbprint cookies) and I had made those rich little morsels a number of time. I now had the general idea of how to make a part-buckwheat cookie.

So I just tossed together what seemed like a standard plain cookie recipe, working from memory and experience, and using what was close at hand. (I wasn't in the mood for any more kitchen searches!) When I couldn't find our cinnamon, I substituted an Indian spice mix. We didn't have any fresh walnuts, but I had discovered a small bag in the freezer that contained the cinnamon/sugar/ground walnut mixture that was left over from my holiday potica baking. Brown sugar, because that's all we had. And I decided to throw in a little of that cracked buckwheat cereal. Rum, because it always helps. And on top, some white chocolate chips, since I wouldn't be using cocoa.

Those cookies turned out to be pretty good. Compared to the buckwheat thrumbprints, they were plainer, but with a stronger buckwheat flavor, since I used a half-and-half mix of flours. A little sweeter, but less rich, with fewer nuts and less oil than the butter used in the earlier recipe. No chocolatey flavor.

I would make this impromptu recipe again--but without the addition of the buckwheat cereal nuggets. Those little crunchy bits were much in evidence--and as time went on, they must have absorbed moisture from the rest of the cookie, because they had turned into rocks after a week in a storage tin. My husband reminded me that this was not an opportune moment for a cracked tooth.

These were hard but tasty cookies for hard times. 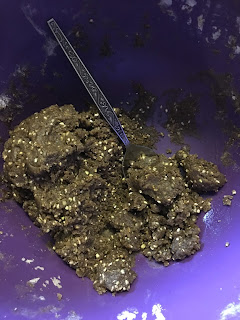