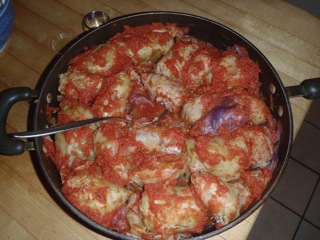 Here it is!  This was my inaugural menu for the Josephine and Jožefa project.  The first week of January, I set out to begin my year of cooking ethnically.  Or, to be more exact, Slovenian-ly.

What to say about this first menu?  I decided to make a main dish and a side dish from Woman's Glory. Those are the starred dishes.  For the stuffed cabbage, an old favorite, I tried to combine the best of the three or four versions offered.  Naturally, I made a few changes.  I couldn't bring myself to use 2/3 cup of fat to saute the onion!  As for the filling . . . well, we are not big meat eaters, but I  figured I could go along with the pork and beef. But we draw the line at veal in our house, so I substituted ground turkey for that part of the mix.

I figured I would "cheat" with dessert, since I still had leftover Christmas potica. The Serbian cornbread and coleslaw, also leftover, were extra.  I figured they fit pretty well, ethnically speaking.  Besides, the spirit of these vintage American ethnic cookbooks was practical and eclectic. You used what was at hand.

I will be posting the recipes soon.  My Slovenian-style stuffed cabbage is still a work in progress. (This version came out tasty but under spiced.) The cucumber salad was quick and easy: sliced cucumbers, sour cream mixed with yogurt and garlic, along with a little paprika, probably the one Slovenian touch.

As for the potica?  That's the one and only Slovenian food I grew up eating and preparing. You can find my potica recipe included in a long essay I wrote over on my  more "literary" blog.  It's called Potica, Bread of Memory.

This year's Christmas potica included one new touch: I added dried cranberries.  This might not seem like much of a stretch, since many versions do include raisins.  But my family doesn't do that.   So it was a bold move on my part.  Pretty well received, too. 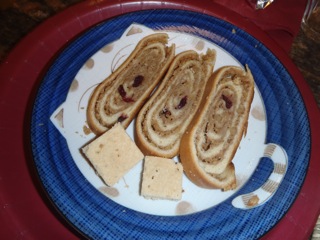