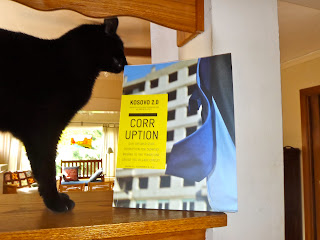 No, I am not currently in Kosovo.  Neither is Trent, our black cat.

But I am delighted to say that my Slovenian cooking story has found its way there, thanks to the young journalists who edit Kosovo 2.0, a multimedia website and print magazine that emerged a couple of years ago.

It feels like coming full circle, to write about my Slovenian roots quest for a Balkan audience.  Kosovo, like Slovenia, is a small nation that was once part of the former Yugoslavia. And it's pretty exciting to see my words in English, Albanian, and Serbian.

I have a post up in the Kosovo 2.0 website blog today.  It's called "A Culinary Homecoming."   The longer version of the article, complete with recipes and photos, will be in the upcoming issue of the print magazine, available in about a week.  It's a beautiful, glossy (sometimes edgy) publication.  I feel proud to have a spot in it.

In the photo above, you can see our cat Trent looking over the last issue, which had "Corruption" as the theme.  I think he's impatient for the next installment.

A Slovenian saying about cats in the kitchen provided the opening for my blog post.  It struck me as the perfect metaphor for my family's ambivalence about our ethnic heritage.

The literal translation is "to walk like a cat around boiling porridge." In other words, to pussy foot around.  Or to beat around the bush.

To read the rest of the essay, go here: http://kosovotwopointzero.com/en/blog/people/a-culinary-homecoming-15-05-2012

Since it's Tuesday, I have to figure out what to cook for my weekly Slovenian Dinner.  I'm tempted to make one of those dishes that originated from points farther to the the south and the east.   Maybe a nice pita or burek. . .