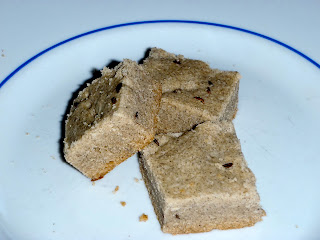 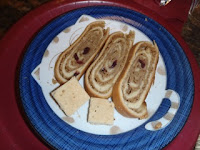 In my family, we have two treasured Christmas baking traditions: Slovenian potica and Scottish shortbread.

These were both straight out of the "grandma-who-doesn't use-a-recipe" tradition.  But that is where the parallel ended.  My Slovenian American grandma was a wonderful cook and baker.  My Scottish-born grandma, my father's mother, was not.

As a result, my family shortbread tradition is both traditional and idiosyncratic.  The ingredients are classic : sugar, butter, and flour, with a touch of salt.  But the method is not.

My grandmother believed in long kneading.   My father staunchly upheld this tradition. The idea was to work in as much flour as possible.  The goal was not tenderness.  He wanted to produce a hard, dry cube of shortbread.   He dismissed anything tender or crumbly as Lorna Doones.   In other words, ersatz shortbread cookies for Americans.

Our family shortbread is mildly sweet, with a rich, buttery taste.  But it also includes a fair amount of flour.  I have been surprised to discover that so many American recipes are extremely buttery.

I have now discovered why.

I have just learned a fascinating bit of shortbread lore. The classic Scottish shortbread recipe has a 1:2:3 or 1:2:4 ratio of sugar, butter, and flour.  A touch of salt is optional.

But here is the catch. The ratio refers to British-style measures, which are all by weight, and not by volume.

So traditional Scottish shortbread does NOT mean a cup of butter to a cup-and-a-half or even two cups of flour.   Scots are frugal people, for heaven's sake!   This, on the other hand, would be a traditional recipe:

Last year,  I wrote a long essay about my family's shortbread traditions.  The recipe is here, if you would care to take a look.  It turns out to be very close to the 1:2:3 or 1:2:4 proportion.

Our family tradition is very strict when it comes to shortbread.  We stick with the basics. So my husband was shocked when I told him about my plans to attempt a Scottish-Slovenian fusion.

Here is how it happened: We were invited to a dinner party.  It was early December, and I hadn't yet done any holiday baking.  Normally, I would have made a batch of shortbread by now, since it stores so well.  So this seemed like the perfect opportunity.  Some shortbread for the party and some to keep for later.

But I also wanted to make a dish that would incorporate some Slovenian traditions, or at least Slovenian flavors.  I couldn't figure out a way to use paprika in shortbread.  But I immediately thought about caraway seeds and buckwheat flour, two staples in my ethnic kitchen.

Caraway seed, I knew, is used in some traditional Scottish shortbread recipes. I had never heard of buckwheat flour. But small quantities of oat, corn, or rice flour are often added, to provide crispness.

I did an Internet search and found a number of recipes for buckwheat shortbread.  Probably not traditionally Scottish, but it sounded like an option that might work.

I used the recipe in the link above as a foundation and came up with the recipe that follows.


Sift flours, caraway seeds and salt, if using. Set aside.

Cream butter by hand on a board or covered surface. Add sugar and knead till smooth and no grains remain.  Knead in flour mixture, slowly.  Knead for at least 15 minutes, adding more flour until no more can be absorbed and the dough is smooth.   (I had about 1/2 cup flour remaining.)

Pat into an ungreased pan, to a thickness of about 1/2 inch.  (I used a 10 inch round fluted Le Creuset pan.)

Sprinkle with 1/2 t. more caraway seeds.  Prick the dough with a  fork.  Dough can be chilled before baking.

I used a slightly different baking method this time. A number of recipes suggest longer cooking at a lower temperature, after an initial start at a higher temperature.  This worked out well.

Bake at 350 degrees for 15 minutes, then lower to 250 degrees.  Bake for 1 hour in all.   The dough should brown only minimally.  If shortbread seems too soft, lower heat and put back into oven.

An important note about the color: Some brands of buckwheat flour, including the one I used, are very dark when uncooked.  So don't be surprised if the shortbread becomes lighter with baking.  (See the before and after pictures above.)

Cut into squares before cooling.

If you like a hard shortbread, as we do, you can bake for even longer, at 200 degrees. Or, to be safe, you can put the shortbread into the 200 degree oven briefly,  then turn off the heat and leave the oven door propped open. The shortbread can be left to dry out in this way for many hours.

The verdict:  Tasty, with an elusive, earthy flavor.  Nice and crisp.

The shortbread was well-received at the dinner party.  Of course, someone did ask: So why is it green?

It’s not exactly green.  More like a grey-brown, instead of the pale gold of traditional shortbread. But that's the price of innovation.

I haven't quite decided whether to share this one with the rest of my family at Christmas.  But it is a unusual and flavorful variation.