Pumpkin Pie with Pumpkin Seed Oil and a Gingersnap Crust 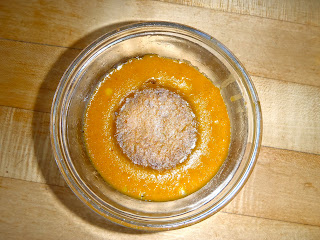 I had a limited role for Thanksgiving dinner: the pumpkin pie and the cranberry sauce.  My husband was making the rest.

I wanted to slip in a few Slovenian touches.

I toyed with the idea of pumpkin strudel.  I knew it was traditional in Slovenia, and in a few other places in Eastern Europe.  But I knew that would be pushing the limit with my family.

So it would be traditional pumpkin pie—but I would sneak in a secret Slovenian ingredient: pumpkin seed oil in the filling.  And as long as I was innovating, why not try a gingersnap crust?

For the filling, I simply adapted the traditional recipe that you can find everywhere.  For the crust, I used the recipe from the box of our favorite brand of gingersnaps. 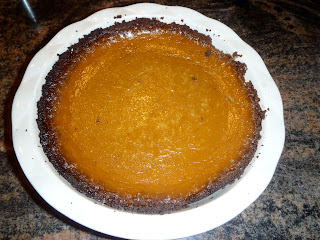 Pumpkin Pie with Pumpkin Seed Oil and a Gingersnap Crust

Crush the gingersnaps finely, using the food processor or a rolling pin.  Mix in the sugar and butter and pat the crumbs into a deep 9 inch pie pan.  Bake the crust for 8 minutes at 350 degrees.  Let cool.

Full disclosure: I had some trouble with this crust. In the oven, it turned puffy in the center and started to slip down the sides.  I had to pat it into place with a paper towel, before setting it aside to cool while I made the filling.

Mix the filling ingredients together well.  (I like to leave the eggs for last, so that I can safely taste and adjust the seasonings.  Just don't forget to add them at the end!)   Pour filling into the pie crust.

I had a little filling left over.  So I oiled two custard cups, put a gingersnap in the bottom of each, and divided the filling between them.  The gingersnap immediately floated to the top.  I put the custards in a hot water bath before putting them in the oven.

Bake the pie at 350 degrees for 1 hour.  (Custards will take less time, about 30 minutes.) Serve with sweetened whipped cream.

The pumpkin pie was quite a hit.

The combination of pumpkin filling and gingersnaps really works.

Everyone loved the crust.  It was hard and almost candy-like, as though it had started to carmelize. Afterward, we noticed that the crust recipe had suggested a dip in hot water after baking for easier removal. So I suspect there may be an ingredient in this "healthy" gingersnap brand that affects the crust.  Or perhaps the answer is finer crumbs and a little less butter.

For me, the pumpkin filling was the real standout. The pumpkin seed oil had a subtle but pronounced effect. It created a smooth, unctous texture and a deep, rich flavor.  No one guessed that it was the secret ingredient.

This is one cooking experiment that I plan to repeat!