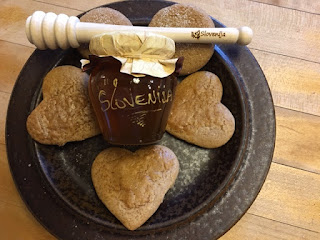 On our recent trip to Slovenia, bees and honey seemed to be everywhere. My husband and I saw old-fashioned beehives displayed in museums. We sampled honey in the Central Market. And we had the great pleasure of meeting the beekeeper father of my chef friend Mateja. (You'll be hearing about her amazing restaurant in a future post!) 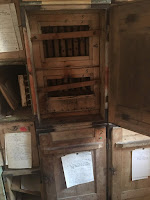 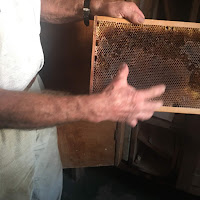 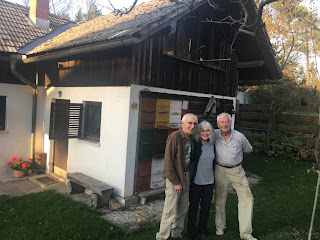 We returned home with plenty of honey-related souvenirs. Among them was a half-eaten package of medenjaki, the simple honey cookies we had also enjoyed on a previous trip. This popular treat is usually described as "gingerbread" in English, but the mild flavor seemed much closer to a British tea biscuit than to the much sweeter American style, in which the flavors of molasses and ginger seem to dominate. I wondered about those fancier versions of medenjaki, often shaped into hearts and elaborately decorated, that we had seen in the market and in tourist shops but had never actually tasted. 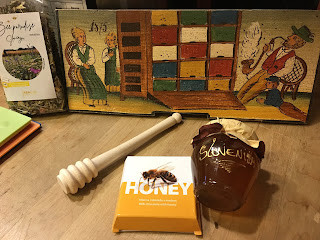 I had tried to make medenjaki five years earlier during the holiday season, but I wasn't satisfied with the results. So I decided to try again this year, a few days before the annual Christmas party at the Slovenian Hall in San Francisco.

For guidance, I drew on two cooking authorities, one American and one Slovenian.

My first step was to turn to the Slovenian Union of America (formerly the Slovenian Women's Union of America), the venerable organization that put together Woman's Glory: The Kitchen, the classic mid-century cookbook that inspired my own culinary journey. Last year, the SUA also gave me the great honor of being the first recipient of their new Literary Award. (Submissions are now open for 2020!)

The SUA recipe for medenjaki, which can be viewed on the organization's website, was contributed by president Mary Lou Voelk. Her instructions are clear and detailed and her enthusiasm is contagious.

But then I discovered the Ana Roš recipe posted on the "I Feel Slovenia" tourist website, which has a whole section devoted to the country's rich tradition of beekeeping. I could not pass up a chance to try what the Slovenian government declares are "the world’s best female chef’s favourite honey biscuits." Unfortunately, this celebrity chef's recipe, while intriguing, offers minimalist instructions.

As you might expect, the Slovenian recipe is somewhat less rich than the American version (more flour and less egg, butter and sugar.) It also calls for baking soda instead of baking powder for leavening. The biggest difference, however, seems to be in the flavorings. The SUA recipe uses familiar sweet spices (cinnamon, cloves nutmeg) along with orange zest. Ana Roš, on the other hand, skips the citrus but puts together an interesting and less usual spice combination that I was eager to try: cardamom and anise, along with the familiar cinnamon and cloves. Note that neither one includes ginger!

So I created a hybrid. Somewhere in between the American and Slovenian recipes in terms of richness, with Ana Roš's intriguing flavorings and Mary Lou Voelk's clear approach to preparation and baking.

The medenjaki turned out very well: Just sweet enough and with a distinctive flavor from the spices, which sets them apart from conventional American gingerbread cookies. I am happy to report that they were well-received at the Christmas party, with nothing left at the end of the evening but an empty container. Fortunately, I had some left at home, but I suspect I'll be making another batch before the year is over! 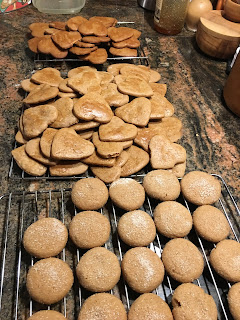 
In a saucepan, warm up the butter and honey over medium heat until the butter is melted. Remove from heat and stir in sugar until dissolved. Set aside to cool. When cool, beat in the egg.

While the liquid mixture is cooling, prepare the spice mixture. If using whole spices, grind with a mortar and pestle or a spice grinder. Combine spices in a small bowl.

Sift spice mixture, baking soda and flour into a large bowl, Pour liquid mixture into the flour mixture and stir well until dough forms a ball. Knead briefly, wrap and refrigerate for an hour or two.

To make cut-out shapes, roll to a thickness of 1/4 inch (or a little thicker if desired) and cut out. Brush with egg white glaze. If using a mold, you might want to add a little more flour. Easiest of all: shape dough  into walnut-sized balls, rolled in granulated sugar, and flatten with the bottom of a glass before baking.

Bake on lined baking sheets at 325-350 degrees for 10-17 minutes. Watch carefully. The timing will depend on the thickness of the dough and on whether you are aiming for a cake-like texture or something closer to a crisp gingersnap.