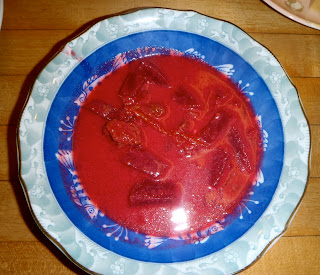 Lost Kosovo Kugel and the Politics of Food 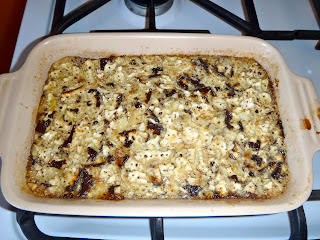 In that spirit, I decided to put together a dessert for my Week 41 Dinner, using leftovers.

The leftover in question:  An opened box of chocolate-covered matzo. Languishing in my pantry since Passover.  Six months old.  Begging to be used. 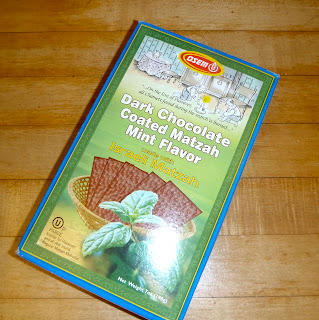 Granted, the key element in this dessert did not exactly qualify as Slovenian.

Chocolate-covered matzo is a Passover novelty, probably designed with Jewish children in mind. It is an amusing way of circumventing the austerity of unleavened bread, without violating the dietary laws.

For six months, a box of the stuff had been sitting in our pantry. It had quite a pedigree.

According to the package, the matzo itself had been baked in Israel.  The dark chocolate mint coating was added in New Jersey.  I purchased it in California, just before Passover. I planned to send it to our journalist son in Kosovo, along with some homemade mandelbrot.

But the package never arrived in Kosovo.

Eventually, the lost package re-appeared on our doorstep, looking much the worse for wear. 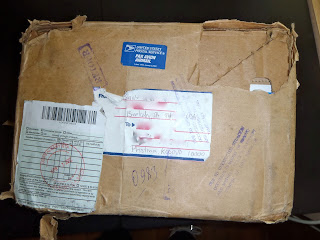 Inside, my homemade Passover mandelbrot had survived intact. But when when I opened up the commercially made box of chocolate matzo, it was a sorry sight. 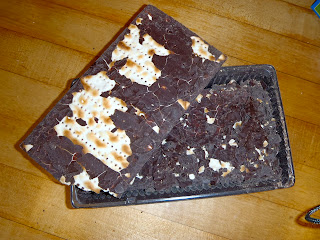 Unfortunately, I had failed to address the package properly.  I should have sent it “via Albania” or with the address written like this: Pristina (Kosovo), Serbia.

Kosovo as an independent country still has a murky status, at least in some quarters.  So the package was intercepted in Serbia, where the post office folks sent it back to California, with a stamp that referred to "an unexpected situation.”

It gives “the politics of food” a whole new meaning.


Meanwhile, I had a box of matzo crumbs and minty dark chocolate flakes. But I hated to throw it away.  So there it sat, growing stale in a drawer.

On Week 41, I was seized by a peculiar inspiration.  I would turn that aging chocolate matzo into an impromptu dessert.  I had in mind a sweet kugel, a traditional Jewish pudding that is made with noodles or, at Passover, with crumbled matzo.  You can crush the matzo yourself or purchase the prepared variety, called matzo farfel.

A sweet kugel is something like a dense bread pudding.  So I figured it would be easy to inprovise a recipe. How could I go wrong?

Soak the crumbled matzo in milk for 10 minutes to soften.  Stir in the sugar,  a pinch of salt,  and the beaten eggs.  Bake in a buttered 6x9 ceramic dish at 350 for 40 minutes. Serve warm or cold. 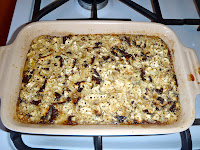 I don't know what went wrong with this.

So?  It was supposed to be a sort of eggy custard.  Nothing wrong with that.

But he was right.  Something was amiss.  The kugel was watery.  The egg seemed to have coagulated in a strange way.  Maybe it was the mint flavoring.

But we dutifully ate it in small portions, over the next week.  On that final night, I agreed: it had developed a strange eggy taste.

This is one Slovenian-Jewish fusion dish that won't be repeated. 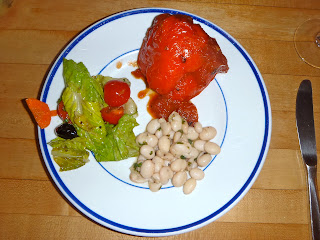 
After my recent excursion to the FoodBuzz Blogger Festival, it was a relief to get back to the simpler, down-to-earth cooking traditions of my Slovenian American forbears.

But that foodie festival did strengthen my resolve to continue working on healthier versions of the traditional recipes I had been making.

Stuffed peppers, one of my early dishes, was a prime candidate for an overhaul. Although it was a successful Week 7 entree, those peppers had been a little too firm. I had already resolved to parboil them, and probably to leave them whole, the next time around.

Now, with an eye to a healthy makeover, I made a few more changes.  For starters, I would make an all-turkey filling, instead of the beef-pork-turkey mixture I had used before. That meant increasing the spices, as I had done in my recent attempt at healthy turkey cevapcici.  And why not substitute high-protein, flavorful kasha for the white rice?  It might not be traditional, but it would be in the Slovenian spirit.

Otherwise, I followed my original recipe, although I did add a little wine to the tomato sauce.

When I went to the market in the morning, I found a surprise: fresh cranberry beans, otherwise known as Roman or borlotti beans.  By now, the dried version had become a staple in my Slovenian kitchen.  I couldn't resist buying these tasty beans fresh, although I wasn't quite sure how to prepare them. 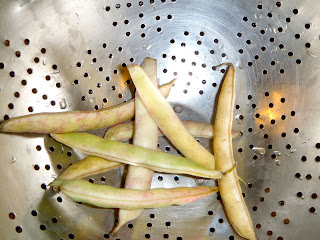 And for dessert, I invented something new: Lost Kosovo Kugel.  But that's a story in itself. 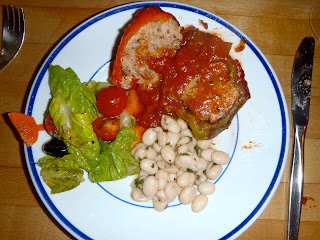 About 8 fresh peppers, assorted colors (I used half green and half red)

To prepare the peppers: Remove stem ends carefully and set aside to use as lids.  Clean out the inside of each pepper.  Parboil for 10 minutes in boiling salted water.  Drain and cool.

To make filling: Brown onion and garlic well in olive oil.   Set ¼ cup aside to use in sauce. Mix the remaining onion-garlic mixture with the rest of filling ingredients.


To make sauce: Mix all ingredients together and simmer for about fifteen minutes. Taste and adjust seasonings.

To assemble: Put a little tomato sauce in the bottom of a Dutch oven or other large casserole dish.  Arrange peppers inside.  Divide filling among them. (You may have some filling left over.) If you like, add the previously removed  “lid” on top of each pepper. Add more sauce, almost to cover.  Bake at 350 degrees, for 1 hour or more.  Add more sauce if needed. 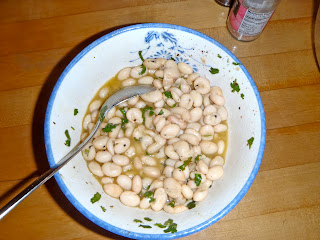 Shell the beans.  Rinse and drain in a colander.  Admire the pretty pink mottling, because it will disappear once the beans are cooked!   Simmer in a pot of boiling salted water for 10-20 minutes, until tender.  Drain.  Toss with a dressing of olive oil, lemon juice, parsley, garlic, salt and pepper. 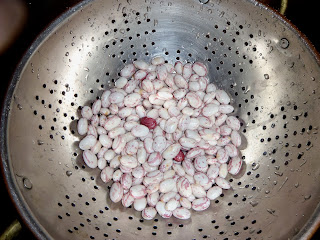 The verdict?  The stuffed peppers were delicious!  The peppers themselves benefited from parboiling and then a longer time in the oven.  We didn't miss the beef and pork in the filling at all.  The addition of kasha worked well.  It created the same dense texture as the traditional rice-meat mix, but with an intriguing hearty, smoked buckwheat flavor.

The beans were a nice, mild complement.  The flavor was even better the next day, after they had marinated in the dressing.

As for that  Kosovo Kugel, I think perhaps it should remain lost.  To learn the full story, read on!