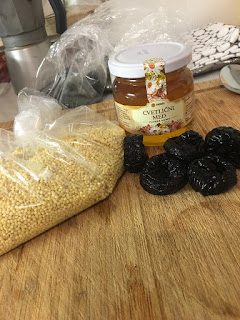 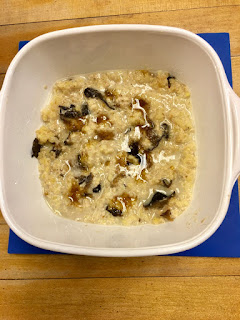 Exactly two weeks ago we returned home to California. And I feel homesick for Slovenia.

Every night, I have traveling dreams. Sometimes I am back in Slovenia. Other nights, the settings are unfamiliar. Or it turns into time travel, where I am joined by my late parents or the little boy versions of my adult sons.

How to weather this difficult transition? As always, food is part of the answer.

When we dismantled our temporary Ljubljana kitchen, the perishables went to our friends Silvia and Rick who lived across the street. We made a point of finishing up the small bottle of fiery Kamnik-style slivovica (it's flavored with pine needles!) our friends Tina and Miha had given us. But my husband was convinced that we could bring some of our supplies back to California. I had my doubts, but he managed to pack everything up and carry it through US customs. (I didn't ask too many questions!)

You can see some of our haul in the photo below. Potica from the amazing restaurant run by my friend Mateja (more about her in a future post) and the remains of a loaf of walnut bread from a wonderful Ljubljana bakery called Osem. An unopened package of instant buckwheat žganci mix from the nearby grocery store, plus some cinnamon and a cannister of sea salt. We also had some leftover Idrija žlikrofi from a final lunch at a cool food truck called "Stara Šola"--Old School! And from an earlier trip to the Central Market, packages of prunes and millet groats 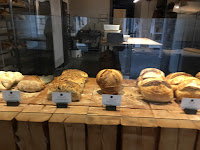 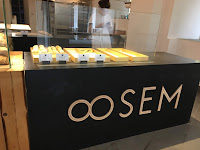 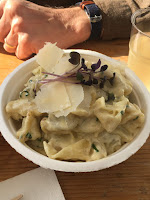 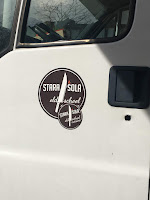 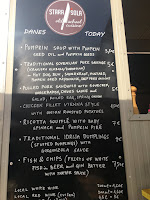 Prunes and millet? Yes, you read that right. Those were the two key ingredients in a new dish I tried to make in Ljubljana, with a recipe that was given to me by a lovely woman named Darja, the neighbor of our American friends.

A few days after our arrival, Darja had invited us to her airy apartment for "a coffee." In Slovenia, that translates into more than a warm beverage. It means a nice long visit, with a little food and plenty of conversation. Our hostess served us chestnuts and a friend's homemade cookies, and she sent us away with a jar of her homegrown marigold tea. I don't recall how or why the subject of millet porridge came up, but she e-mailed me a recipe for it the next day.

Millet porridge with prunes is a traditional Slovenian dish. I had seen a number of recipes for it, including one on the government's tourist website. It is a hearty dish that can be served for breakfast or as a dessert. I had never tasted it and was not really tempted to try it. Although I had used millet in Slovenian cooking, the dishes had always been savory ones. And I never did have much use for prunes, aside from a few traditional Jewish recipes.

But Darja's recipe looked simple enough and it actually sounded appealing: Millet, prunes, cinnamon, and honey, simmered in milk. I figured the only challenge would be to make sure the milk didn't scorch. I decided to give it a try.

Somewhere along the way, things went wrong. Suddenly the milk began to separate, as though I was making fresh curd cheese.
The porridge ended up dense and dark, with white granular lumps that weren't just grains of millet. Along with the texture problem, the sweetness was overpowering, even though I had added just a tablespoon of honey.

"Just pretend it's curds and whey," I urged my husband.

But he wasn't convinced. So I was the only one who continued to eat my special porridge for breakfast, in very small portions.

A day or two later, when I told Darja what happened, she had an immediate reaction:

Since she used to work as a food safety inspector, the question was an obvious one. No, I didn't think so. I suggested another possibility: Perhaps that good Slovenian honey was acidic enough to curdle boiling milk. 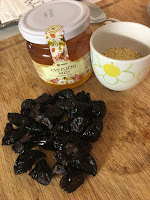 "The honey?" She sounded puzzled. "But you don't add that until afterward."

Ah-ha. So that was my mistake. "Honey to taste" meant each person adds a drizzle of honey at the table, as desired. Oh, and one more thing: She also used the cut-up prunes "to taste"--which meant less than what the recipe called for.

I thought the dish held promise. Even though my first attempt was flawed, the flavor itself wasn't bad. And maybe the millet and prune combination had contributed to my having felt particularly good during our stay in Slovenia, with none of those digestive upsets that often plague international travelers. The two foods offer some important health benefits. Both are high in fiber, as well as other vitamins and minerals. Millet, technically a seed rather than a grain, is gluten-free and high in protein.

So a few mornings after our return to California, I tried again. I incorporated Darja's tips, using fewer prunes--and no honey during the cooking. I also added an initial step that some other recipes suggest and perhaps is supposed to go without saying: I washed and drained the millet before cooking. I cut the recipe in half, just in case I had another disaster. And I waited anxiously for the moment when the milk would start to curdle. 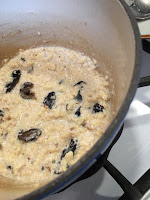 The dreaded moment never came. I don't know what made the difference, but this time the porridge was a success. No curdling and no excessive sweetness. Just hearty comfort food, with the nutty taste of millet balanced by the mild sweetness of prunes, honey, snd cinnamon--and by the even sweeter memories of people and places that no longer felt so far away. 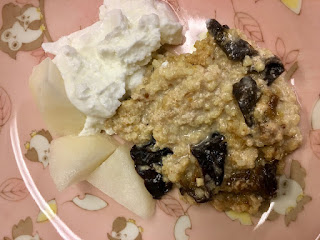 And salt to milk and slowly bring to a boil. While the milk is heating, rinse and drain the millet and cut the prunes into small pieces. When milk reaches boiling point add millet, prunes and cinnamon. Lower heat and simmer for about 20 minutes, stirring periodically. Divide into two dishes and drizzle with a little honey. Serve with more milk or yogurt. Makes one generous serving--or two servings, for timid Americans :-)