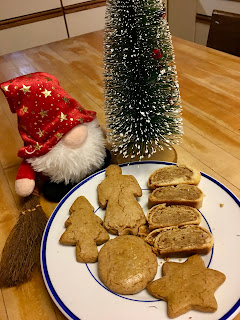 Pisani Kruh, with a touch of American Anadama Bread 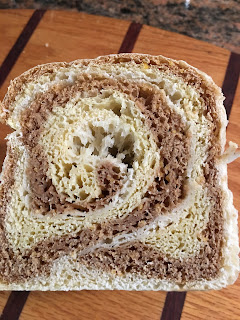 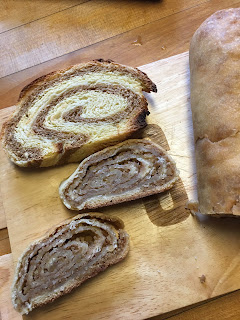 A few weeks ago, I had an urge to make pisani kruh again. It had been a few years since I last baked the spiraled loaf that is supposed look like a potica, even though it tastes exactly like what it is: a savory multigrain yeast bread.
Slovenian cooking authority Janez Bogataj wrote the point was to "create an air of festive abundance" even during hard times, when the more costly ingredients that go into potica might be in short supply. (I have always suspected the recipe was a little bit of a culinary joke as well!)
I had plenty of white flour and cornmeal on hand. But I had just used up the last of the buckwheat flour. So I needed to find another way to create the dark layer that is supposed to resemble the traditional walnut filling in potica.
In the spirit of making do with whatever is at hand, I turned to the batch of cold-fermented artisan bread dough I had waiting in the fridge. I had already used part of it to make a nice loaf of the New England specialty called Anadama bread. The loaf was tasty and had a satisfying brown color, thanks to the generous use of molasses. 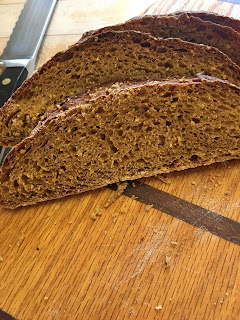 Anadama Bread
I realized it might be a little redundant to use the Anadama dough in pisani kruh, because it also includes some cornmeal. But my bigger concern was that the artisan bread approach (which involves bulk  cold fermentation) utilizes a wet, unkneaded dough that might be difficult to roll into a layer.
But it worked out just fine. I used some extra flour to roll out the sticky Anadama dough and then patted it onto the rectangle of white dough, before adding the final yellow corn layer and rolling it all up. 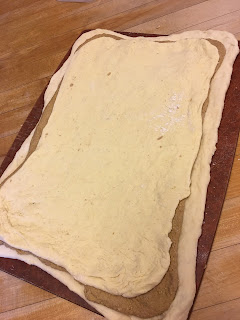 Pisani kruh, ready to roll up
There are several charming stories about the origins of Academa bread, an old-fashioned regional specialty from New England. Some sources suggest the roots are Native American. Others say it was the creation of a sea captain, who became impatient when his wife Anna served him nothing but cornmeal mush and molasses for breakfast. One day he grew so frustrated that he decided to mix in some yeast and white flour, muttering "Anna, damn her!" as he kneaded away at his new bread creation.
The recipe below is a very brief introduction to the "Artisan Bread in Five Minutes a Day" approach of Jeff Hertzberg and Zoë François. I will be writing more about this in a future post. 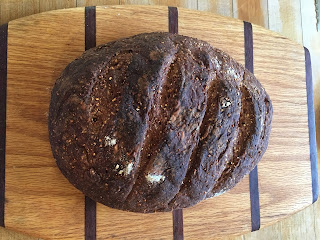 Anadama Bread
(Adapted from "Healthy Bread in Five Minutes a Day")
3/4 cup cornmeal
1-1/4 cups whole wheat flour
1-1/2 cup white (AP) flour
2 Tablespoons vital wheat gluten (or substitute extra white flour)
1 package instant dry yeast (2-1/2 teaspoons)
1-1/2 teaspoons salt
1-3/4 cups warm water (or less, if not using the "Artisan" approach; see below)
4 tablespoons molasses
Mix the dry ingredients together in a large bowl. Mix the warm water and molasses and stir into the flour mixture until well combined, using a spoon, your hands, or a stand mixer.
If using the artisan bread approach: This is a intended to be a wet dough that is never kneaded or punched down. It is allowed to rise, loosely covered, for 2 hours and then refrigerated (loosely covered) for up to a week. A portion of dough is removed as needed, gently shaped into a round, and baked at 450 degrees for about 30 minutes.  To get a crisp crust, the authors recommend placing the loaf on a hot baking stone and creating steam with a pan of hot water at the bottom of the oven.
If you want to use more conventional methods: Reduce the water so that the dough will be stiffer and can be lightly kneaded. Then follow the usual approach (let rise, shape,  rise, and bake.)
This quantity of dough will make two 1 pound loaves. Half this quantity will be sufficient to use as the dark layer in my pisani kruh recipe.
Posted by Blair K. at 7:59 AM No comments: