Buckwheat Cheesecake for the Fourth of July Pie Contest 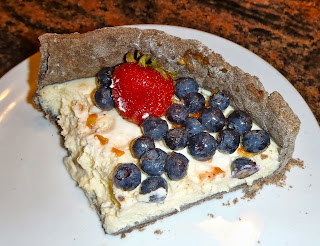 It was time for the annual neighborhood Fourth of July potluck.  For the second time, there would be a pie-baking contest.

Last year's entry, prekmurska gibanica, had been a success.  I came in third out of eight, a modest but respectable showing, especially since the fabled Slovenian dessert wasn't exactly a pie by American standards.  The elaborate layered "strudel pie" had aroused plenty of interest and it did taste wonderful.

For an encore, I had in mind another unusual dish that was not quite a pie.  Buckwheat cheesecake. I'd had my eye on the recipe for the past year and had been waiting for the right occasion.  It looked simple and it fit right in with my recent curd cheese/farmer cheese obsession.   And it was already salt-free.

The original recipe, called ajdova zlevanka, appears in The Food and Cooking of Slovenia (2008) by master chef Janez Bogataj.  (It is reprinted here, in a Milwaukee newspaper.)

I made just a few additions to the original recipe: sugar and ginger in the pastry crust and a grating of lemon rind in the filling.  The foundation of the dish was a Russian-style farmer cheese I can buy locally. Its wonderful tang probably comes from a "culturing" step that is omitted in  my simple homemade curd cheese.  In the spirit of the holiday, I devised a  red-white-and-blue fruit topping: blueberries and strawberries mixed with a simple glaze.

For the results (of the recipe and the competition) read on! 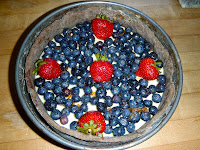 For topping:  Fresh fruit, plain or mixed with a simple glaze (see below)

Grease an 8 inch tart pan with a removable bottom or a springform pan.

For the crust:  Sift flours, sugar and ginger into bowl. Cut in butter.  Stir in egg yolk and enough water to bind the mixture. Blend lightly and form into a ball.  Wrap in plastic wrap and refrigerate for 20 minutes.

Roll out dough and line the pan.   Line pastry with parchment or foil and fill with rice or beans to blind-bake.  (I used whole buckwheat!)  Bake for 10 minutes at 375 degrees. Let cool.

For the filling: Mix cheese and sugar.  Add eggs, lemon rind, and two-thirds of the sour cream and beat together.  Sift flour over surface and fold in.

Pour filling into crust-lined pan.  Spread remaining sour cream over the top in a thin layer.

Bake for 40 minutes at 375 degrees until lightly set.  Let cool and top with fresh fruit or glaze before cutting. 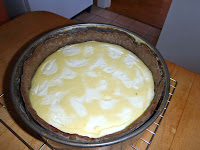 I baked the cheesecake in the late morning and set it out to cool.  I hadn't been successful in spreading that thick sour cream, so the top was covered with little white dabs.  And the buckwheat crust looked more rustic than elegant.  Not a beautiful dish.

No matter.  I would cover it with a simple fruit topping I improvised.

Wash and dry fresh strawberries and blueberries and set aside.  In a small saucepan, mix the preserves. Warm slowly over low heat until mixture melts.  Add lemon juice and kirsch to taste.  Gently mix fresh fruit with glaze and arrange on top of cheesecake.

Now my pie entry looked more than presentable.  On to the contest. 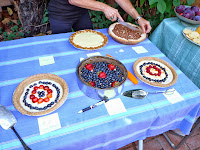 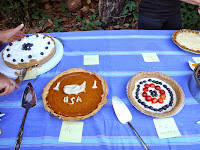 When I arrived at our neighbor's house,  I realized the competition would be stiff.  The field was a little larger this year.  And everyone else seemed to have gone creative with the toppings and decorations.  My red-white-and-blue brainstorm wasn't exactly unique.

But the proof would be in the eating. 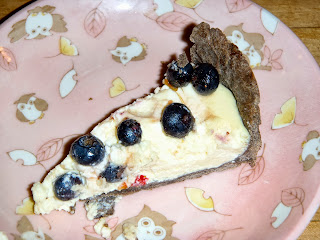 When I cut into that buckwheat cheesecake, my heart sank.  The filling was soft, especially in the middle.  Those thin slices looked more like pudding!  And the crust was hard to cut.

I bit in and was disappointed.  The buckwheat crust was tough and dry.  The filling was pleasant but bland.

I came in second-to-the-last in the pie ranking.  No prize for me this year. Of course, I had refrained from voting for myself this time. Not out of modesty but simply as an honest assessment. This dish was not a winner.

But guess what?  The next day, after thorough chilling, the filling had firmed up perfectly. And it tasted delicious, with the tart Russian-style farmer cheese and the touch of lemon.

The crust wasn't great.  My mistake, I think, was that I didn't pay enough attention to the "scant" part of the directions. Because the dough had been too dry at first, I had added more water and probably overworked the pastry.

Next time, I will probably use just 3/4 cup of each flour for a more tender crust.  On top, I might use more sour cream and thin it with a little milk for ease of spreading.

The original recipe indicates that the cheesecake can be served warm.  But I still recommend thorough chilling, to bring out the flavor of the filling.

There is also a savory alternative, with salt and pepper rather than sugar in the filling. Interesting, but probably tough to do without the salt.   I'll probably concentrate on perfecting this unusual and promising dessert version.

Update from November 2014: The savory version, with a much-improved crust, was a success! 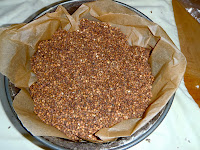