New Twists on Old Favorites: Jota with Sweet Potatoes and Balkan Cornbread with a Lift! 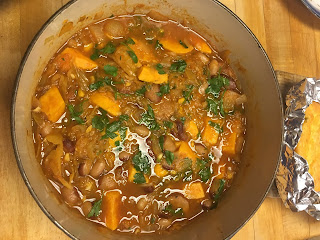 Where has the time gone?

My last post was a Christmas greeting back in December: The familiar gnome with a plate of potica and medenjaki. I had made those tasty spice cookies a little differently this year and had planned to follow up with the recipe. And now it is almost April. Funny how the same thing happened last year, right after our first pandemic Christmas, when I seemed to run out of blogging steam for three months.

No excuses, except to say that living and cooking through a pandemic is a new experience for all of us.

Now I have some catching up to do!

So here is a tasty dinner I made in early January. Two dependable favorites with a few new twists that worked out well.

Jota, Slovenia's traditional bean-and-sauerkraut stew, has become one of our favorite comfort foods, especially after I arrived at my new and improved version. We had almost everything on hand--including some garlic sausage (made with chicken, our preference) and homemade sauerkraut, courtesy of my husband. We were missing just one ingredient: Potatoes. Unless you count sweet potatoes. Which I did.

My husband had his doubts, but those sweet potatoes turned out to be more than just a good substitute. They added a touch of sweetness and color that provided a whole new dimension to the dish. 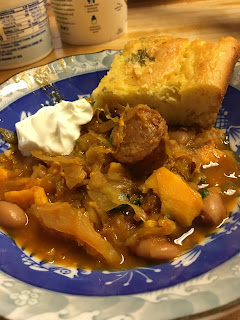 I figured my Never- Fail Balkan Cornbread would make a nice accompaniment. It is normally made without leavening, but I wanted to try an intriguing Christmas gift one of our kids had sent: a can of Magic Baking Powder (yes, that is the name!), made in Canada and aluminum-free. I figured a teaspoon couldn't hurt. And why not add a half teaspoon of sweet paprika? We were a little low on yogurt, so I had to stretch it with some milk, which resulted in a looser batter than usual.
I'll admit it:  I was a little worried about that cornbread. But it turned out to be the lightest and moistest version yet! 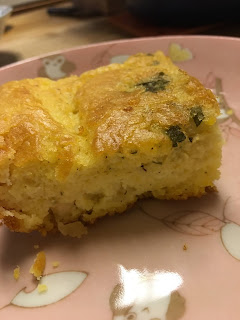