My Year of Cooking Ethnically: How It Began 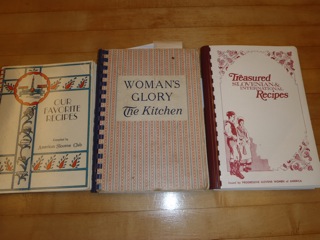 It began in December of 2010, when I was doing some online holiday shopping and came across a classic mid-century ethnic cookbook called Woman's Glory: The Kitchen.  I decided to order it as a pre-Christmas gift for myself.

Woman's Glory was published in the early 1950's in Chicago, by the Slovenian Women's Union of America.  My well-used 1958 edition turned out to be an odd but charming mix of traditional Slovenian recipes, interspersed with dated American gems like jello molds, Texas Taters, and casseroles made with canned soup.  An amusing curiosity, I thought, and nothing more.  I stored it on a bookshelf.

The following December, I decided to add two more vintage cookbooks to my collection. They were both products of the Slovenian community in Cleveland, my hometown. Our Favorite Recipes was published by the American Slovene Club in 1946, with multiple revisions and printings over the next decade. The Progressive Slovene Women of America issued Treasured Slovenian & International Recipes in the early 1950s.

I had been consumed with genealogy research for the past two years, and I had begun to feel a little bogged down with grim family histories and distant DNA cousins.  But that trio of vintage cookbooks suggested a new direction for my roots quest.

Maybe I could arrive at a deeper understanding of the Slovenian American experience—or at least my own family—if I tried to cook like my foremothers.

In January of 2012, I made a New Year's resolution.  For the next year, I would commit to making one all-Slovenian dinner a week.  I would try to stick as closely as possible to recipes in those three cookbooks.

It would be my own ethnic version of Julie and Julia: My Year of Cooking Dangerously.  I had enjoyed reading that wildly successful memoir by Julie Powell, who set out to cook every recipe in Mastering the Art of French Cooking.

But there were some major differences between us.  Powell wanted to invoke the spirit of the famed chef Julia Child, who lived a life of glamour and privilege, and who introduced the American public to French haute cuisine.

My goal was different.  I wanted to invoke the spirit of people like my grandmother Mary, a wonderful cook who never used recipes. And her mother. And all those other women, unsung and decidedly non-glamorous, who lived and cooked and struggled in America's working class and ethnic communities in the early part of the twentieth century.

I had warm memories of watching my grandmother roll out potica and strudel and noodles in the kitchen of her little bungalow on Cleveland's East Side.  But there had to be more to Slovenian food than that.  I hoped so, at least.

Julie Powell dubbed her venture the Julie/Julia Project. Perhaps I should call mine the Jožefa/Josephine Project.  That was the first name, in Slovenian and in English, of my immigrant great-grandmother, who arrived in America in 1899.  She was a simple woman.  A peasant girl who never did learn to speak English.  I never knew her.

Maybe now I would.