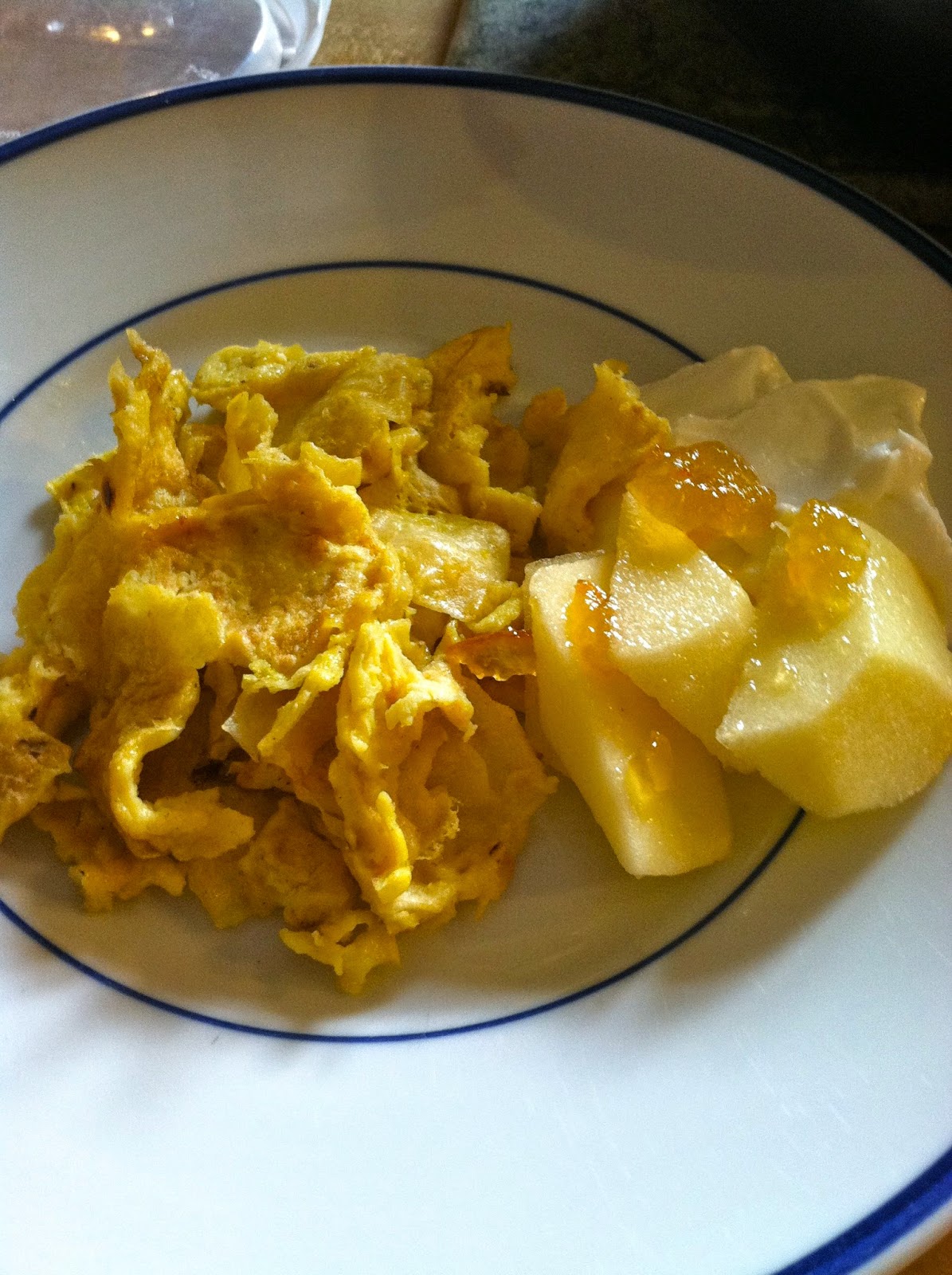 There wasn't much left in the package of  Ljubljana Farmers' Market mlinci we brought back from our July trip to Slovenia. Just a few sheets and crumbles. I had the perfect solution. Matzo brei for our weekend breakfast, with the Slovenian dried flatbread substituted for Jewish matzo.

Matzo brei is Jewish comfort food. It is traditional at Passover, but in many families it is a year-round favorite. The dish is simple: pieces of matzo are soaked in beaten egg and browned in oil or butter. It is often referred to as fried or scrambled matzo, which sounds more elegant than "mash" or "pulp," the literal translation of the German word "brei."

My husband pointed out that my timing was perfect, since that package of mlinci had just passed the expiration date! 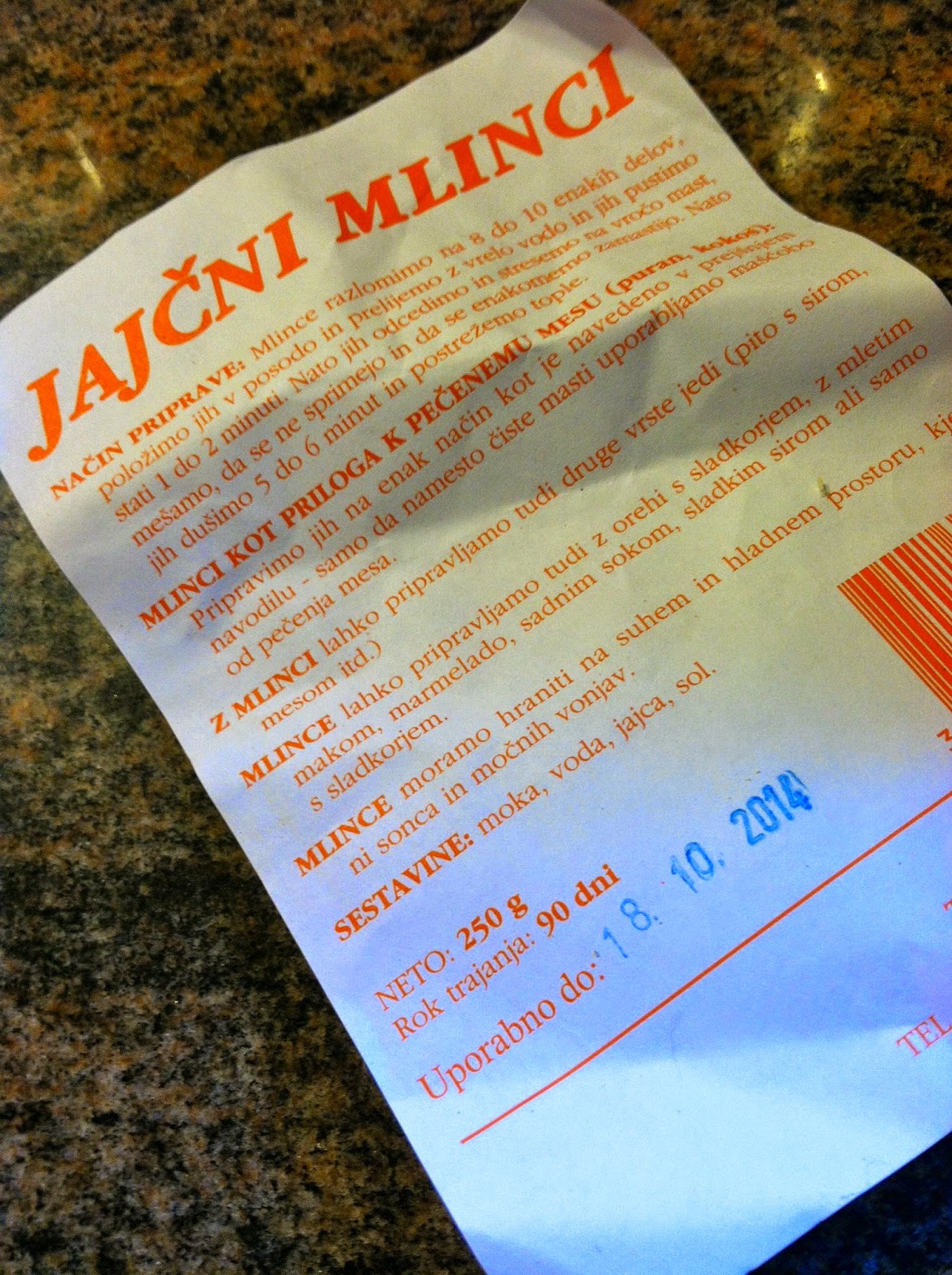 In most matzo brei recipes, the matzo is softened in warm water before it is mixed with beaten eggs. But I skipped that step, because these Ljubljana mlinci were so thin. I just broke up the crispy sheets and added them to the beaten eggs. I skipped the salt but added a little cinnamon, a suggestion I found in one of my Jewish cookbooks, and scrambled the mixture up in melted butter. 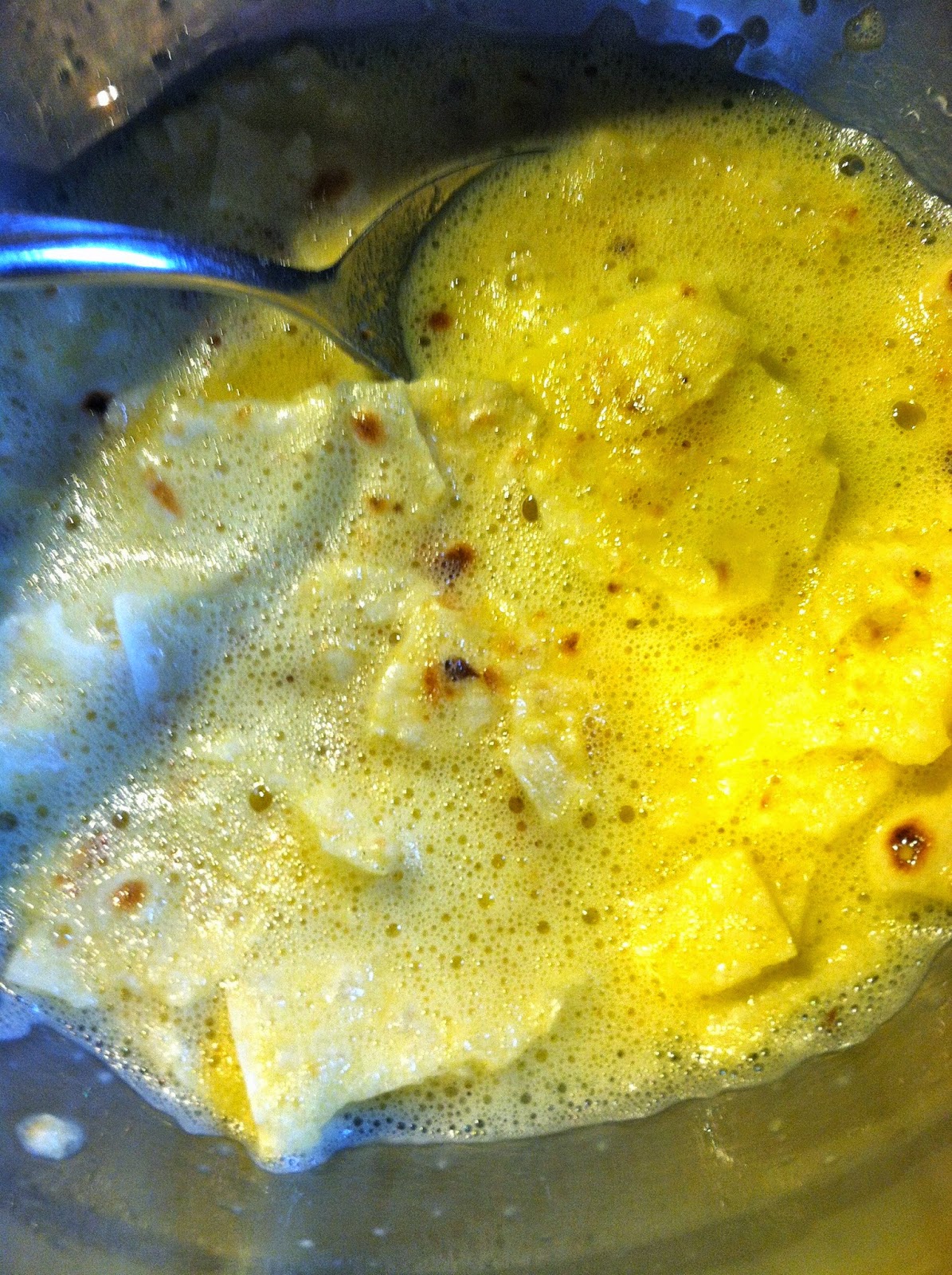 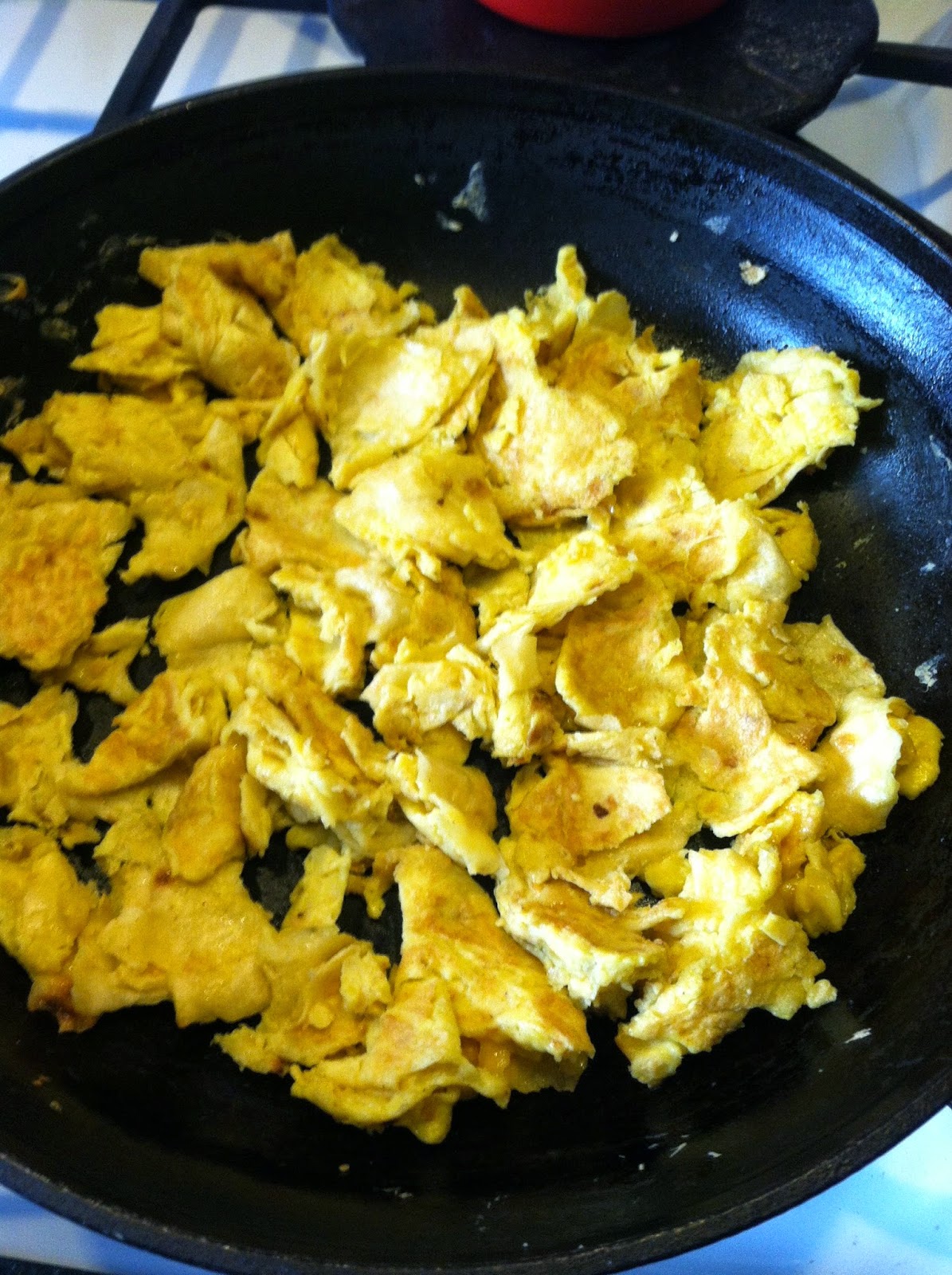 4 eggs, beaten
2-4 sheets of mlinci, crumbled
cinnamon (or salt and pepper)
butter or oil for frying

Beat eggs with seasonings. Add crumbled mlinci. (If necessary, mlinci can be softened briefly in warm water and drained before adding.) Let mlinci soak in egg mixture for a few minutes. Heat butter or oil in skillet and add mixture.  Can be scrambled or cooked in larger chunks and turned. 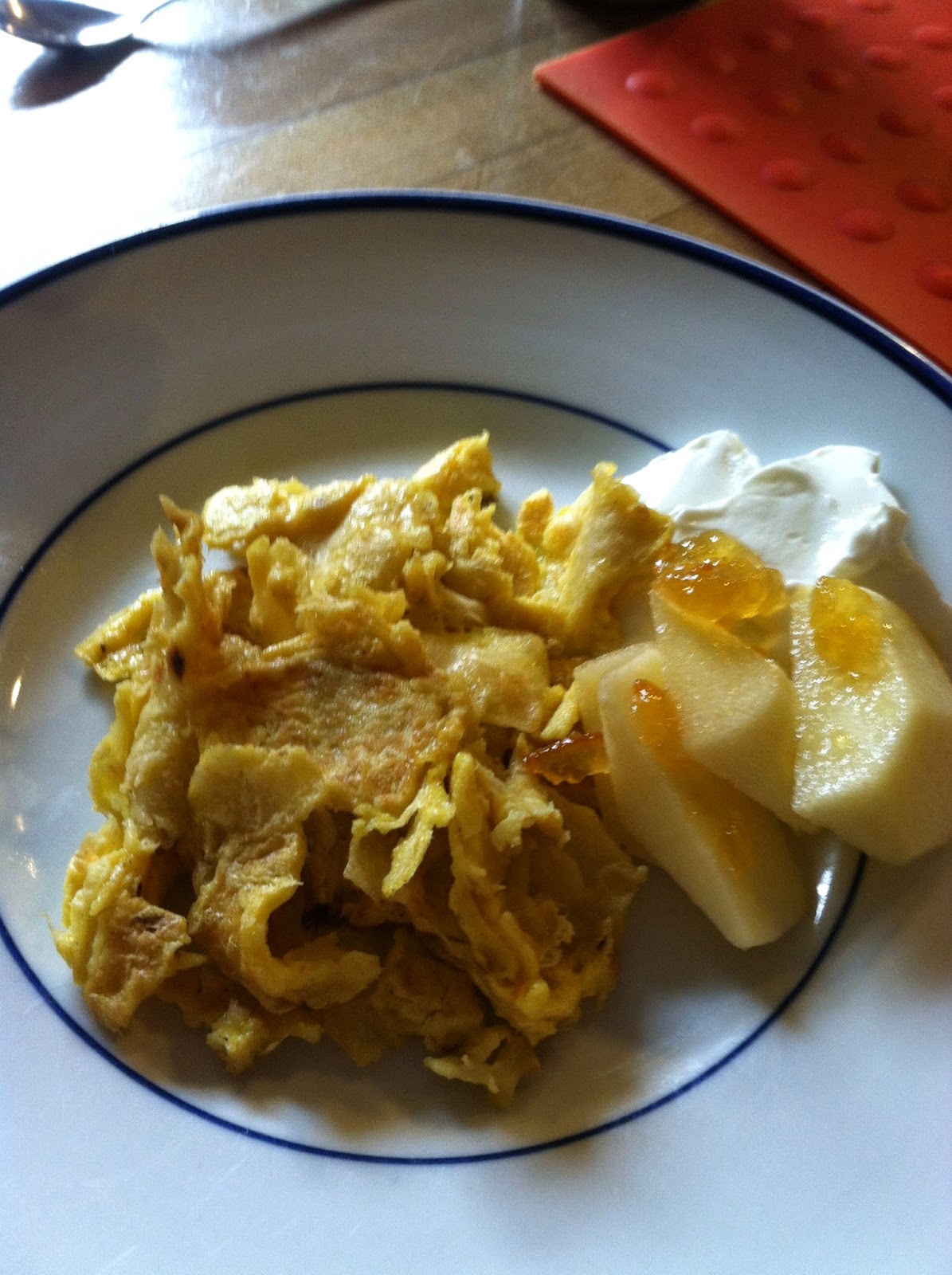 The result? Slovenian-Jewish fusion at its best. Matzo brei can be either savory or sweet. I took the sweet route and served the mlinci brei with Greek yogurt, fresh apples, and orange marmalade on the side.  Delicious!

Now I have a new challenge: To tweak my recipe for homemade mlinci, so it comes closer to the real thing!

Buckwheat Cake with Syrup (and a dash of Yugo-nostalgia) 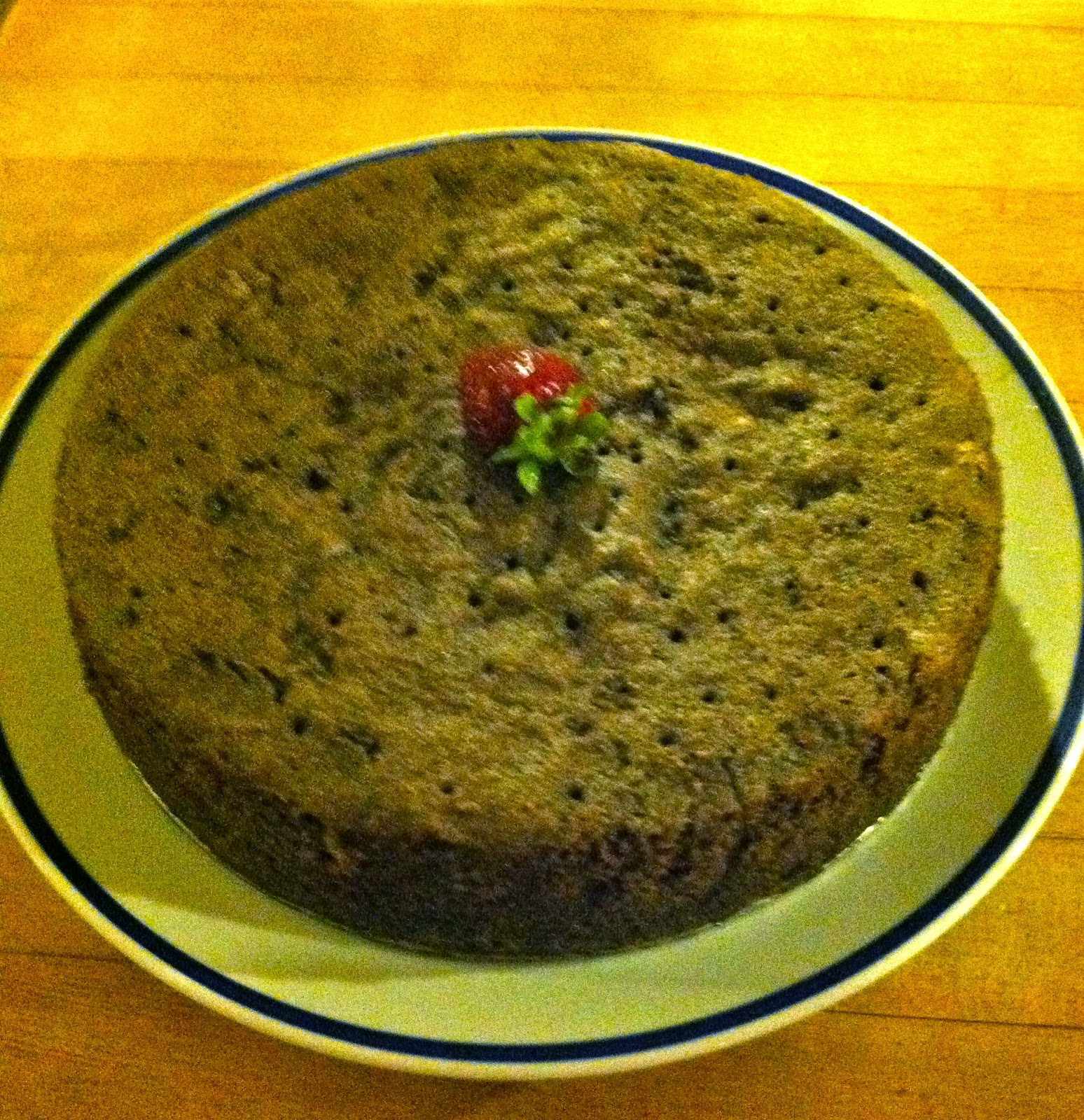 This unusual buckwheat cake was the first new Slovenian recipe I tried after we returned from our July trip to Europe.

Months earlier, I had spotted the recipe in my cookbook collection. At the time, I dismissed it as a curiosity, but  now it looked more appealing. I felt nostalgic for the foods we had enjoyed during our recent travels and this recipe brought together two recurring and distinctive culinary threads: Buckwheat, a particular favorite in Slovenia, and syrup-soaked pastries and desserts, found throughout southeast Europe, but particularly in the Ottoman-influenced cuisines of Kosovo and Albania.

The source of the recipe is a fitting one: The Yugoslav Cookbook, a dated volume I discovered in the library of San Francisco's Slovenian Hall. It was published in 1986 by a Slovenian publishing house in Ljubljana, during the waning days of the Socialist Federal Republic of Yugoslavia. Five years later, Slovenia would declare its independence, and the bloody unraveling of Yugoslavia began.

The book's author, Olga Novak-Markovič, explained her plan in the introduction: to feature typical dishes from all the republics and regions of Yugoslavia. But she wanted to present a portrait of a national cuisine, so she classified the dishes by type, rather than by ethnic origin. Her cookbook may have been a final homage to a multicultural vision of Yugoslavia that worked better in the kitchen than anywhere else.

For my adaptation of the recipe, read on. 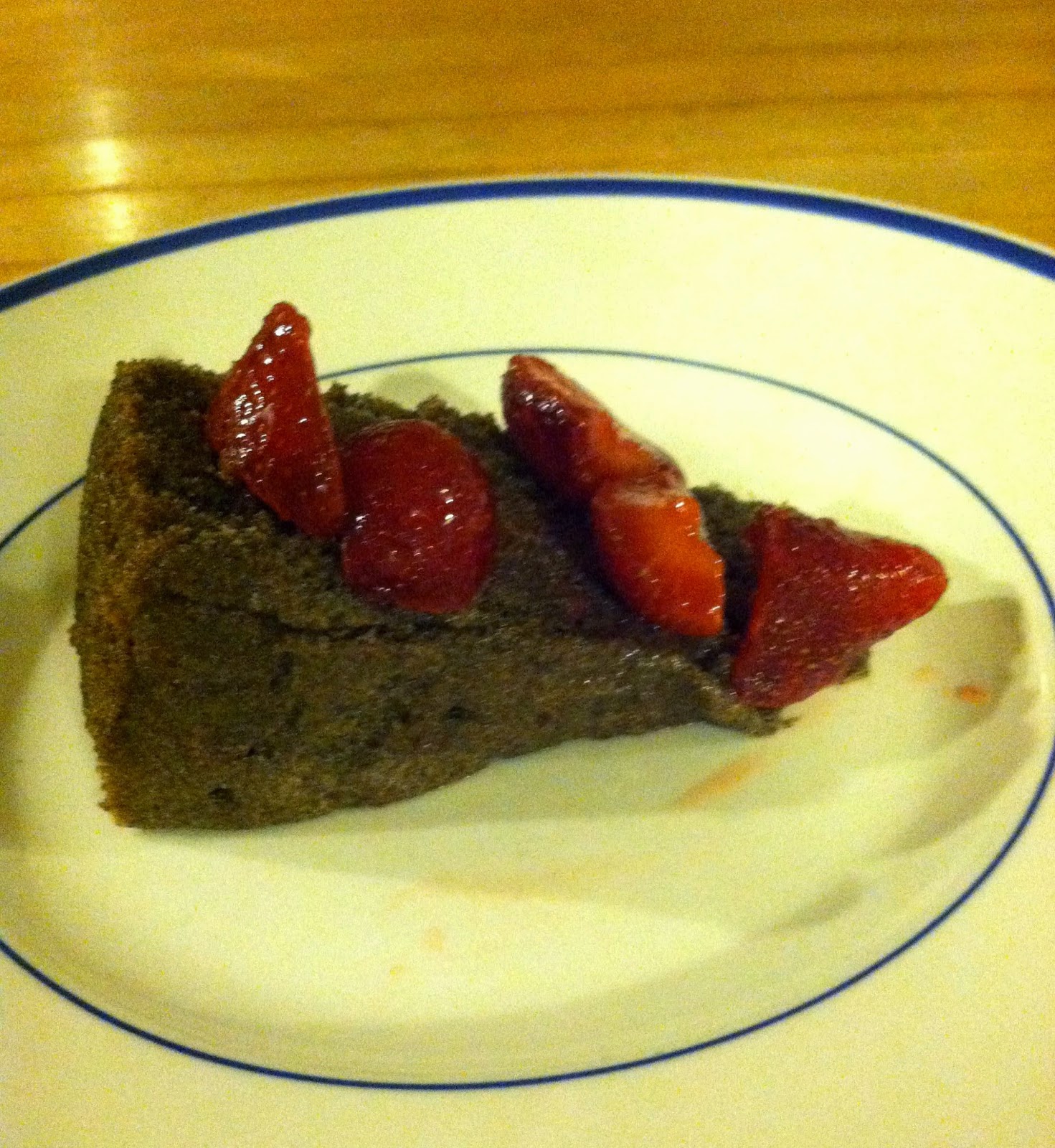 Buckwheat Cake with Wine Syrup (adapted from The Yugoslav Cookbook)

Mix syrup ingredients together and boil for several minutes. Although the original recipe doesn't call for it, I pierced the top of the cooled cake with the tines of a fork before slowly pouring the warm syrup over the top. Let cake cool to room temperature. Cut into thin slices and serve with fresh fruit if desired.

The result?  A rich, dense cake with a definite buckwheat flavor, balanced by the sweetness of the spiced wine syrup. (For a milder taste, just substitute white flour for part of the buckwheat.) This unusual dessert will appeal to serious buckwheat lovers. It also happens to be low-fat, low-sodium, and gluten-free.

Did this cake originate in Slovenia? Ms. Novak-Markovič doesn't say. But I believe it did. I have found a similar syrup-soaked cake, made with wholemeal flour, polenta, and walnuts, in a cookbook by the contemporary Slovenian cooking expert Janez Bogataj. There is also a recipe for a frosted buckwheat torte in one of my vintage Slovenian American cookbooks.  One thing is certain: this is an intriguing sweet from somewhere in the former Yugoslavia, and that is good enough for me! 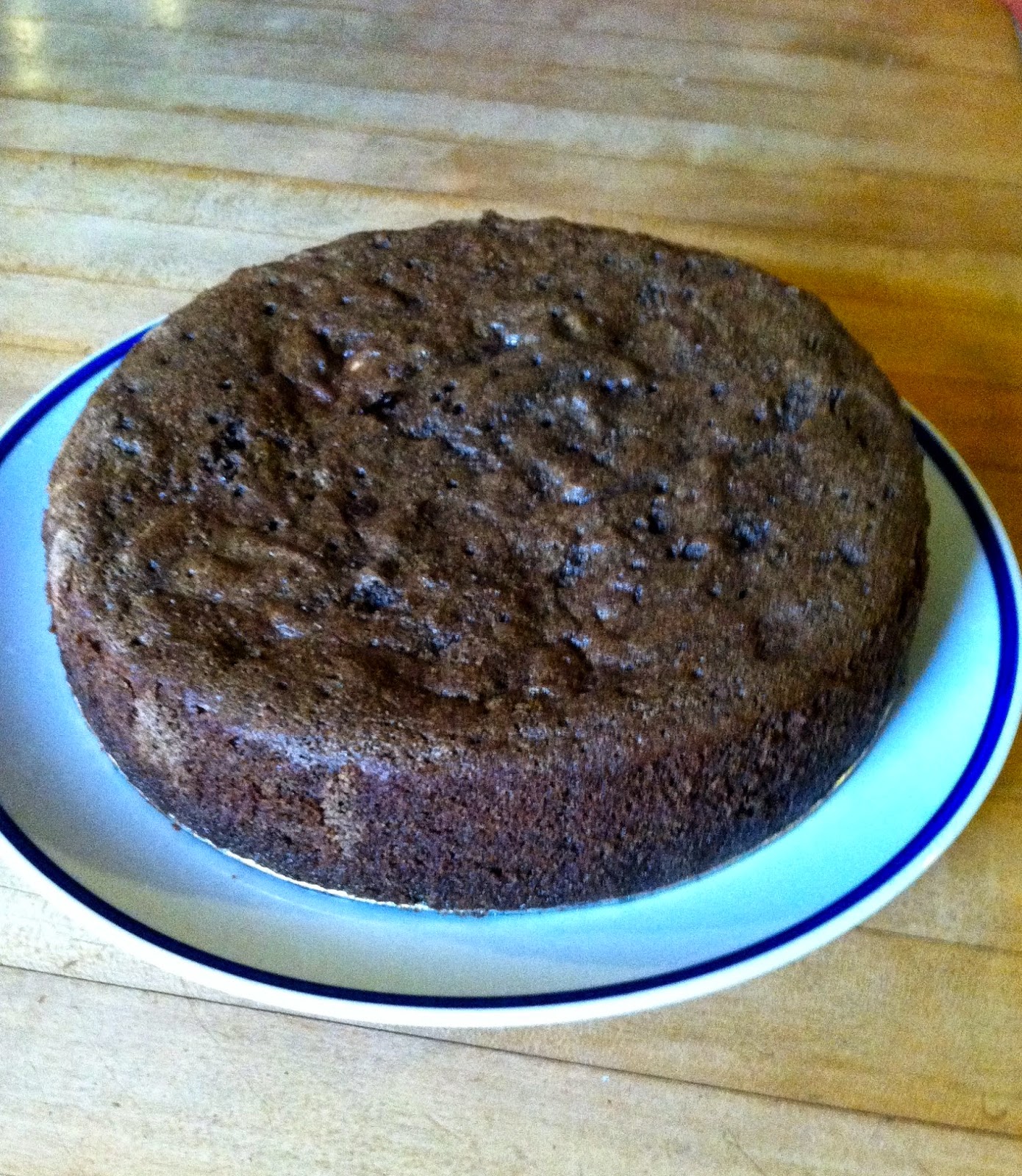