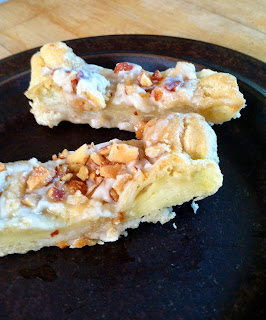 I wish I could claim that Danish Puff, a homey but elegant childhood favorite, has Slovenian roots. But perhaps it is enough to say that it was inspired by memories of my mother.

This is another recipe that turned up in the green metal recipe box my mother passed along to me about six months ago. Even though I had a copy in my own card file, I hadn't thought about it in years. I had never considered resurrecting it. Concoctions like Danish Puff belonged in the category of laughable culinary faux-elegance from the 1950s, or so I thought. At best, it was nostalgic comfort food. 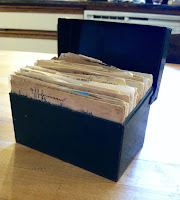 But back in the I fall, I was feeling nostalgic--and in need of some comfort. My mother's health was declining and we were helping her downsize and move into a smaller place, where she would receive more help. The upcoming elections didn't help. So I made Danish Puff for the first time in at least thirty years. I even shared some with my mother--on moving day. She seemed to enjoy it.

Setting aside my culinary snobbery, I was forced to admit the truth: Danish Puff is a simple pastry that tastes wonderful. Perhaps it no longer seems quite so exotic and vaguely European, but it is well worth making.

Perhaps you remember it from your own childhood.

It is a simple but elegant affair. Two contrasting pastry layers, the bottom one a standard shortcrust pastry and the top one a cream puff dough. Or, to be fancy and French, paté brisée topped by paté choux. Shaped into long double decker loaves, baked and sliced. The only sweetness comes from the drizzle of confectioners' sugar icing, topped by almonds. The haunting flavor of almond runs through every mouthful.

The source of my mother's handwritten recipe is hard to determine. In fact, the card I discovered in her file was a hybrid--a yellowing card in two sets of handwriting, hers and mine: 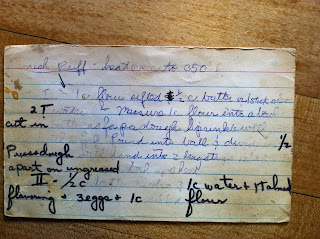 There are virtually identical recipes for Danish Puff in two of my vintage Slovenian American cookbooks--including my favorite one (from both the culinary and political standpoint), compiled by the Progressive Slovene Women of America. Their version is just like my mother's, with the no-frills icing that is nothing more than confectioners' sugar mixed with a little water or milk, plus a touch of almond extract: 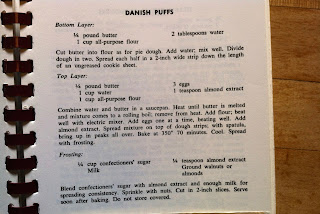 But that doesn't make a strong case for its Slovenian origins, since the same recipe can be found in so many other places. Including the blogosphere, where it seems to have enjoyed a resurgence in popularity. Everyone's mother or grandmother seems to have made it. Many sources attribute the recipe to a Betty Crocker cookbook from the 1960s (but I know it is older than that) or perhaps the 1950s.

I am more inclined to trust the opinion of Beatrice Ojakangas, a noted cooking authority (and prolific cookbook author) from Minnesota, whose own background is Finnish. She includes a recipe for Danish Puff in Great Old-Fashioned American Desserts (U. Press of Minnesota, 2004). She describes it as a traditional coffee-and-dessert favorite of Scandinavian Americans, although, as she drily notes, it is "unknown in Denmark." 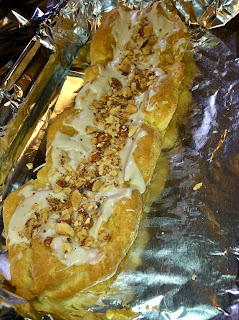 The recipe follows below. It is so similar to all the other recipes for Danish Puff (except for a few non-almond variations) that I do wonder whether there might have been a single source. Perhaps it first made the rounds when it was printed on bags of General Mills flour.

But why worry about the source? Try it and enjoy it for yourself! 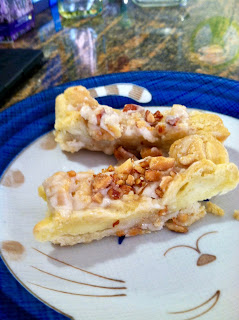 confectioners' sugar, 1/2 to 1 cup
a little water or milk to thin
almond extract to taste
chopped or slivered almonds

Note: Some recipes suggest vanilla extract and walnuts as alternatives. But that's not how my mother made it--and I believe it changes the character of the pastry.


Bottom Layer: Cut butter into flour as for pie crust. Sprinkle with water and mix lightly. Form into a ball and divide in two. Pat each half into a 3 x 12 inch strip on an ungreased baking sheet.

Top Layer: Combine butter and water in a saucepan and bring to a boil. Remove from heat. Add flour and mix in quickly to keep mixture from clumping. (Some recipes suggest cooking the mixture briefly over the heat.) Add eggs one at a time and beat well after each addition. Add flavoring and beat until smooth. Divide mixture in half and spread on each pastry strip.

Bake at 350 degrees F for 45 to 60 minutes or until lightly browned. Let cool. Frost with a simple confectioners' sugar icing. Sprinkle with nuts. Slice and serve. Tastes best shortly after baking. If there is any left over, refrigerate uncovered.