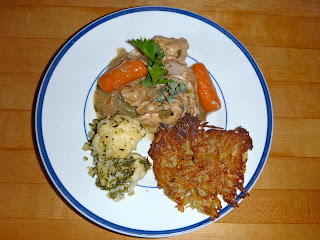 It was the third week of December.  Right between Hanukkah and Christmas.  My thoughts drifted back to a dish I had made in January, at the very beginning of my year of ethnic cooking.

Slovenian Dinner Week 3 had been quite an adventure.  I had attempted two traditional dishes that were completely new to me. Žganci, a giant boiled buckwheat dumpling, didn't quite work out. But the main dish, a tangy stew called chicken ajmoht, had been a success.

Chicken ajmoht, sometimes called obara, is a simple stew or ragout. Its special tang comes from a dark roux, something that my mother recalled from her childhood.  For my first attempt, I had used a simple recipe from the Progressive Slovene Women of America.  This time, I wanted to add some additional vegetables and seasonings.

For inspiration, I consulted a couple of traditional sources.  The Food and Cooking of Eastern Europe had an obara recipe with a few more vegetable choices.  Slovenian Cookery included a recipe for chicken stew with cviček, a unique Slovenian red wine.

So I added a few new touches to my earlier recipe:  Carrots and leeks. Lemon peel and red wine.  For quicker cooking, I used boneless, skinless, chicken breasts. 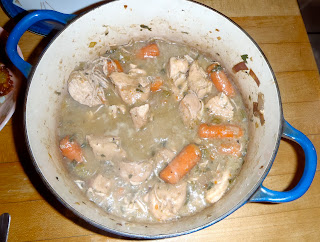 Heat oil in a Dutch oven. Add onion, celery and leeks.  Brown vegetables.  Add carrots, chicken, and seasonings and continue to brown.  Add water to cover and simmer, covered, for 30 minutes or until tender.  In a separate pan, make a roux, cooked to medium brown.  Add to the pot and stir well.  Add remaining water and red wine and adjust seasonings.  Simmer about 15 minutes more.  Sprinkle with additional parsley.  To be traditional, serve with noodles, polenta, or (of you are feeling bold!) buckwheat žganci. 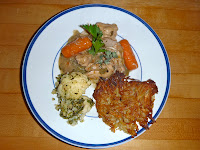 The verdict? Even better, the second time around!  And chicken ajmoht goes perfectly with my husband's special latkes, a traditional Jewish favorite, especially during Hanukkah.

Just one thing would have improved the dish: some genuine Slovenian cviček!

Actually, one member of our family did get the chance to try cviček.  Right at the source. And we think the winemaker might have been a distant cousin!

Go here to read an article by our journalist son, who paid a visit last year to the Kozlevčar Winery in Slovenia. 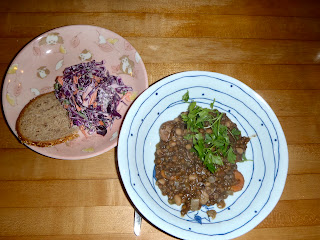 It was the second Tuesday in December.  I was in the mood for soup.

Should I continue with my string of makeovers?  The soups I had prepared earlier in the year didn't seem to need much tweaking.  So I decided to try something new.  But what? I had covered most of the traditional Slovenian favorites.

Finally, I had it.  Lentil soup.

The Progressive Slovene Women had a recipe for lentil soup.  A little checking online reassured me that this was indeed a traditional Slovenian dish called lečina juha. The soup looked easy, even when I incorporated a few additions from an Internet source.

Simple and straightforward seemed like an especially good idea, right about now. I had barely started my holiday baking, so that would have to be the focus of my cooking energy for the next few weeks.

I even took a few shortcuts with the soup recipe: canned beans and no pre-soaking with the lentils. 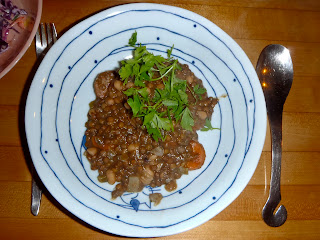 Brown onion and garlic in olive oil and set aside.  Bring water to boil in large soup pot or Dutch oven. Add lentils, browned onion and garlic, and remaining ingredients.  Simmer 1-2 hours, adding more water if soup becomes too thick.  Taste and adjust seasonings. Before serving, add a sprinkle of parsley on top. 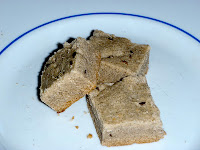 The verdict: Just as I had hoped, the lentil soup was hearty and delicious.  And very thick.  The sweet, mild flavor of the chicken-apple sausage, though not the traditional choice, worked well.  Obviously, any number of meat choices (sausage, bacon, ham) could be used instead.

We enjoyed the soup with a couple of traditional accompaniments, coleslaw and rye bread.  And a not-so-traditional dessert:  caraway-buckwheat shortbread, a holiday baking experiment I had taken to a dinner party over the weekend. Nothing like a little Scottish-Slovenian fusion!