When it came time to make this year's Christmas potica, I returned to my tried-and-true family recipe.  Along with our traditional walnut-honey filling, I decided to use the new almond filling I'd discovered in a Slovenian cookbook, while I was creating my first gluten-free potica, a week earlier. This would also be a good time to figure out the metric conversions for the almond filling, which I've included in the updated directions below.

Along the way, I had a few new realizations about the old family recipe. Here they are: 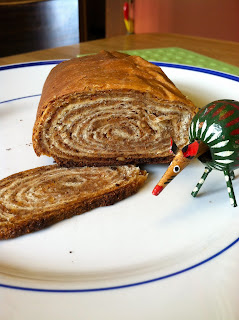 1. The dough needs a full eight hours in the refrigerator, even if the rise is minimal.

I was pressed for time this year and decided to make the potica in a single day. An early morning rise of three or four hours should be fine, I thought. Well, not really. The potica rose less and the bread/pastry layers seemed a little denser than usual. No one complained (not even my mother) so perhaps I was the only one who noticed. Our potica is so dense and rich that it might not make much of a difference. But I won't skimp on the rising time again.

2. Grinding the nuts really does makes a better filling.

To save time, I skipped the old-fashioned hand grinder I bought a couple of years ago and returned to the food processor. As you can tell from the photos above, there were some rather large pieces of nuts in the filling. Yes, it still tasted good, but it's even better when the nuts are ground or at least chopped finely. Next year, I'll return to my antique hand grinder!

3. Don't worry if a loaf splits during baking.

The occasional crack is inevitable with free-form loaves, especially when you use a generous hand with the honey. But it's just a cosmetic problem. The potica still tastes wonderful. 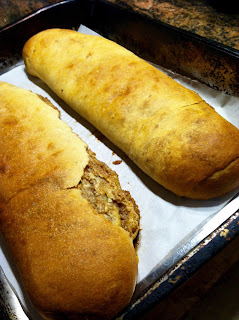 4. My family's rich walnut-honey filling was probably born of frugality.

I have always considered my family's layered filling to have a lush, elegant simplicity. Melted butter, walnuts with sugar and cinnamon, and a final lacing of honey: it reminds me of baklava. Most recipes for nut fillings are quite different. For one thing, many don't use honey at all. And they mix in all sorts of additional ingredients: milk or cream, eggs, sometimes raisins, or even bread crumbs. I have always dismissed these extras as "fillers," designed to stretch the precious nuts and honey. My family's recipe might be a little extravagant, but potica was a special holiday treat, so why not? 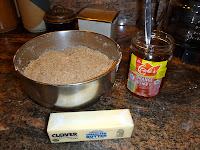 But I had it all wrong. Take a look at the two filling recipes below. Each one uses a pound of nuts, which should be enough for two loaves, or half the dough in my family recipe. That tasty new almond filling uses sugar rather than honey, and it includes egg whites, cream and cookie crumbs. That should make more filling than than the simple walnut version, right?

But it was the other way around. I discovered that the thick, delicious almond filling was hard to spread. I had to drop it in clumps onto the dough and then flatten it out. By the time I got to the second almond loaf, there was barely enough left to fill it. So this was definitely not an economical choice. 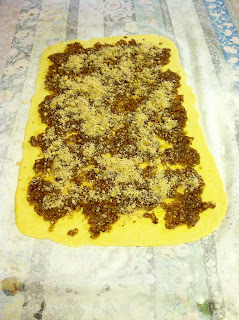 My family's walnut-honey recipe, on the other hand, could easily cover the dough, no matter what its size It adapts to whatever thickness--and surface area--the cook creates when she rolls out the dough. When I look back at photos of my potica efforts from earlier years, I can see it clearly. I used to roll a thicker dough, and there was an equally thick layer of filling. In fact, I often had some of the walnut-sugar mix left over. As I have moved toward thinner layers of dough, the layer of filling follows suit.

That, I have discovered, is the magic of this simple, layered honey-nut filling. It is practical, easily adjusted, and, in its own way, frugal. Butter and honey might be expensive for Americans, but those two ingredients were relatively accessible to the largely rural Slovenian population of years past, and they could easily be distributed over the dough in whatever quantity might be needed. The more costly layer, the ground walnuts and white sugar, could be sprinkled on thinly, and even supplemented with a layer of bread or cookie crumbs. 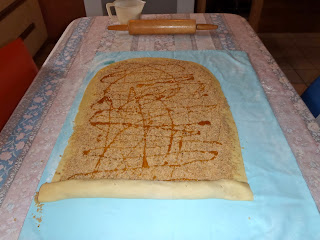 I recently discovered a touching video (by a film student named Bryce O'Boyle) in which a Slovenian American man shows his grandchildren how to make potica. I was surprised and pleased to see that his approach to filling was much like my family's, although in a slightly different order: first, a layer of brown sugar, followed by ground nuts, then a drizzle of honey, and little dabs of butter.

Guess what the film is called?  Poor Man's Potica.

So perhaps that's what my family has been making all these years! 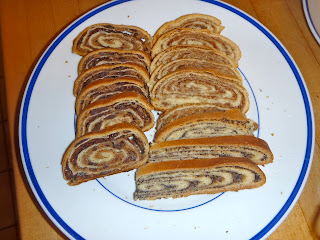 A note on quantities:  Each of the recipes below make enough filling for two loaves, or one-half of my family recipe. (The almond filling might be a little scant :-) Just double the quantities, if you prefer to make one filling for the entire batch.

Combine almonds and sugar in bowl. Pour in the warm cream and stir to combine. Add the egg whites, vanilla, lemon rind, and liqueur and stir well. Filling will be thick. Drop onto the rolled-out dough and spread out as well as you can. Sprinkle cookie crumbs on top. Roll up from the narrow end.