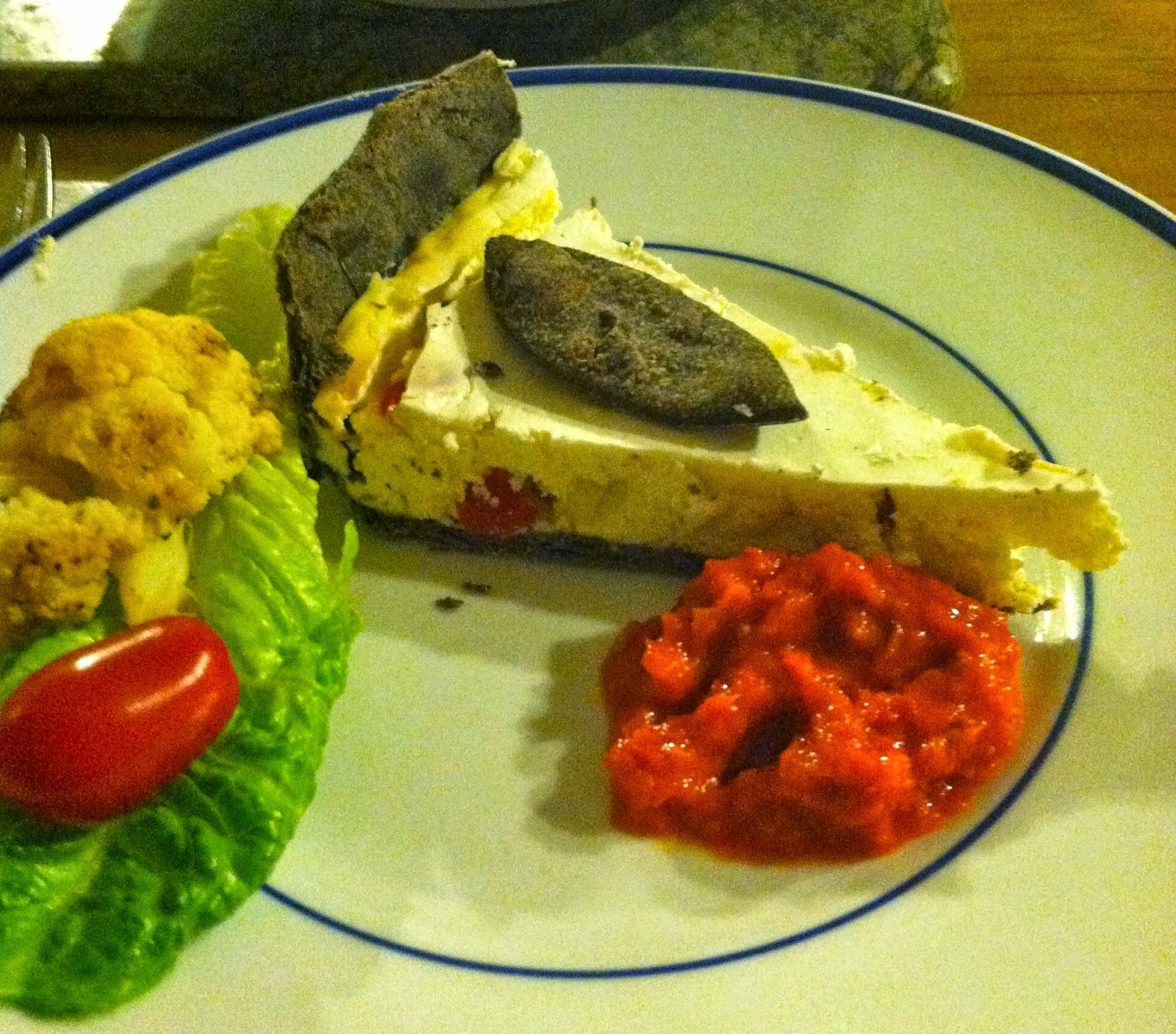 This unusual savory cheesecake was adapted from a dessert recipe called ajdova zlevanka, from Janez Bogataj's The Food and Cooking of Slovenia.

I had made the original sweet version of buckwheat cheesecake last year, for our neighborhood Fourth of July pie-baking contest. (For the details, go here.) The sweet cheesecake was not the winner I had hoped for. The filling, with my favorite tangy Russian farmer cheese as the foundation, was tasty enough, once it firmed up the next day. But that crust was tough and a little dry, probably because I had used too much flour. I resolved to make it again, paying more attention to the metric conversions for the crust. Perhaps I would try the intriguing savory variation mentioned in the cookbook, with an unsweetened filling that was seasoned with nothing more than salt and pepper.

This year, I finally tackled the savory cheesecake. Twice. I couldn't resist adding a few vegetables to the bare-bones filling. The first time, I made a simpler and slightly healthier at-home dish, with an oil-based press-in crust and yogurt instead of sour cream in the filling.  This fall, I wanted to make a fancier dish to take to a party. So I stuck closely to the original rolled butter pastry, went back to sour cream in the filling, and added a few decorative cut-out shapes on top.

For the recipe and results, read on. 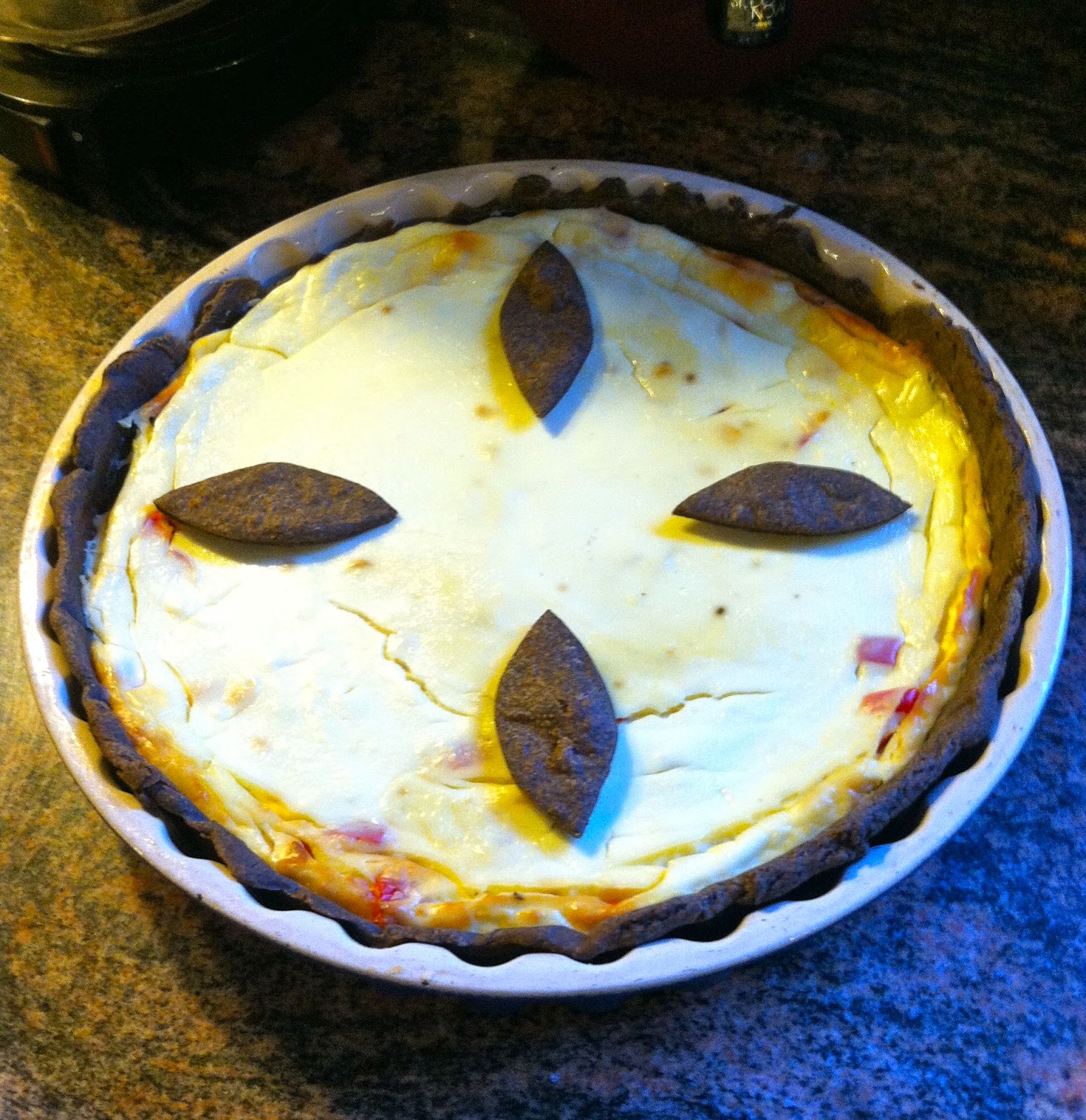 
For the crust:  Sift flours into a bowl. Cut in butter. Stir in egg yolk and enough water to bind the mixture. Blend lightly and form into a ball. Wrap in plastic wrap and refrigerate for 20 minutes.

Roll out dough and line an 8-inch tart or quiche pan. Line pastry with parchment or foil and fill with rice, beans (or whole buckwheat!) to blind-bake. To make it extra-fancy, use the leftover pastry to cut into little leaf shapes. Bake the crust for 10 minutes at 375 degrees and let cool.  (Bake the little leaves separately, on a baking sheet, for 5-10 minutes.)

(For a quick crust: Use 1/3 cup of oil instead of butter, mix very lightly with a fork, and press into the pan. Skip the blind baking.)

For filling: Brown onions, red pepper, and garlic in a little olive oil. Set aside and let cool slightly. Mix farmer cheese and seasonings. Beat in eggs and sour cream or yogurt. Stir in browned vegetables. Sprinkle flour on top and fold in. Spread filling in pastry-lined pan. If desired, spread a thin layer of sour cream on top. If using the decorative pastry leaves, arrange on top. Bake at 375 degrees for about 40 minutes, until lightly set. Let cool to room temperature before slicing. 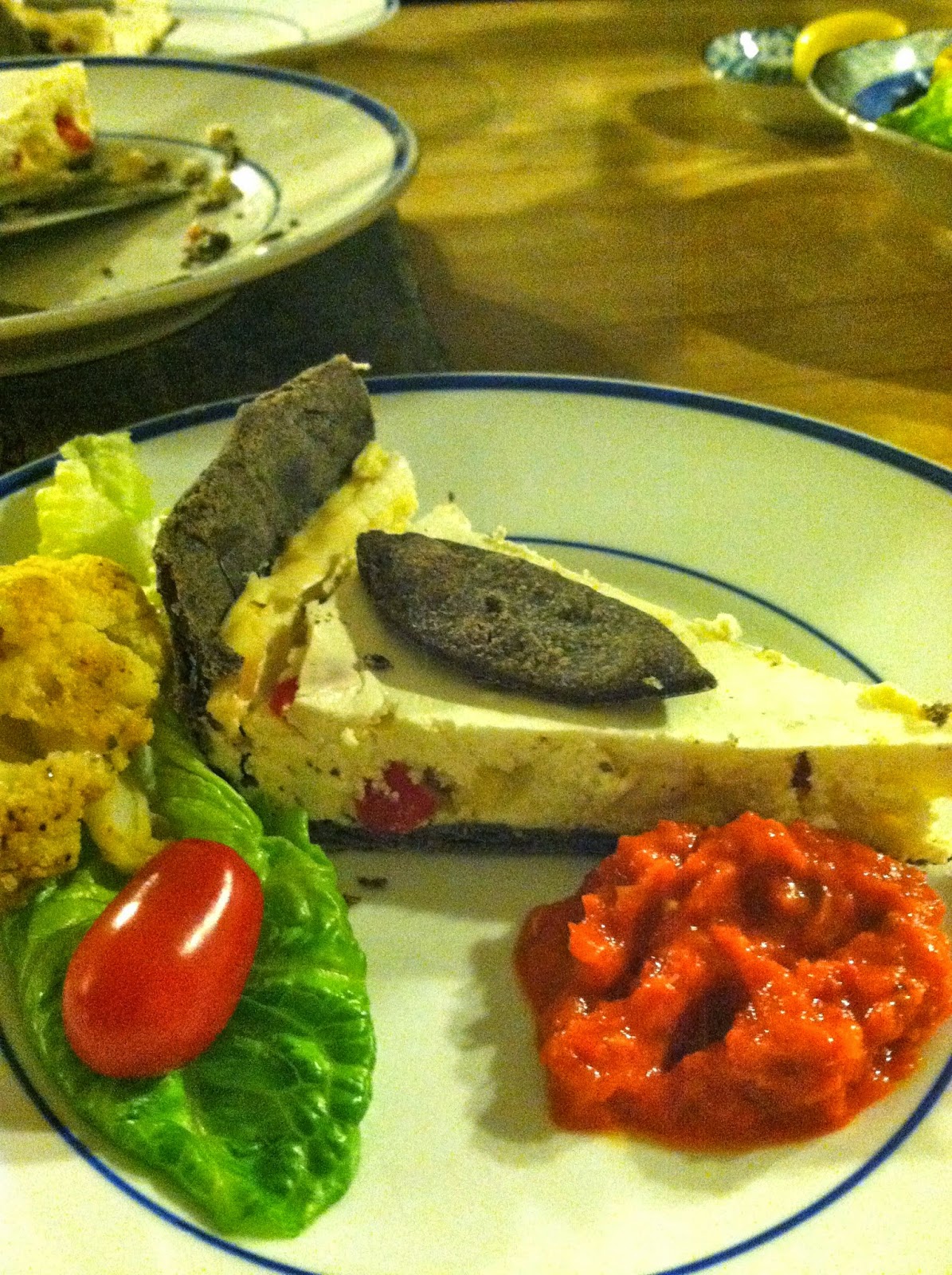 The result:  Both versions were delicious.  Savory buckwheat cheesecake works well as a vegetarian entree, a side dish or even as an appetizer. We found that it tasted even better the next day, served chilled. Ajvar, the popular Balkan red pepper relish, makes the perfect garnish.