Greetings from our Little Ljubljana Kitchen! 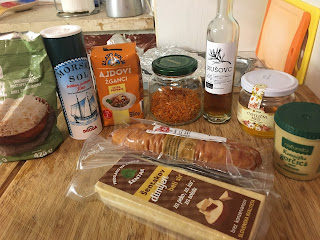 It was a cool morning today and a lovely warm afternoon. Now it is getting cooler again as we prepare for a final dinner at the nearby apartment of some American expat friends.

Sadly, our temporary kitchen will have to be dismantled tomorrow morning, when my husband and I fly back home to California.

We have spent twelve days in this beautiful city, with day trips to a few other places. It has been a wonderful time with some memorable food adventures. I will be writing about them in the coming weeks. We have made daily visits to the Central Market. We have enjoyed two truly remarkable restaurant meals--and everything else has been very good.

It must be possible to have a bad meal in Slovenia. But we have yet to find it!


We made good use of the kitchen in the cozy attached house we rented in Ljubljana's charming Trnovo district. For breakfast, we always ate in. We took full advantage of the wonderful Slovenian breads we found in bakeries and the nearby farmers' market:

During the days, we were always on the ago, so we ate out. But in the evening. when we weren't eating with friends, we had supper at home--usually prepared by my husband.

My one kitchen venture was a diappointment.

I attempted to prepare a traditional dish, using the recipe a new Slovenian friend gave me. Millet and prunes, cooked in milk, with a little cinnamon and honey. What could go wrong with that? 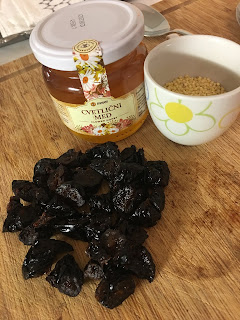 That is a story for another time!

Little Honey Cakes for the Harried (Microwaved in a Mug!) 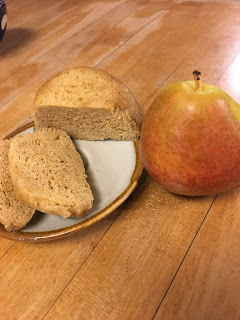 I have never been tempted to make one of those microwaved mug cakes that have become so popular.

But this year the Jewish holidays crept up on me, and I found myself searching for a last-minute version of the traditional honey cake I make every year and continue to tinker with. The Internet offered up one suggestion that surprised me: an applesauce-honey cake in a mug, for those who would be celebrating the Jewish New Year alone.

Well, I wasn't alone--and I am something of a purist when it comes to traditional Jewish honey cake. So at first I dismissed it. But I was feeling pretty harried. Our washer had just been fixed after a two week ordeal and now we were facing power outages in the SF Bay Area. On top of that, my husband and I were getting set to leave for our third trip to Slovenia in just a few days, so I didn't want to create leftovers. A fast mug cake for two started to look more appealing.

So I made the reluctant decision to jump on the bandwagon. There were plenty of honey mug cake recipes available. Most of them were just like this one, which includes some nice photos. Oddly, not even the applesauce-honey version that was explicitly aimed at the Jewish holidays included any of the spices that I consider a hallmark of a traditional honey cake.

So I made a few changes to what seemed to be the standard recipe. I added some traditional honey cake spices: cinnamon, cloves and ginger, along with some vanilla. I also ended up adding an extra tablespoon or two of flour. The batter seemed too runny without it, perhaps because I had used an extra-large egg. And I wanted to be sure the finished product would have the texture of  a cake rather than the soft/sticky/gooey pudding some of the bloggers described.

I also took the suggestion of one online baker and divided the batter into two custard cups instead of the larger mug:

I was very skeptical--and apologetic when my husband discovered what I was doing. But this was really good. Even he liked it!


In both taste and texture, this little cake came much closer to the traditional version than I could have imagined. It was very rich--and light. I served the honey cake in little slices, as you can see from the photos. Unlike the traditional loaf, it tasted good after a short period of cooling--and just fine after a night in the fridge. 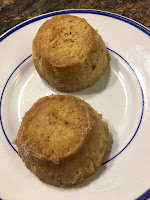 A microwaved honey cake will not brown and it will never have the deep, slightly caramelized flavor of one that is conventionally baked. So I figured that the next time I tried this, I might deepen the flavor by using darker honey and perhaps a little molasses to replace part of the brown sugar. I might also cut the sugar, since the cake was quite sweet.

(Update: two days later, I decided to try that first recipe I had found. Along with the applesauce, it involved a few other key differences: no added fat, less sugar--and baked in a single mug. It came out like a dense and rubbery hockey puck! So I recommend sticking to the standard recipe, including the small changes I made here.)

To those who are celebrating: Happy New Year!  L'Shana Tova! 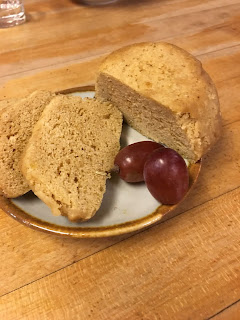 Honey Cake in a Mug

In a small dish, melt butter in microwave. Add honey and beat with a fork. Add egg, brown sugar, and vanilla and mix well. Scoop flour into a measuring cup and mix in baking powder and spices.
Add dry ingredients to the wet ingredients and mix until smooth, adding another tablespoon of flour if mixture seems too liquid.

(Alternative approach to mixing favored by many: Just dump it all in a mug and mix! I haven't tried it this way.)

Pour batter into two lightly greased ramekins--or a single mug if you insist--and place parchment paper on top.  Microwave for 90 seconds and check cake Microwave for an additional 50 or so seconds until cake is firm.  Let cool on a rack and unmold.