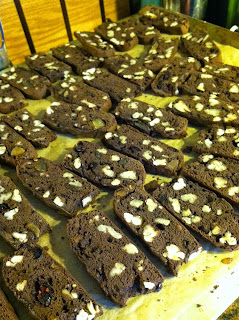 Chopped chocolate is a one of my favorite additions to domestic friends (domači prijatelj), Slovenia's answer to biscotti. But I had never tried an all-chocolate version. When I discovered a tin of exotic Viennese cocoa in the cupboard, it seemed like the perfect time to experiment.

As a foundation, I used my egg-rich Slovenian Christmas biscotti recipe. I just substituted a little cocoa for part of the flour. For extra zest, I added some chopped candied ginger.

The result? A tasty variation, with a chocolate flavor that is intense and bittersweet. These are definitely cookies for adults! 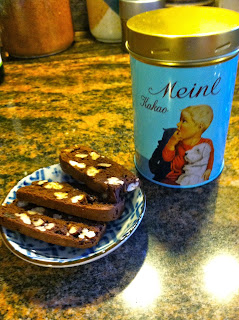 *Note: You can reduce the cocoa for a milder flavor. Just increase the flour, so that you have 140 g when the flour and cocoa are combined.


Combine flour and cocoa and set aside. Beat eggs, sugar and vanilla until thick. Fold in flour-cocoa mixture. Stir in cranberries, ginger and nuts. Pour the batter into an oiled rectangular pan (about 7 x 9 inches) that has been lined with parchment. Bake at  350 degrees for 20 to 30 minutes, or until firm. Remove from oven and let cool slightly.

Turn the cooled cake out of the pan. It will resemble a firm sponge cake or genoise. Cut it lengthwise into two pieces, then slice. For the more traditional Slovenian style, cut into slices that are about 1/2 inch thick and let cool on a rack. Or cut into very thin slices (under 1/4 inch) and bake for about ten more minutes or until firm. Let cool. Enjoy!
Posted by Blair K. at 8:48 AM 2 comments: 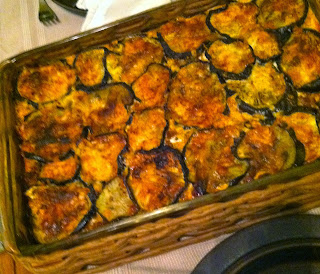 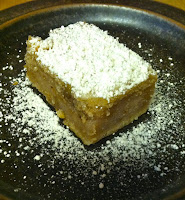 
My first Albanian dinner was a success, so I was eager to expand my horizons. Unfortunately, English language resources for the aspiring Albanian cook are in short supply.

But my resourceful son managed to find a true gem: the Albanian Cookbook (1977, 2000), put together by the Women's Guild of St. Mary's Albanian Orthodox Church in Worcester, Massachusetts. 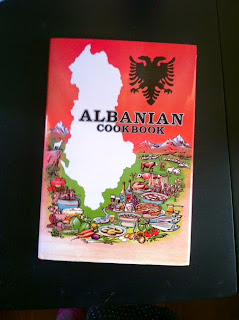 I was excited when my shiny red copy arrived in the mail. This new edition was a much more polished affair then my vintage Slovenian American cookbooks--and it did a better job of maintaining a clear focus on traditional ethnic food. Not a jello salad in sight!

But one thing was familiar: Multiple versions of the same dish, often with minimal differences in the ingredients or method of preparation. This seems to be part of the inclusive spirit behind these collaborative cookbook projects. Everyone has a voice.

I found seven recipes for moussaka, a layered casserole that is popular throughout the Balkans. Four recipes used the familiar ground beef and eggplant combination, two called for  potatoes instead of eggplant, and one used both. All had variations of a custard topping.

One moussaka recipe stood out because of three unique ingredients: cheese, wine and cinnamon. Was this the Greek influence? Whatever its origins, this take on the dish appealed to me. 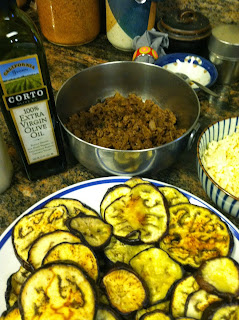 After I had assembled the moussaka, I went back to the Albanian Cookbook to search for an easy dessert. In the pastry section, I found the expected variations on baklava and halva, as well as some unfamiliar sweets. Most of these treats were rich and elaborate concoctions.

One dessert caught my eye. It had a straightforward name, Authentic Albanian Cake, and an equally simple method of preparation: Mix up some water, flour, oil, sugar, nuts, cinnamon, and baking powder in a bowl. Bake, sprinkle with sugar, and serve.

No eggs. No butter or milk. No frills. Was this really Albanian? It sounded suspiciously like some American cakes that used to be popular in the past, with names like Wacky Cake or Depression Cake.  But it was easy enough--almost too easy, so I took a little more care with the mixing. I'm not sure it made much difference. 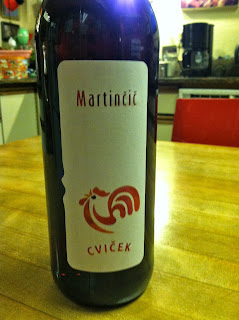 I served the moussaka with a green salad and a nice bottle of Slovenian cviček, a light red wine that is a specialty of my ancestral region of Dolenjska.

That moussaka was a winner. Perhaps it was the unique combination of flavors. Or the authentic Greek kasseri cheese. Or the fact that I took the time to salt and drain the eggplant and to pre-bake it well. But it was the best moussaka I have ever tasted. It was even better the next day.

As for the cake?

Well, it was a surprise, especially once I cut into it. It looked like one of those trays of dense, filled pastries that are common throughout the Balkans and the Middle East: 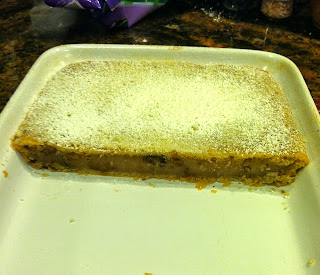 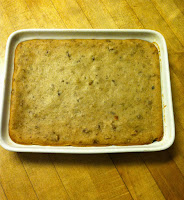 During baking, the batter had magically separated into a light cakey layer on the bottom and top, with a dense, paste-like filling in the middle. Perhaps this was intended to be a quick, economical  mock-baklava for a crowd.

The flavor was very mild. My husband liked it. If I were to make this again, I would increase the sugar and nuts. I might also substitute brown sugar for white and almonds for the walnuts.

Recipes for both these intriguing Albanian dishes follow below. Enjoy!

Update: A month later, I made one more attempt at the Authentic Albanian Cake--with very different results! Go here for details. 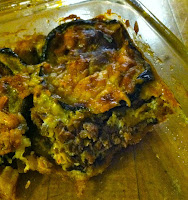 --from the Albanian Cookbook (2000, 1977) by the Women's Guild of St. Mary's Albanian Orthodox Church, Worcester, Massachusetts


To prepare eggplant: Slice eggplant, salt the slices, and let drain for an hour or two to remove the bitter taste. Rinse and pat dry. The eggplant slice can be sautéed in oil (as the original recipe suggests) or my way: brush slices with oil and bake on a cookie sheet until brown. (Turn once during baking.) Set  aside to cool.

To prepare the meat filling: Sauté onions in oil in a large frying pan. Add meat, salt, pepper, and 1/2 teaspoon cinnamon to onions and continue to brown. Dilute tomato paste in wine and water, then stir into the meat-onion mixture. Simmer uncovered until most of liquid is absorbed, about 20 minutes.

--from the Albanian Cookbook (1977, 2000), by the Women's Guild of St. Mary's Albanian Orthodox Church, Worcester, Massachusetts

(Note: I cut the quantities above in half and used an 11 x 8 inch pan to make a smaller cake.)

The cookbook offered brief instructions: Mix all ingredients together in a large bowl and pour into an ungreased 11 x 15 inch pan. Bake at 350 degrees for 45 to 50 minutes or until golden brown. After cooking, sprinkle the cake with sugar and cut into squares.

This sounded like a very large cake, so I divided all quantities in half and used an 8 x 10 inch pan.  I also added a couple of extra steps to the mixing. I combined the flour, cinnamon and baking powder in one bowl and then beat the water, oil, and sugar together in a second bowl. Next, I stirred the wet ingredients into the dry ingredients. Finally, I folded in the nuts and baked as directed.