Last week, I made a short, unexpected trip back to Slovenia. By telephone.

It happened right here in California, at a B & B in Half Moon Bay, where my husband and I had gone for an overnight getaway. After breakfast the next morning, I did a phone interview with the American-born host of a public radio show in Slovenia.

Michael Manske does a weekly show called "Slovenian Roots" on Radio Slovenia International (Radio Si.) In this series, he interviews descendants of Slovenians from around the world.  He found me through my own Slovenian Roots Quest blog and invited me to share my experiences with his listeners.

The live broadcast of this short interview will be tomorrow morning, Wednesday 25 February, at 11:18 CET. (That's 2 AM Pacific time!) If you care to tune in, the Radio Slovenia International website offers live-streaming audio that is simple to access. By next week, my interview should be included in the show's podcast archives, here.

"What did you talk about?" someone asked me. Well, I haven't yet heard the interview, so I am working from memory. But here are my impressions:

Michael is a very skilled interviewer. We covered a lot of ground in a very short time. I spoke mostly about my family history and how close I came to losing my Slovenian heritage, because my mother and her siblings wanted to forget a difficult past. I talked about my belated discovery of the Slovenian Hall in San Francisco--and Mia Rode's wonderful language classes. Michael asked if anything surprised me during my trip to Slovenia this past summer. He inquired about the secret to good potica. We managed to talk about almost everything, except for my fascination with the controversial writer Louis Adamic, who is said to be my grandmother's cousin.

Hvala lepa, Michael! I am honored to be on public radio in Slovenia.

Update: The podcast is now up!  Go here for the direct link. The nine-minute interview included even more than I remembered, including the pivotal role of the Cajun accordion in bringing me back to my own roots.


A little more about Michael Manske:  He is married to a Slovenian woman and has lived in Slovenia since 2001. He is well known for his long-running (and very funny) "How to Become a Slovene" series, which can be heard on the Radio Slovenia website and on YouTube.


I love hearing from readers.

Last month, a charming woman named Sara sent me a question about a traditional Slovenian bread she learned to make from her mother, called menihi or monk's bread. She included a photo of a gorgeous, braided loaf that reminded me of challah, the popular Jewish Sabbath bread. Had I ever heard of it?

The name didn't ring a bell, but I had seen images of Slovenian breads that sounded similar. I started to search.  No monk's bread, but I did find references to several other festive, decorated breads on the Slovenian government's official Travel Guide. The closest was the photo of an impressive-looking bread called bosman, described as:

"...a richly decorated ceremonial bread, which used to be a compulsory gift to brides, as well as newborns and children being christened. It is decorated with several lines of plaited dough and various dough ornaments, as well as paper flowers."

I found a recipe for bosman, or plaited bread, in Janez Bogataj's The Food and Cooking of Slovenia. The dough was very much like Sara's monk's bread, and both seemed similar to the egg-rich challah recipes I had made in the past.

Most Central and Eastern European cuisines do seem to have a tradition of making light, braided yeast breads for holidays and other celebrations. These treasured dishes are a reminder that white flour was once a precious commodity that ordinary people enjoyed only on special occasions.

Bogataj's dough recipe turned out to be surprisingly easy. No initial sponge or even proofing of the yeast.  He specified "easy blend" yeast, which I took to mean standard dry yeast. (After the fact, I discovered that this means "rapid rise" or "instant" yeast, which is best for this rapid mix method.)

The challenge came in the shaping. Bogataj provided elaborate instructions for a dramatic nine-strand, three-tiered loaf, topped with little dough figures of birds, flowers, butterflies, balls, and mini-braids! Fortunately, he did offer another option: a simple, three-strand plait.

I hesitated to make a single loaf of bread that used seven cups of flour, so I decided to cut down his original recipe to two-thirds. I also corrected a couple of the metric conversions. Otherwise, I followed his original recipe.

For the recipe and the result, read on.

(adapted from Janez Bogataj's "Bosman Plaited Bread" in The Food and Cooking of Slovenia.)

*Note: Oil is often preferred in traditional challah recipes, so that those who follow Jewish dietary laws can serve it with both meat and dairy meals. Feel free to substitute!

Sift flour and salt into a large mixing bowl and stir in the dry yeast. Make a well in the center and add the remaining ingredients. Mix together to make a soft dough, then knead on a floured board for about ten minutes until dough is smooth and elastic.

Place dough in a clean bowl and cover with plastic wrap. Let rise in a warm place until doubled in size. (The rising took me one hour, although the original recipe suggested two.)  Punch down and let rest for ten minutes before shaping.

The full ceremonial version of this bread involves multiple braided layers, one on top of the other, with little decorative bits on tip. Three braids is simplest. I decided to compromise. I made a slightly fancy four-strand braid, which results in a nice compact loaf.

To make a four-strand loaf similar to the one in the photos, divide the dough into four equal balls. (Use a scale, if you like.)  Roll each piece into a twelve inch rope or sausage shape. Press strands together at one end and then begin to braid, starting with the outside strand on the far right, then moving to the outside strand on the far left, and then back again. This alternating, side-to-side braiding pattern is "under two, back over one."

For a good illustration of the four-strand pattern, see this blog post about challah, the Jewish version of a similar bread. The web is full of guides to even more complex patterns.  And remember: there is nothing wrong with a simple three-strand braid!


Transfer the loaf to a baking sheet that is greased or lined with parchment paper.  Cover with oiled plastic wrap and let rise in a warm place until doubled, about 1 hour.

Preheat oven to 350 degrees F (180 C).  Before baking, glaze the loaf with the egg wash. Bake for about 45 minutes, until loaf is golden brown and sounds hollow when tapped on the bottom.

The result? This was was one of the easiest and most successful challah-type breads I have ever made. It was rich without being cloying and just slightly sweet. The texture was light but not too airy.

Even in these reduced quantities, I ended up with rather large loaf. But we made good use of it. The first couple of nights, it was the perfect dinner companion to my homemade cevapčiči. After that, it became breakfast fare. Bosman makes wonderful toast! On the weekend, my husband made French toast. He turned the last bits into croutons for salad. So nothing went to waste.

This bread is definitely a keeper! 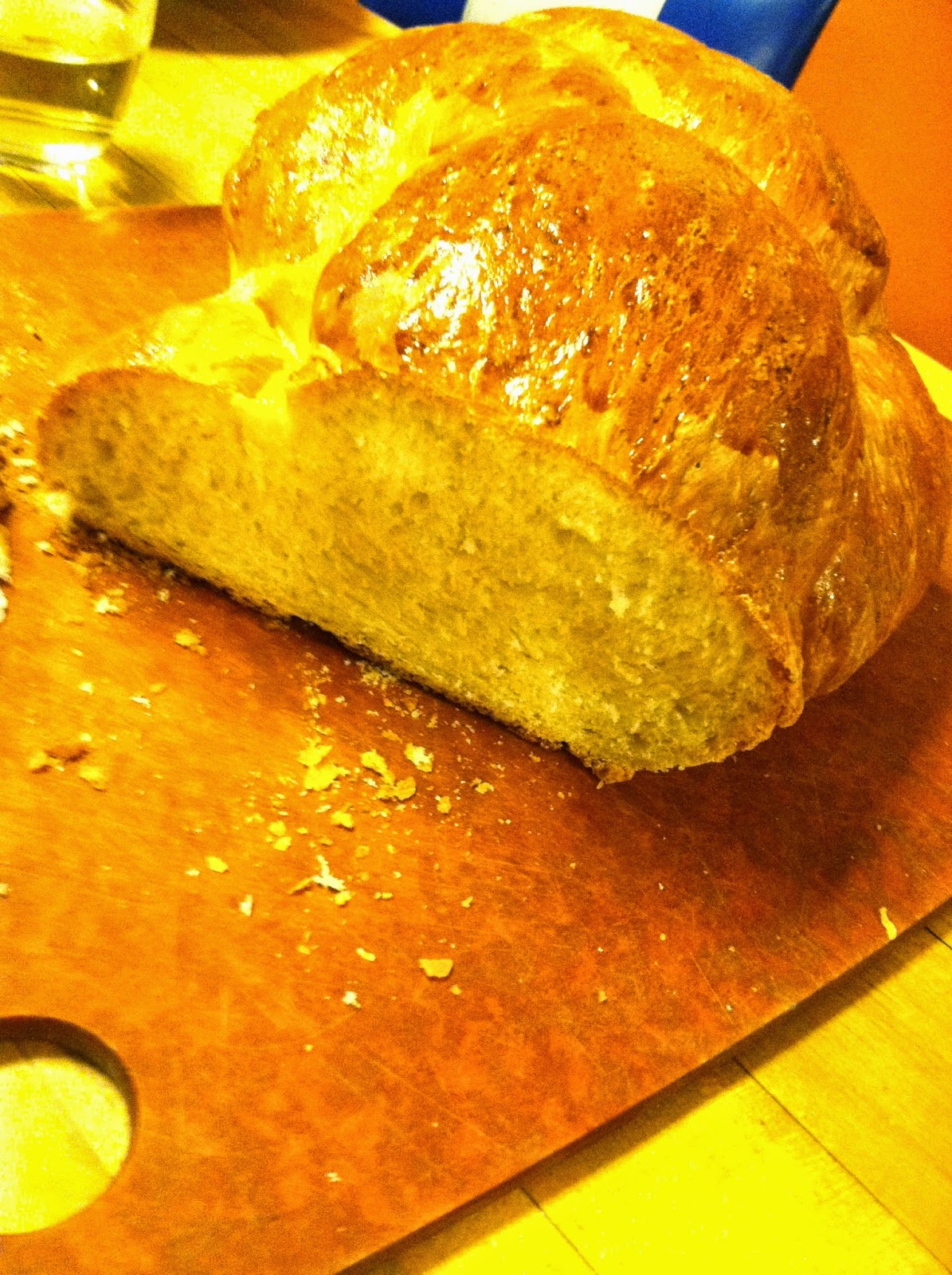