New for 2017: Potica Babies! An Old Favorite with a New Name 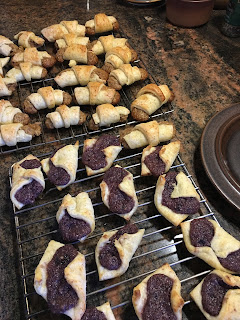 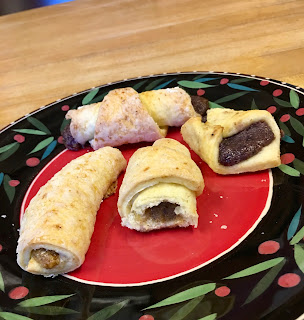 Last week, I had a sweet dilemma. Two holiday potluck parties in the space of three days:A musical gathering at the home of a Cajun music friend, followed by a Christmas party at San Francisco's Slovenian Hall. I wanted to bring a dessert that would work for both events.

I ruled out potica for two reasons. For one thing, I was pressed for time. But I also knew that our treasured celebration dish is often overlooked in a holiday buffet line of non-Slovenians. Is it too rich? Too plain? Too hard to categorize? I don't know. But I hate to see a half-finished loaf of potica languishing on a platter at the end of the evening.

So I decided to make a holiday sweet I had wanted to tackle for awhile: A yeast-raised version of the ever-popular pastry/cookie you can see in the photos at the top of this page. These delicate filled creations go by a variety of names. But they are everywhere during the winter holidays. I thought it would be a good compromise, since I could use a walnut filling that would capture the flavor of potica.

What do you call these tasty morsels? The proper Slovenian name, rogljički ("little horns") is challenging to say and spell, so many of my vintage cookbooks use one of the more familiar labels: kifli, kolache, or nut horns. (The popular Jewish version is known as rugelach.)

This pastry originated in Central and Eastern Europe, with an enriched yeast dough as the foundation. But the version known to most Americans--artfully shaped cookies, often buried in confectioners' sugar--has a definite New World lineage. The key ingredient is cream cheese, an American invention. The recipe was introduced in 1939, in an inspired piece of World's Fair marketing by the Philadelphia Brand Cream Cheese company.

The ubiquitous cream cheese pastry is dense and rich: one part butter, one part cream cheese, two parts flour, often with eggs. Little or no sugar--and no leavening. I have used this style of pastry in several recipes on this blog: American Slovenian Nut Horns, made with cottage cheese instead of cream cheese. Baked Flancati, in which sour cream is added. And I have been making Jewish rugelach for years.

But I had never tried the original European yeast-raised version.

When I turned to my vintage Slovenian American cookbook collection, there was no shortage of recipes. Each cookbook had at least one. They were virtually identical: Butter, sour cream, egg yolks, yeast, and flour, in the proportions you will find in the recipe below. There were slight differences in the method of preparation. I stuck closely to the "Kifli (with yeast)" recipe in my newest old cookbook: Pots and Pans, from the Slovenian Women's Union of America. I liked the simplicity of the dough preparation, which was similar to making pie crust.

I prepared two fillings, walnut and jam. Although I consulted my cookbooks, I ended up improvising. I wanted the walnut filling to taste like my family's potica, so I added honey and cinnamon.

Somewhere along the way, it hit me: I was making little poticas! The walnut filling was the same, except for the addition of egg white. The refrigerated sour cream dough was almost identical to my family potica recipe--except for the absence of sugar.

And when I cut into one of these little horns, it even looked like a potica: 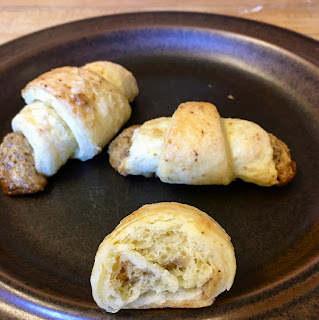 Well, all right. Maybe it looked more like the end of a potica, where there is more dough than filling. But this was clearly a miniature yeast bread. Rich, but not as rich as the butter-cream cheese version. It had the special scent and tang of a yeast-raised pastry. And, unlike potica, it could be served straight from the oven.

And best of all: There were no leftovers!

At the Cajun music party, these little horns disappeared in a half hour. Luckily, my accordion friend Mark, who makes kifli himself, managed to snag one. He even gave me a thumbs up!

Two days later, when my husband and I arrived at the Slovenian Hall, I was greeted by an anxious question: Had I brought potica? No, I admitted, not this time. I figured someone else would. But no luck. Not one of us had come through.

That's when I decided these little horns deserved two names: The proper Slovenian one, and one more. After checking on the spelling with Mia, my Slovenian teacher, I wrote out the label:

Toward the end of the evening, I noticed that just three of these sweet babies remained on the tray. I quickly wrapped them up and slipped them to my teacher.

This recipe is a work in progress. But I think it's a keeper. 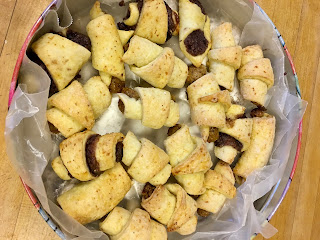 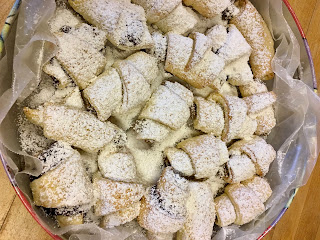 
For the dough: Combine flour, salt and yeast in large bowl. Cut in butter until mixture is crumbly. Mix sour cream and egg yolks. Make a well in center of the large bowl and add the sour cream-egg mixture. Combine into a soft dough. Turn out onto lightly floured surface and knead for several minutes, until dough is smooth. Divide into 6-8 balls. Flatten into discs, wrap in plastic or waxed paper, and refrigerate for 1-2 hours or more.

Alternatives: Some recipes recommend dissolving yeast in a few tablespoons of warm water or milk before proceeding as above. Others treat the butter differently: softening it first, or even melting it in warmed sour cream, before adding the yeast. With any of these methods, the dough will take longer to chill. 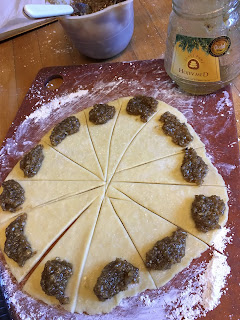 To shape: Roll out each portion of dough onto a surface that is dusted with confectioners' sugar. To make the familiar crescent shape, roll each portion into an 8-9 inch circle and cut into 8-12 wedges. Place a rounded teaspoon of filling on the wide edge (see photo above) and roll up. Place on a parchment-lined cookie sheet with the narrow pointed end underneath. Bake at 375 degrees for about 20 minutes. Let cool, then dust with confectioners' sugar.

Other possible shapes: Roll into a rectangle, cut into diamonds, and pinch two points together to encase the filling. Or roll up the rectangle into one or two long rolls and cut into shorter lengths.


Walnut Filling (makes 1+ cup, enough for half the dough)


Jam Filling (makes about 1+ cup, enough for half the dough)


Other Filling Options: Any favorite potica filling should work. My homemade poppy seed filling would be a good choice. Be aware that too much egg or liquid can cause the filling to run or expand, especially if you use the open-ended "horn" shape.