Three milks cake is a seductive sweet with a mysterious past.

North and South Americans know it as tres leches ("trace lay-chess"), a festive celebration cake with Hispanic roots. But I first discovered it this summer in the Balkans, where it is called trilece or trileqe (the Albanian spelling) and pronounced "tree-leh-che."

My first taste of trilece came during the lavish breakfast buffet ("the Swedish table") at the Hotel Sirius in Prishtina, Kosovo's capital, where my husband and I were staying. When I spotted a platter of pale, caramel-topped squares among the dessert offerings, I expected crème brulée. Instead, I discovered an intriguing, hard-to-place sweet with an unusual texture, like a firm bread pudding, or perhaps a semolina custard. It tasted good, whatever it was.

The following day, our son's charming fiancée took us all to a lovely old Ottoman town in Albania called Shkodra. The itinerary included a stop at a local café, her favorite source for a special dessert whose name I didn't quite catch. When the café turned out to be closed, she kept walking until she found an unlikely alternative, a Frank Sinatra-themed venue called Bar Caffé My Way.

The waiter presented us with a moist, caramel-drenched square, resting in a pool of milky sauce. I recognized it immediately. This had to be an upscale version of the hotel mystery cake.

I took a bite. This elegant version was even better. "What do you call this ?" I asked my future daughter-in-law, who was born in Kosovo.

"Trilece," she said. "Three milks cake. Tres Leches?" She was surprised I'd never heard of the Latin American version.

So that was my official introduction.


Back home, I was determined to reproduce this unusual Balkan sweet.

My research turned up a staggering number of recipes for tres leches cake, a dish that has spread far beyond the Latin American communities where it first became popular, at least on this side of the Atlantic. Celebrity chefs (Emeril, Alton Brown, Martha Stewart, The Pioneer Woman) all have versions, which follow a similar formula. A layer of plain yellow cake (usually a sponge cake) is soaked in sweet milk sauce, sometimes layered with a filling, and topped with whipped cream.

The milk sauce is, of course, the key, and so simple it hardly qualifies as a recipe. Open up a couple of cans (sweetened condensed milk and evaporated milk) and a container of fresh cream or half-and-half.  Add a little vanilla and and maybe some rum or brandy. Mix well. That's it.

So what difference, if any, is there between the American/Hispanic tres leches cake and the Balkan-style trilece? I would suggest that it comes down to two critical elements: topping and texture.

I finally tasted my first tres leches cake last month, at the birthday party of a friend (whose roots, coincidentally, are Croatian.) She had ordered it from a Mexican bakery in Oakland. It was a handsome, slightly moist cake, covered in a cloud of sweetened whipped cream.  As I had suspected, it was closer to a conventional American layer cake than the dessert I tasted in the Balkans.

Balkan cooks skip the whipped cream in favor a thin, rich caramel topping that contrasts nicely with the bland, milky sweetness of the cake. They also use a heavier hand with the milk sauce. Trilece ends up as a pudding/cake hybrid, with sauce pooling on the plate.

These two dishes are clearly connected. So where did three milks cake originate?

Well, it's complicated. Even though people are quick to identify the best local source, or claim to know the baker or restaurant that first introduced the popular sweet to their particular community, the ultimate origins always seem to be in the mysterious elsewhere. Sometimes an ocean away.

Several Balkan sources concede that the origins of trilece are probably Latin American, or at least Spanish. Many Latin American food historians point to European roots. In Florida, someone suggested that a restauranteur got his locally famous tres leches recipe from a European friend with a German surname. A café owner in Istanbul believes Albanian bakers get the credit. A Mexican food writer thinks the cake came from Nicaragua or Guatamala. A Latina friend from New Mexico believes the ultimate source must be medieval Spain, or possibly Sephardic Jews.

(For more history, check out this well-done article from Culinary Backstreets, which looks at the roots of the trilece craze in Istanbul!)

Here is my favorite origin story, at least for the American version of the dish. Many food historians argue that it all goes back to a recipe that was printed on canned milk labels, starting in the 1940s, by one of the biggest South American distributors, Nestlé foods.

There is a certain whimsy to that story, true or not. But many recipes for three milks cake do seem to use that Nestlé milk can recipe as a starting point.  So that is where I began, when I made my first attempt at Balkan-style trilece, early in the fall, for a small dinner party. It was a success.

I have made four versions so far and have stuck closely to my original recipe, adapted from Nestlé, which you can find at the bottom of the page.

Once, I experimented with the sponge cake layer, by adapting a recipe from an Albanian source (more flour and sugar, plus a touch of baking powder.)  I have made the sauce with and without rum, and I have varied the amount I poured over the cake. I have used a few different caramel sauces for the topping. Along with my tasters (my husband, our son and his fiancée), I prefer the simple, egg-rich sponge cake in the Nestlé recipe, with as much sauce as the cake will absorb. The sauce tastes good with rum, although a Balkan purist would omit it. Half-and-half is a good substitute for whipping cream. Eggnog is not.

Below you will see photos of my most recent trilece, baked for a very special occasion: the engagement party of our son and new daughter-in-law. She was my chief taster as well as my cooking partner. Our joint venture in my California kitchen turned out to be the first time she had ever tried to make three milks cake.

It was the sweetest trilece of all. 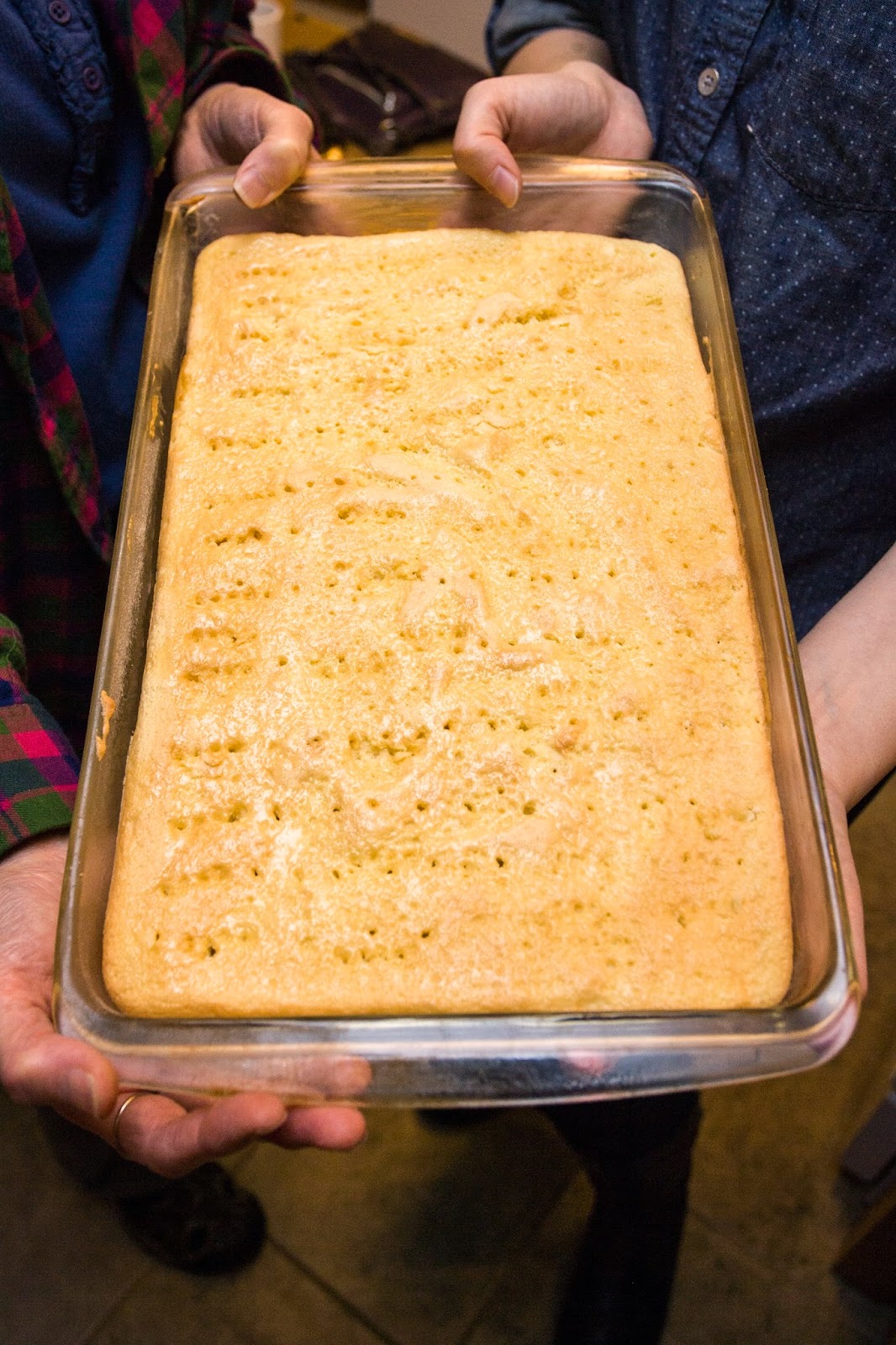 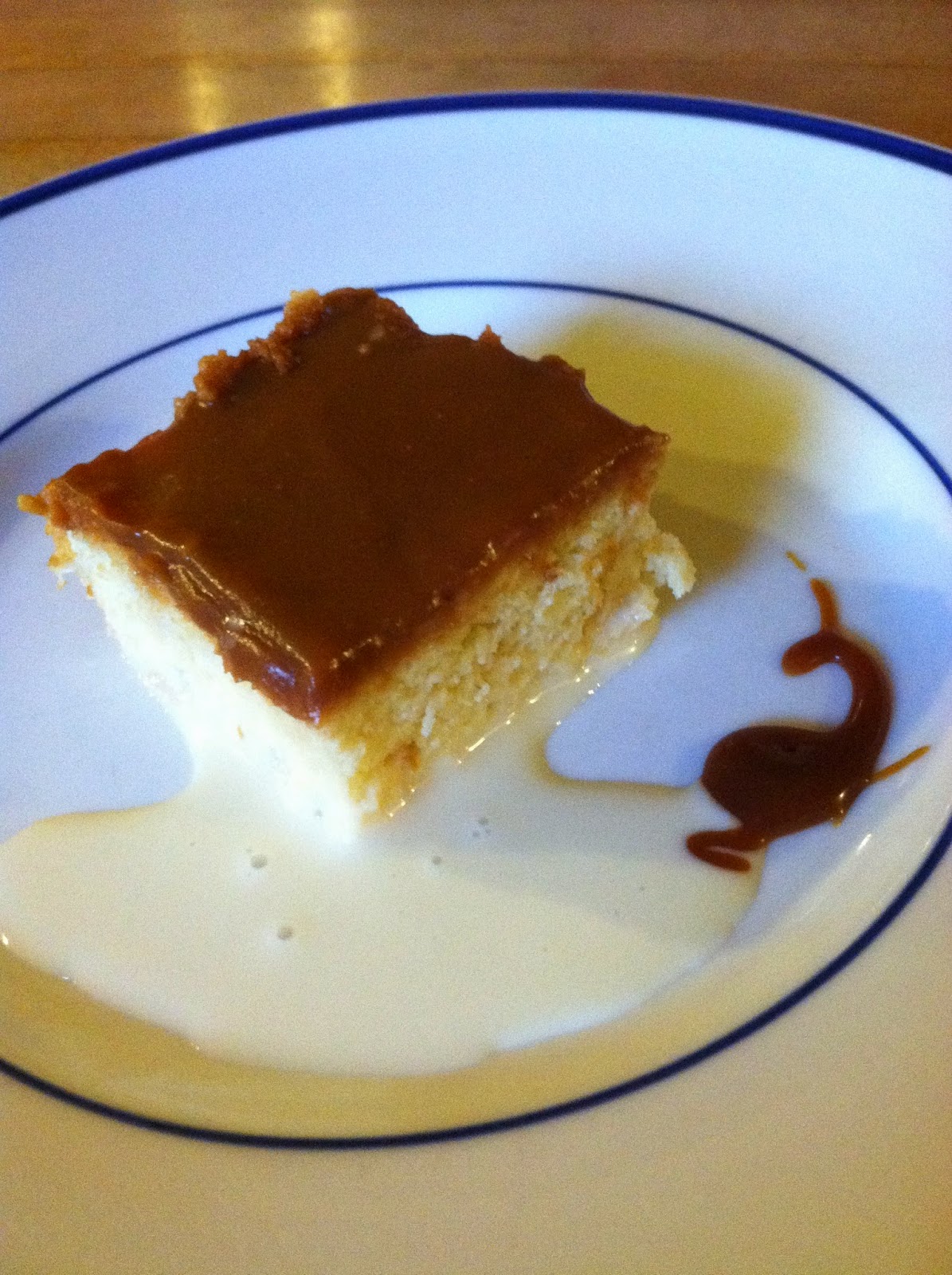 For the sponge cake:

For the milk sauce:

First, make the milk sauce: Combine all the ingredients with a blender, a large shaker, or a mixer. Chill.

Next, make the sponge cake: Whip egg whites with half the sugar until stiff. Beat yolks with the other half of sugar for about five minutes, or until thick and lemon colored. Fold whites and sifted flour alternately into yolk-sugar mixture, being careful to avoid deflating.

Pour batter into one or two pans that have been greased and floured. Options include: one large rectangular pan, about 9 x 12 inches; a large spring form pan; or two smaller rounds or rectangular dishes. Bake at 375 degrees for about 20 minutes or until firm and slightly brown. Let cool on a rack for about ten minutes.

To assemble: After cake has cooled slightly, poke holes in top with toothpick or skewer. Pour sauce over the cake slowly, in several installments, until most of sauce is absorbed. Refrigerate extra sauce to add to cake later, if desired. Cover cake and refrigerate for several hours or overnight. (Check cake periodically. If it has absorbed all the sauce, consider adding more!)

About an hour before serving, remove cake from refrigerator and spread with a thin layer of caramel sauce. This is easiest if sauce is at room temperature. Drizzle sauce or drop in small spoonfuls over surface of cake, then carefully spread with a spatula to avoid tearing the cake.

To serve, cut cake in small squares. Extra sauce can be served on the side. To be extra-decadent, add a swirl of caramel sauce.

Cake can be enjoyed for several days if kept under refrigeration.