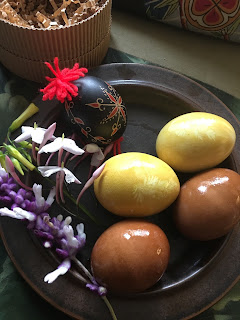 Where did the time go?

Easter and Passover have come and gone and I still haven't posted some of the dishes I prepared over the Christmas holidays. (Was my last post really on December 25?)

Here in California, we have been sheltering in place for just over five weeks. The day before the order went out, my husband and I finished up the last of the Christmas potica at a bittersweet "last supper"shared with our friend Natasha from my Slovenian class. It will probably be many months before we can welcome another guest to our table.

We are becoming accustomed to cooking in confinement. Making do with whatever is at hand. It is far from austere. I know how fortunate we are compared to so many other people. I feel grateful every day. But it is not the same.

Like those festive hard-cooked eggs I first made for Easter (and Passover) in 2016 and finally wrote about the following year. Before that, I had never colored eggs with onion skins or any other natural dye. And I had never heard about creating intricate patterns by attaching small leaves to the eggs before boiling.

This simple folk art is practiced in Slovenia, as well as other communities in Europe. I discovered that this style of decoration was also a tradition in some of  the Ashkenazi (Eastern European) Jewish communities where my husband's ancestors once lived.

I was already in the habit of making a traditional Passover dish of the Sephardic (Spanish) Jews: Huevos Haminados, or long-cooked eggs, in which eggs are boiled or baked for hours with onions and onion skins, to create color as well as an intriguing change in flavor and texture.

So I had come to look forward to drawing on all these traditions to create beautiful eggs that had a place in the two springtime holidays that are part of our family histories.


But this year, things were different. I had to work with what was on hand, since we were trying to rely on online ordering rather than shopping for groceries in person.

At first, we had only brown eggs available and just a small handful of onion skins to color them, so there wasn't much point in trying to create those lovely patterns. I boiled just four eggs, and I added some coffee grounds to try to deepen the color.

Then another grocery order arrived and we had white eggs. But the refrigerator held just a small sliver of onion. Now I could try to create patterns, but I had to come up with another dye. I still had some of the home-dried orange marigold tea a friend in Slovenia had given me during our recent visit in the fall. As I watched the eggs boiling away, the color looked too pale, so I added some turmeric. 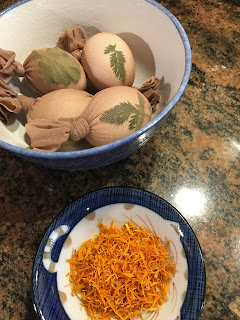 As you can see in the photo at the top of the page, my eggs turned out more muted this year. Tan and pale yellow, rather than the deep burnished russet color of past years--or the new golden hue I was hoping to create. Our celebrations were muted as well. A virtual Passover seder with old friends in Chicago, and a Zoom meeting on Easter Sunday with my siblings.

But at their core, the eggs still had that same distinctive look and taste: a creamy texture, a brownish hue, a tangy nut-like flavor. However imperfect, they could still speak to me of family and tradition, of love and memory, and of survival and hope.

Belated holiday greetings, and happy springtime, from our house to yours. 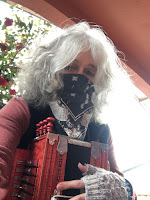