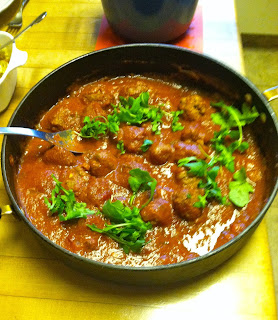 I first made these simple but flavorful meatballs in June of 2012, during my inaugural year of weekly Slovenian dinners. The foundation was a recipe I'd spotted in Woman's Glory: The Kitchen, my first vintage cookbook. Meatballs flavored with caraway, cheese, and bacon sounded like an intriguing Slovenian alternative to the more familiar Italian version of the dish.

My first version of caraway meatballs turned out well. It soon became a favorite.

Two years later, I decided to create a healthier version, with no added salt and fewer carbohydrates.

In some respects, I followed Woman's Glory more closely: chopped fresh pepper instead of celery, and no matzo meal or bread crumbs in the meat balls. Since I skipped the salt, I compensated by increasing the black pepper and adding some garlic. I used turkey bacon instead of regular bacon in the sauce. Finally, I served the meatballs over spaghetti squash instead of pasta or polenta.

The result was delicious. Full of Central European flavor and guilt-free. And by skipping the bread crumbs and the pasta, it also becomes gluten-free! 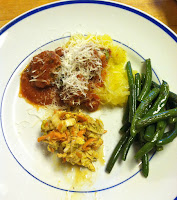 Mix all the ingredients for meatballs. Form into balls and set aside.  For sauce, brown the bacon and onions, then add meatballs and brown.  Add tomatoes and seasonings.  Simmer an hour, or longer if you like, adding water as needed.

Serve over spaghetti squash (to make it low carb and gluten free), polenta, or spaghetti.  Sprinkle with grated parmesan cheese, if desired.