Šarkelj (Slovenian Gugelhupf) for the Fourth of July! 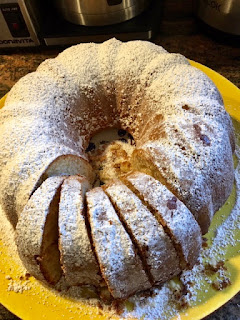 A Fourth of July celebration might seem like an unlikely occasion to introduce a new Slovenian dish. But our annual neighborhood gathering is a perfect opportunity to do just that. For one thing, a potluck is always low-risk. And what are the chances that someone else of Slovenian heritage will show up and weigh in on the merits of my latest ethnic cooking experiment?

I have done this twice before, with mixed results.The first time, I made a successful debut with the multilayered phyllo delight known as Prekmurska gibanica. The next year's offering, an unusual Slovenian cheesecake, sounded good on paper, but it emerged as a soft pudding encased in a tough buckwheat crust.

This year, I didn't decide until the morning of the Fourth of July that I wanted to come up with a Slovenian dessert to bring to the gathering. So my choices were limited. This dessert had to be ready by afternoon. And, since the stores were closed, I had to make do with ingredients already at hand.

I also wanted to use my Kitchen Aid stand mixer, the Christmas gift I was still figuring out how to use.

I found the perfect choice: Šarkelj ("Shark-el"), the Slovenian version of gugelhupf. I had been curious about it ever since I discovered this strange outlier in the "potica" section of the vintage cookbook that launched my ethnic cooking project: Woman's Glory, The Kitchen. It was the first in a series of cookbooks published by the Slovenian Woman's Union of America (know today as the Slovenian Union of America.)

Gugelhupf (sometimes called "kugelhopf" or "bundt cake") is the familiar brioche-like sweet yeast bread with the cylindrical round shape. It is popular throughout Central Europe, as well as in France. The ingredients are simple but the preparation is not, because the rich yeast dough is too soft for be hand kneaded. Some of the recipes in my vintage cookbooks call for beating the batter-like dough with a wooden spoon for twenty to thirty minutes! So this is one of those dishes I might never have tried before I had a heavy duty stand mixer.

The recipe below closely follows two similar recipes: "Holiday Bread--Šarkelj" from the cookbook of the Progressive Slovene Women of America, and "Sharkel or Formcake" from Woman's Glory. Most of my changes were dictated by necessity. Low fat milk, since that is all we had in the fridge. A little oil to stretch the butter. Anisette and dried apricots, which provided an interesting taste alternative to the raisins and rum in the original recipe.

Thanks to my new stand mixer,  the entire process was fairly easy--especially compared to making potica! And my no-stick bundt cake pan worked like a charm! (I'd had bad luck in the past, when I tried to use it for baking potica.) 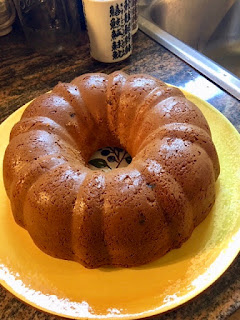 The result was a delicious, mildly sweet yeast cake, ideally suited for a special breakfast or brunch, or perhaps afternoon coffee or tea. It looks impressive, too, especially with a sprinkle of confectioners' sugar and some fresh berries on the side.

The šarkelj seemed to be well received at the July Fourth potluck.

And guess who showed up at the end? Some new neighbors, a nice young couple and their baby. The mother turned out to be a Northern Minnesota native with Slovenian-Finnish roots! 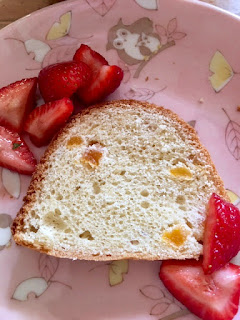 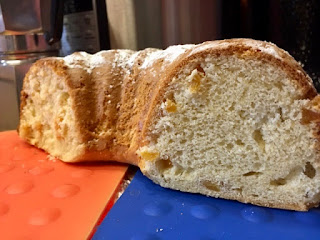 First, make a sponge: In a small bowl, dissolve yeast in milk. Mix in flour and sugar.. Set aside to rise while preparing the rest of the dough.

In a large bowl (or the bowl of your stand mixer) cream butter and sugar. Mix in the beaten egg yolks and lemon rind. Then add the yeast mixture and mix well. Combine flour and salt and add to bowl, alternating flour mixture with cream or milk and rum. Mix well. Beat dough, following one of the two methods below. Add dried fruit at the end.

The traditional mixing method: Beat the dough with a wooden spoon for 20-30 minutes until dough is smooth and mixture leave spoon.

The modern method:  Use a stand mixer, and follow the directions for speed and timing that come with your model. It will take less time, probably 5-10 minutes.

Pour dough into a well-oiled Bundt cake pan. Cover and let rise in a warm place until double. Bake at 350 degrees for about 50 minutes. Let cool before removing from pan. If desired, sprinkle with confectioners sugar.