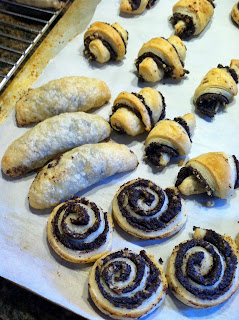 Poppy seed filling may be an acquired taste, but I have always loved the assertive, slightly musky flavor. I associate it with Christmas. Of course, I did grow up in Cleveland, an ethnic town that was home to many people with Eastern European heritage.

I never did associate poppy seed filling with potica. (The very idea would have been sacrilege in my family!) I was most accustomed to it in Danish pastries and in those delicate filled cookie-pastries like the ones at the top of the page. (I'll be posting that recipe soon.) Those rich little cookies go by many different names: Kifles. Kolache. Nut Horns. The Jewish version is called rugelach.

When I began to explore Slovenian cooking, I rediscovered poppy seed filling. I used it in prekmurska gibanica and even in potica. But I always relied on the familiar canned version, doctored up with a few flavor enhancements. It tasted just fine. 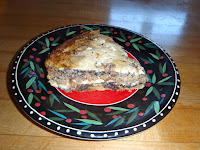 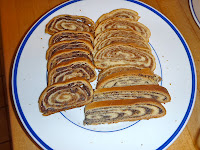 This year, I decided to make my own. It was a little daunting, because I had read that the poppy seeds needed to be ground--and that a food processor or a blender wouldn't do the trick. The ideal solution was a special grinder imported from Europe, but that seemed impractical--and expensive.

An electric coffee grinder might work, according to some sources, but only if the poppy seeds were ground in small batches. I decided to give that a try.

I found a number of recipes in my Slovenian cookbooks. I finally settled on a potica filling recipe I found online from a Slovenian source. It was an all-purpose recipe, using either walnuts or poppy seeds. I cut it down by half, modified it just a little, and made it twice, in both a regular and a vegan version. Both were tasty, although the first time I didn't grind the poppy seeds long enough.

My grinder worked best when I processed no more than 1/3 cup of seeds at a time for a full minute. During grinding, the seeds begin to clump together and the color changes from blackish-blue to brownish-gray. The end product should "look and feel like wet sand." You can see the before-and-after photos below. 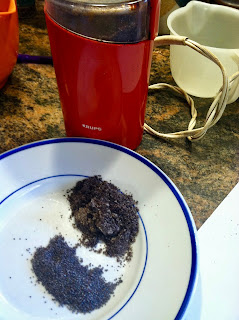 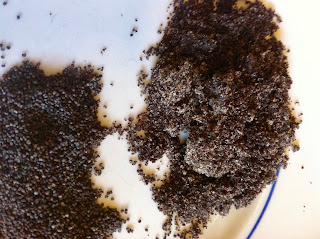 The recipe below makes about two cups of filling. Plenty for a single batch of cookies. For a big batch of potica, you will probably need more--especially if you love the taste of poppy seeds! 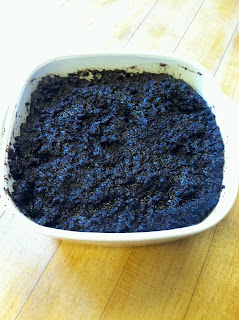 Rinse seeds and drain. (This may be an optional step.) Grind them in small batches in coffee grinder for about a minute. The resulting mixture should look and feel like damp sand.

Melt honey and butter in milk, add sugar, and stir till dissolved. Add poppy seeds and stir. Simmer for a few minutes, adding more milk if needed. Take off stove. Beat egg with rum, then stir it in gradually so the filling doesn't curdle. Add other flavorings. Add more liquid if needed and continue to simmer till thick. (Don't overdo this--it thickens as it cools.)

The vegan almond version: use almond milk and vegan butter, date or agave syrup instead of honey, and 3 tablespoons aquafaba or other egg substitute.  Flavor with amaretto instead of rum.

Follow the directions for preparing and shaping the dough from my family recipe, or from my gluten-free or vegan adaptations. Brush the rolled-out dough with melted butter (or dairy-free substitute) as directed and then spread it with the poppy seed filling. If filling seems too thick, add additional milk or spirits. This recipe probably makes enough filling for half the loaves in the standard recipe, or for the full recipe in the smaller gluten-free and vegan versions. But it's hard to judge (it depends on how thinly you roll the dough and how much you like poppy seeds!) so when in doubt make extra. Some recipes suggest adding chopped walnuts or raisins, which makes a nice addition and will stretch the filling.