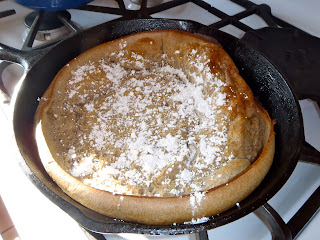 Everyone loves the eggy, skillet-baked pancake that most Americans call a Dutch Baby.

What happens if you add a little buckwheat flour?

I wish I could claim this as my own Slovenian-inspired innovation.

But the credit goes to Deb, over at the popular Smitten Kitten blog.  She paired the pancake with a rich, salt-kissed caramel topping.  No surprise that her recipe for Buckwheat Baby with Salted Caramel Syrup has spread like wildfire.

The dish looked delectable. The addition of buckwheat flour spoke to my Slovenian heart. In fact, it seemed reminiscent of my own creation, Buckwheat Breakfast Crumbles.  But with salt in the pancake and salt in the topping, this Baby was not exactly a good fit for our new low-sodium lifestyle.

So I decided to make a healthy version for Father's Day. No salt.  Less fat.  I had planned to use vegetable oil instead of butter, but my husband suggested we try his latest discovery: coconut oil. And instead of that decadent salty caramel sauce, I improvised a nice light fruit topping: strawberries and blueberries mixed with apricot preserves, almonds, and touch of amaretto.  Not too shabby.

For the batter, I followed the basic flour-milk-egg proportions suggested in Smitten Kitten. I eliminated the salt and added brown sugar and vanilla as a flavor boost.  I also increased the quantities by half, since I thought that Baby might puff up a little more sucessfully.

I decided to call my adaptation a Slovenian Buckwheat Baby Pancake. 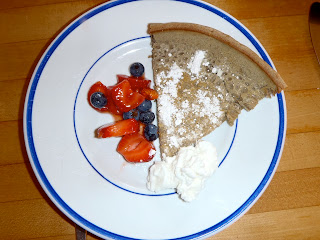 
For fruit topping: Mix ingredients together in whatever proportions you wish.  Let sit so flavors can blend.

For the pancake, mix all ingredients together in a shaker (as I did) or by beating in a bowl until smooth.   Heat coconut oil in a cast iron skillet on top of the stove until hot.  Pour in the batter and place in a 400 degree oven.  Bake for 15 to 17 minutes until puffed and golden.

Remove pancake from the oven.  Sprinkle with confectioners sugar.

Cut into wedges and serve with fruit topping and (if desired) Greek yogurt on the side. 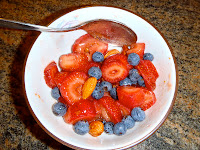 This was delicious!  The buckwheat provided a nice hearty tang. The coconut oil allowed the pancake to brown just right and it added a mild, intriguing flavor. (No wonder the New York Times calls it the new darling of the health food world!) The fruit topping was light and flavorful without being overwhelming.  And best of all: no added salt. 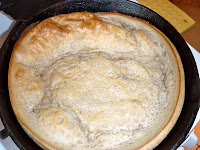 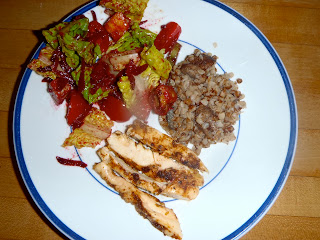 Back in August, I discovered an online recipe for smoked paprika chicken. This easy, elegant grilled entree seemed very much in the Slovenian spirit. I adapted the recipe slightly and served it as part of my Week 31 Dinner.  Since then, it had become one of our favorites.

The prep is easy.  Boneless chicken is pounded thin and then brushed with a simple paste of oil, smoked paprika and seasoned salt.  Lots of it.

The Shiksa in the Kitchen, whose version of the dish first inspired me, cautions that it is important to not skimp on the salt. Don't worry, she says, the finished dish won't taste too salty.

By my old standards, she was right. But that was then and this is now, as the old cliché goes.  The salt had to go.

I wasn't sure this particular dish could survive without the salt.  I wasn't  too worried about the change in taste.  But I was concerned that the salt might be an essential component of the paste. It provided texture that the powdery paprika by itself did not.  I suspected it might play a role in tenderizing the chicken or sealing in the juice.

But it was worth a chance.  So I made the dish with the easiest possible substitution: A commercially prepared no-salt seasoning mix.

I am not a big believer in pre-mixed seasoning blends.  We rarely use them.  But I happened to have one on hand: Mrs. Dash salt-free garlic and herb blend.  So that's what I used.

The chicken cooked beautifully on the grill.  We sliced it and arranged it on a platter.   My husband had prepared two salt-free side dishes: a mixed green salad and kasha with mushrooms.

As always, the chicken was moist and delicious.  Everything was low-sodium Slovenian. Or at least Slovenian-inspired.

Whatever you call it, we enjoyed another LoSoSlo feast! 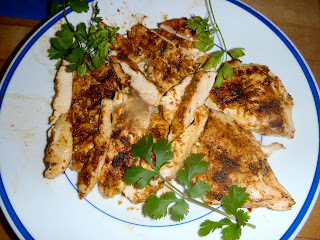 Place chicken breasts between 2 layers of plastic wrap. Pound with the side of a sturdy plate (or, if you have one, a meat mallet) to flatten into a thin, even layer. Mix the paprika, oil, and no-salt seasoning mix into a paste. Rub into both sides of chicken. Refrigerate for a half hour.

Grill, turning when browned on one side.  (Or use a broiler.) When done, remove to a platter. Let cool slightly. Slice into strips and serve.

A hamburger on a bun, the all-American fast food?  Or how about the Balkan contender, cevapcici with flatbread?  What should you choose, if you are watching your sodium intake?

The raw materials are the same.  Ground meat and white flour.  Both are relatively inoffensive, salt-wise.

Plain ground meat (whatever the source) does have naturally occurring sodium, but not much: 60-75 mg in a quarter pound, before cooking.  Whatever the problems with meat consumption (and there are many), salt is not one of them.

Flour has negligible sodium. But bread is usually made with added salt, so it can add up. The typical hamburger bun or a medium pita both contain 200+ mg of sodium.  The count drops to almost 0, if you can find commercially made salt-free pita, or if you follow my salt-free lepinja recipe.

In theory, a simple meal of grilled meat and plain bread doesn't have to be salt-laden.  But the reality is different.

First, a reminder: The recommended daily sodium limits are no more than 2300 mg a day. Most adults should aim for 1500 mg.  To be considered low sodium, a meal should be under 450 mg.

Nutritional profiles for fast foods are easy to find.  McDonald's is particularly obliging. They spell it all out here.

It is pretty shocking.

A McDonald's Big Mac contains 970 mg of sodium.  A large order of fries is 350 mg.  That is practically your entire daily salt quota in a single meal.  What if you skip the fries and have a small side salad? That's just 10 mg of sodium.  Unless you add a packet of low calorie balsamic vinaigrette dressing, which adds an astonishing 470 mg of sodium.

Considering a Big Mac alternative?  There are 1490 mg of sodium in a chicken-bacon wrap or in a bacon, egg and cheese bagel. (Please note: McDonald's is no worse than most other popular fast food chains.  If nothing else, they are transparent.)

So where does all the sodium sneak in?

Salt is often added to the ground meat mixture before cooking, whether the end product is a burger or cevapcici.  When you do the cooking yourself, it is easy enough to leave it out.  And be sure to skip the baking soda, if you are aiming for low sodium cevapcici.

The real difference between the American and the Balkan fast food meal?  It's in the add-ons.   The accompaniments and the side dishes.

What goes with cevapcici, besides flatbread?  The little sausages are traditionally served with ajvar, a red pepper relish, either homemade or the commercial variety.  Along with that, there is kajmak, a sort of clotted cream that is hard to find in the United States. Labne or Greek yogurt make good substitutes.  Grilled onions and peppers, along with tart raw vegetable salads, will often round out the meal.

But consider the American hamburger.  It  arrives with a double helping of starch, a bun and salty French fries.  Then there are the high sodium garnishes: a slice of processed cheese, dill pickle slices, catsup, and perhaps other "special sauces."  If there is coleslaw or a green salad, it is usually saturated with a high sodium dressing.

The Balkan meal wins, hands down.  It is lower in sodium.  Probably lower in fat and calories.  More flavorful.  And it is real food!

To inspire you, below are some sodium numbers, with the preferred choices in bold.

Na Zdravje!  To your health!