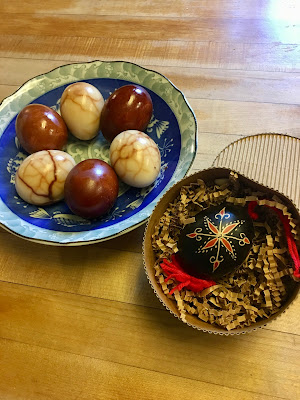 Just in Time for Easter: No-Knead Artisan-Style Potica (+ dairy-free, with an apricot twist) 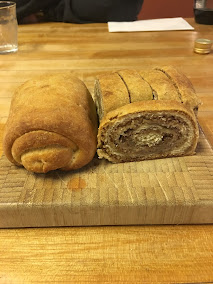 Just in time for Easter, here it is: The long overdue recipe for the new potica variant I baked and froze in December, in anticipation of the out-of-town Christmas gathering that never happened.

For the past five years, I have supplemented the annual family Christmas potica with a dairy-free alternative. This year was no exception. But the bigger news is that I also figured out a way to successfully apply the no-knead "Artisan Bread in Five" approach to this traditional holiday dish. 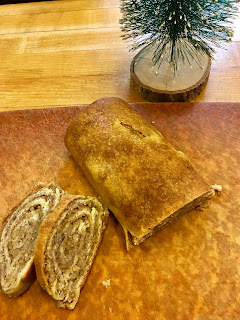 I had tried once before to adapt my standard potica dough (which already calls for overnight refrigeration)  by adding the initial two hour rise at room temperature, as the artisan approach specifies. Unfortunately, that extra step seemed to exhaust the yeast, perhaps because my dough is so dairy- rich.

So this time, I decided go straight to the source. I found a number of variants of brioche dough in the large collection of cookbooks and websites devoted to this popular approach to yeast breads. The most promising was a relatively light brioche dough from Healthy Bread in Five Minutes a Day. Authors Hertzberg and François suggest using it to make a rolled pastry bread with an apple-nut filling they call Apple Strudel Bread (which sounds very potica-like!)

I used their brioche recipe as a foundation, with some significant adaptations: I skipped the whole grains in favor of all-purpose flour, and I used sugar rather than honey. I ended up using a slightly higher proportion of eggs, since I made a half recipe. As you will see in the recipe below, the dairy substitutes I used happened to be coconut-based.

In keeping with my usual practice, I added a little twist to the filling. After drizzling honey on the walnut-sugar layer, I added some dollops of apricot jam.

For whatever reason, this combination was a winner. Although the dough was slightly less rich than the family version, the end product was much the same. It tasted delicious--and it was better the next day. And better still after freezing. In some respects, it was even superior to the traditional batch this year. And it was definitely easier, since no kneading was required!

\
No-Knead Artisan-Style Potica (the dairy-free version)
Dough
3 1/2 cups all purpose flour
2 1/4 teaspoons yeast
1/2 teaspoon salt
1 cup plus 2 tablespoons coconut cream, lukewarm
6 tablespoons coconut-based vegan spread, melted and cooled
6 tablespoons sugar
3 large eggs
For Filling
3+ cups finely ground walnuts, combined with:
1/2 cup sugar
1 1/2 teaspoons cinnamon
4 tablespoons melted non-dairy vegan spread
4 tablespoons honey, or to taste
(optional: apricot jam)
(Note: For more background on the Artisan Bread in Five Minutes a Day approach, go here.  And for my master recipe, see Potica, A Step-by-Step Guide to Slovenian Nut Roll.)
Combine flour, yeast, and salt in a large bowl or plastic dough container and whisk together. In separate bowl, beat the remaining ingredients together and stir into the dry ingredients, mixing well with a spoon. Cover loosely and let rest for 2 hours and then refrigerate for at least 2 hours, preferably overnight.
Remove dough from fridge, divide in two parts, and form each into a ball. Refrigerate the one you are not using. Roll first portion out thinly into a 15-26 inch rectangle. Spread with melted non-dairy spread. Sprinkle with half the nut mixture. Drizzle with honey. Top with dollops of apricot jam, if desired. Roll up from wide end and seal. Repeat with second portion of dough. Let loaves rise for 90 minutes. Bake at 350 degrees for 30 minutes. Let cool well before slicing. Makes 2 loaves.
Posted by Blair K. at 12:34 PM No comments:

Traditional Potica for Pust (with a few twists!) 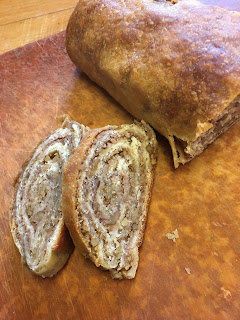 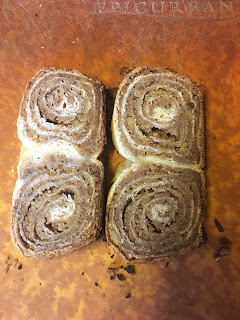 I felt fortunate indeed to attend not one but two in-person Pust celebrations this year. The first one was a small at-home gathering I hosted for a couple of friends (and spouses) from Slovenian class. My contribution was the Mardi Gras King Cake "pustica" hybrid I had created for my husband's recent birthday.

The second was a large outdoor gathering sponsored by the Slovenian Hall in San Francisco. It was a festive affair at a lovely private home in the Oakland Hills, with live music (we were happy to join in) and plenty of food. For that one I contributed the last of the Christmas potica I had stored in the freezer, after the planned trip to gather with family in New York never materialized, thanks to Covid.

In December, I had baked two varieties of my mostly-traditional holiday potica. My standard walnut-honey potica followed the family recipe with just one small change. I used my KitchenAid stand mixer to make the dough and had not been completely happy with the results. The dough rose even less than usual and the layers seemed a little dense and damp after baking. But the potica seemed to have improved after freezing. I was particularly happy with the way the final loaf (on the left in the top photo, and also below) had turned out. On a whim, I had decided to bake the last loaf in the batch as a double roll in a bread pan, instead of doing my usual free form single roll. 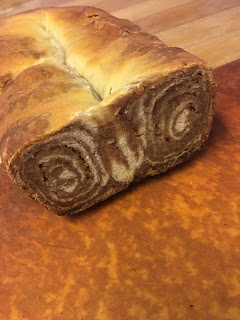 The second version  (in the top right photo) was definitely an innovation. It was my first successful attempt at using the artisan-style method of cold bulk fermentation to make potica. It was dairy-free. And I added a little apricot to the walnut filling. Recipe to follow!