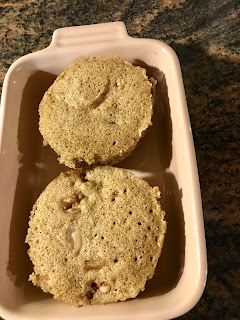 This is the longest I have ever gone without posting in this blog. Five months since the last one.
So what's the problem? General pandemic malaise? A dearth of cooking adventures? Not at all.
I have been doing plenty of cooking, both old favorites and new discoveries. I bake almost all our bread. There is always homemade gelato or frozen yogurt in the freezer. I have even drafted a half dozen posts in these last months that are waiting to be published.
I have hesitated because very few of my new recipes qualify as strictly Slovenian. I could argue that they are in the Slovenian spirit. But maybe I'll forget about the excuses and just start sharing some recipes again, beginning with this one.
This is an update on a last-minute Rosh Hashanah sweet I developed two years ago, in the fall of 2019. I called it Honey Cake for the Harried. At the time, I was feeling pressured because we had just gotten through a power outage and were preparing for a trip to Slovenia. (Remember those pre-pandemic days?) I love traditional Jewish honey cake but I needed to find a shortcut.
So I decided to take a chance on that microwave mug cake craze that until then I had dismissed as a silly fad. I added some traditional touches to a very plain honey-flavored mug cake recipe and was pleasantly surprised at the result. A little pale and mild, but a decent substitute for the real thing.
This year I came back to that recipe and and tinkered a little more: The biggest change: Instead of white flour I used rye, which is very much within the Jewish tradition. (And also pretty Slovenian, I would argue!) I also upped the spices and added some walnuts on top.
The result:  Even better than last year.The flavor and color were richer and deeper, thanks to the rye flour. And the walnuts added a nice traditional touch.
Next up:  Another rye recipe. And this one is fully Slovenian! 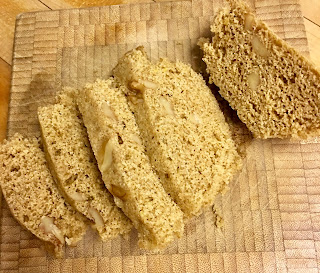 Quick Little Rye Honey Cakes (made in the microwave)
2 tablespoons butter
2 tablespoons honey
1 large egg1/4 teaspoon vanilla3 tablespoons dark brown sugar5 tablespoons rye flour1/4 teaspoon baking powder1/4 teaspoon each cinnamon and ginger2 pinches cloves or allspicepinch of salt
a few broken walnuts for top
In a small dish, melt butter in microwave. Add honey and beat with a fork. Add egg, brown sugar, and vanilla and mix well. Scoop flour into a measuring cup and mix in baking powder and spices. Add dry ingredients to the wet ingredients and mix until smooth.Pour batter into two lightly greased ramekins and sprinkle a few walnut pieces on top. Cover with parchment paper. Microwave for 90 seconds and check cakes. If not yet firm, microwave for 10 seconds more and check again. Repeat if necessary. Let cool on a rack and unmold.
Posted by Blair K. at 1:53 PM No comments: