Slovenian Dinner Week 3: A Tasty Roux and a Buckwheat Volcano 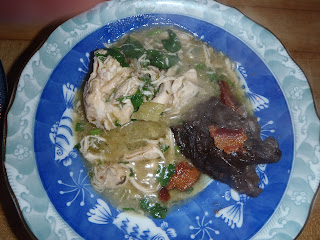 After a couple of successful Slovenian meals, I had begun to feel confident. True, I had started out with the familiar.  Stuffed cabbage.  Jelly rolls, otherwise known as palačinke. Then, that little side trip into šmoren.  So far, so good.

It was time to branch out into less familiar territory.

Except it wasn't as unfamiliar as I thought, because it revolved around a core element in a cuisine I had come to know well.  Roux.  The foundation of Louisiana French cooking.  I'd been immersed in that culture since I fell in love with the Cajun accordion, twenty years earlier.

Roux is simple enough:  Flour browned in fat, used as a base for thickening sauce or gravy. But a Louisiana roux is something else.  Cooked long and slow, with constant stirring, it can take an hour until it turns the requisite dark brown.  Roux gives that special rich zest to Cajun and Creole favorites like gumbo, along with so many other dishes.

There is even a popular Cajun cookbook: Who's Your Mama, Are You Catholic and Can You Make a Roux?

But it wasn't just the Cajuns and Creoles of Louisiana who had figured out the magical powers of roux.  My Slovenian forbears were also in on the secret. Who knew?

Well, my mother knew, as it turned out.

She had started to talk about a veal soup her mother used to make.  "Aye-macht" is what she thought it was called.  When I started to browse through my vintage cookbooks, I came across something called "ajmoht."  It seemed to be a cross between a soup and a stew.  The key element was something called ajprem, or roux.  It turned up everywhere.  Stews. Vegetable dishes. Cucumber gravy. There was even a soup that seemed to be nothing but water and roux.

So I found a dish that looked easy.  A sort of chicken ragout made with roux.  Maybe a very simple version of the Cajun chicken and sausage gumbo my husband had learned to make so well.

To accompany it, I decided to try something that was supposed to be a uniquely Slovenian dish.  It was a sort of buckwheat dumpling. Or maybe it a kind of polenta.  The preparation seemed a little. . . unusual.  So was the name, at least if you don't speak Slovenian.

Buckwheat volcano would be more like it.  That žganci would turn out to be my biggest challenge so far.