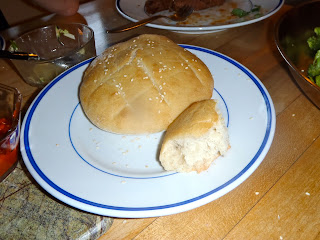 Traditionally, cevapcici are served with a flatbread that resembles a thick sort of pita. It goes by various names, depending on where you are.  Serbian flatbread.  Bosnian bread. Lepinja or lepinje. Somun. Slovenians make a version called pogača.

I had already made an impromptu attempt at Balkan-style flatbread for my first cevapcici meal, early in my year of Slovenian cooking.  I just used part of the dough I'd put together for my grandmother's homemade white bread. The next time around, I resolved to use a more authentic flatbread recipe, which usually involves a simpler yeast dough and multiple risings.  I had found a good, basic recipe on Barbara Rolek's comprehensive Eastern European cooking site.

Now the time had come. But I had a new challenge: I wanted to make the bread without salt, to go along with the cevapcici for my very first Low Sodium Balkan Feast.  So I went back to the recipe I'd found and made a few changes.  For starters, I cut it in half. I skipped the salt and coated both the bowl and dough liberally with olive oil, for a little added moistness and flavor.

It turns out that salt serves two important functions in bread-making.  It adds to the taste. Perhaps more importantly, it enhances the structure of the dough by slowing down the growth of the yeast.  Without salt, bread can over-rise and collapse.  For that reason, some bakers argue that flatbreads and other small, individual breads lend themselves more readily to salt-free makeovers.

Well, as you can see from the photos, the flatbread looked lovely.  It puffed up nicely. (Was it a little too high-rising?) Inside, it had the coarse, uneven texture that is typical of these breads.  The flavor?  Well, there is no getting around it: Plain white bread tastes a little flat without the salt.  But it's not bad.  And it serves as a good foil for the assertive flavors of the rest of a cevapcici feast:  Spicy, charred meat.  Tangy ajvar. Tart greek yogurt.  You don't really miss the salt.

Burger and fries? No thanks. The Balkan equivalent is so much tastier and healthier, with and especially without the salt!  To see how the two compare, go to the next post. 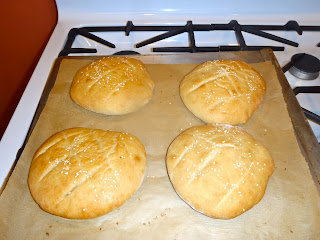 olive oil for bowl
sesame seeds for top of bread

*original recipe calls for 1-1/2 t. salt to be mixed with flour

Put remaining flour in a large bowl.  Add the yeast sponge and enough of the 1 cup water to make a soft dough.  Mix well and place dough in well-oiled large bowl.  Cover and let rise in warm place until doubled.  (This may go faster without salt!)

When dough is doubled, punch it down, remove from bowl, and knead briefly on floured board.  Return dough to oiled bowl, cover and let rise again until doubled.

After the second rising, place dough on floured board, knead briefly, and divide into four balls.  Cover let rest for 10 minutes or a little more.

Flatten or roll each ball into a 1/2 inch thick round. Note that this is thicker than pita. Place each round on baking baking sheet lined parchment paper.  Using the dull side of a knife, make a criss-cross pattern on top of each round.  Sprinkle with sesame seeds.

Bake at 450 degrees until flatbreads start to brown.  Lower oven to 300 degrees and bake for 10-15 minutes more.

Let cool on rack.  Best when warm or freshly made. 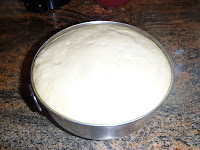 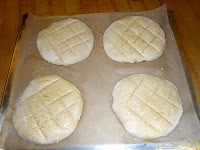 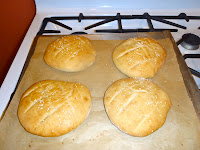