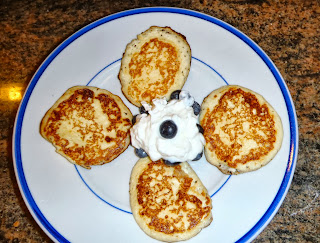 My obsession with curd cheese and farmer cheese was still going strong.

The latest twist: We had just picked up some authentic tvarog at a Russian grocery in San Francisco.  It turned out to be very much like the version made by Belfiore, a small cheese-making company based in Berkeley, my home town.

I knew the perfect way to use that cheese. Pancakes.

A few months earlier, my Cajun band had a gig at a local farmers' market. During the break, I discovered a Russian Jewish vendor with a variety of traditional homemade delicacies for sale. My favorites were the cheese pancakes, or syrniki in Russian. They were unlike any cottage cheese pancakes I had tried before: sweet, thick and substantial. More like cheese patties.

There are many recipes available for pancakes made with cottage cheese or sometimes ricotta. These pancakes have long been a popular high-protein dish for dieters, since they are typically heavy on the cheese and egg, with just a little flour.

But the Russian take on the dish was new to me.  I searched out a number of recipes for cheese pancakes and discovered that many Eastern and Central European groups make them. But not the Slovenians. The closest I could find were boiled cheese dumplings. (Slovenian "cheese pancakes" turned out to be blintzes.)

So I decided to stick to recipes for Russian cheese pancakes.  I ended up with a variation of a recipe I found on an NPR site, which they had adapted from a Russian chef.  I worked out a single serving adaptation.

The NPR recipe is here.

For my version, along with the verdict, read on. 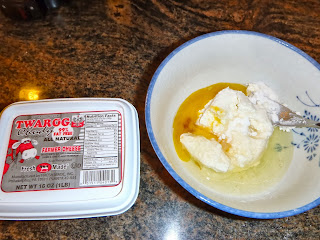 
To make one generous serving:

Mix all the ingredients together.   Heat oil or butter in a skillet.   Drop batter by rounded tablespoons into skillet.  When brown on one side, turn.  Serve with honey or syrup, yogurt, and fresh fruit. 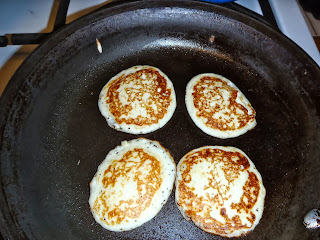 The verdict?  Very tasty.   The recipe made a generous serving, which I managed to finish with no leftovers. I didn't miss the salt at all.

It was not quite what I remembered from the Russian vendor at the farmers' market. I suspect the Russian man used a larger proportion of cheese relative to the egg and flour.

The next time, I'll make a larger recipe and experiment with the proportions.   I may also try my hand at making homemade farmer cheese that duplicates that Russian tang!

Update: A year-and-a-half later, I finally perfected this dish--and I discovered a recipe for syrniki in one of my vintage Slovenian cookbooks! To read about it, go here.