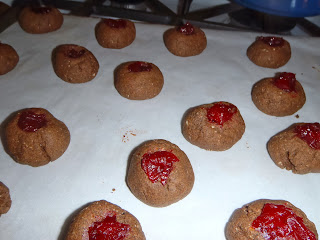 After my success with domači prijatelj, I wanted to add another Slovenian cookie to my holiday dessert plate. So I returned to the Slovenian cooking site Kulinarika and discovered an intriguing recipe for ajdovčki  ("little buckwheats"), a rich butter-nut ball that included buckwheat flour and cocoa.

I don't know whether this is a traditional cookie, but in recent years it seems to have become quite the thing among Slovenian food bloggers. I found a particularly nice bilingual version on this blog. The blogger had provided a fitting English name, jam thumbprint cookies.  She even used a cranberry jam filling.  That caught my eye, because I still had some tart homemade cranberry compote left over from Thanksgiving.

I did hesitate when I read the part about about making holes in the cookies with the handle of a wooden spoon. The last time I tried that, when I attempted a very odd buckwheat dumpling called žganci, the result was a disaster.

I made a few changes to the recipe: almonds instead of walnuts, a little more spice, and cognac instead of rum.  To save time, I bought fresh almond meal at the produce store around the corner. 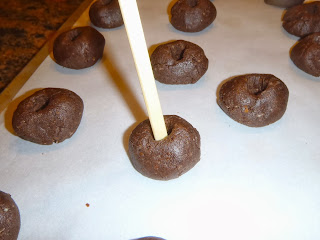 Mix the dry ingredients together in a large bowl. Rub in butter with your fingertips. Mixture will be crumbly. Beat egg yolk and cognac together and sprinkle over mixture. Work with hands until mixture holds together.  If necessary, add a little more cognac or water until you have a stiff, dense dough.

Form dough into small balls, about the size of a walnut.  Place on a parchment-lined cookie sheet. Make a depression in each ball with the handle of a wooden spoon, a chopstick, or your finger.

Bake at 330 degrees for 20 minutes.  Remove from oven.  Enlarge hole with your finger and add a bit of jam.  Reduce temperature to 300 degrees and bake for 5 more minutes. Let cool.

Many recipes suggest a chocolate frosting, but that seemed liked overkill to me. I added a light dusting of powdered sugar before serving. 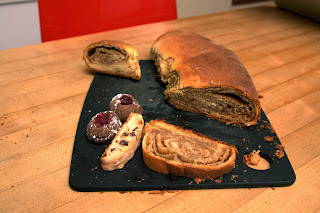 I had high hopes when I tasted the raw dough.  (Yes, I know this is a reckless move! I do not recommend eating raw egg.)  That compact brown dough looked and tasted just like the uncooked rum balls we often make for Christmas.  For those who don't know: Rum balls are a heavenly mix of ground walnuts, vanilla wafer crumbs, sugar, cocoa, and plenty of  rum.  This dough tasted very much the same. 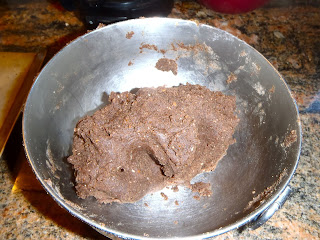 The cookies looked pretty when I took them out of the oven. The first sign of trouble came when one of them crumbled in my fingers when I picked it up.  Naturally, I tasted it. It was dry and not very sweet.  With baking, that buckwheat flavor seemed to have become more pronounced.

I gave the cookies a good sprinkle of powdered sugar and let them cool.  The extra sweetening helped a little, but it still seemed that something was missing.  The cookies tasted almost aggressively bland.

In fairness, I made a number of departures from the original recipe.  My substitution of almond meal for walnuts probably accounted for the increased dryness.  Another possibility: my conversion from the original metric measures might have been a little off.  I baked the cookies at an initial  temperature that was a little too high, and I forgot to turn down the oven for the last five minutes in the oven.  I also chose to skip the frosting that many recipes suggest. (From the discussion on the Kulinarika cooking site, it appears that some of the Slovenian cooks also had problems when they made significant changes in the original recipe.)

I am tempted to say that these are cookies that only a Slovenian could love.  But my husband liked them.  And the flavor and texture did improve with age. They are definitely for buckwheat fans.

If I were to try these again, I would follow the original recipe exactly, including those "by weight" metric measures. I would also use an actual sweet jam, and more of it.  And probably a drizzle of white icing, or at least a serious roll in a dish of powdered sugar.

Update:  I made the new improved version for my Slovenian language class.  They were a success! To see the recipe, go here.