I posted the recipe for Murray's Famous Chicken-Beef Kreplach almost two years ago. Although I incorporated some of my father-in-law's seasoning suggestions when I made žlikrofi, the Slovenian version of the dish, I had never actually followed his complete recipe.

Murray's recipe is labor intensive. It begins with poaching the chicken and stewing the beef. No shortcuts in this recipe, so I would have to devote an entire day to making kreplach.

I needed something else: a hand-cranked meat grinder, to replace the one my mother had passed along to me. She had used it to prepare the meat filling for her own version of kreplach, which was probably based on the Slovenian žlikrofi my grandmother made. Sadly, I had lost track of that old treasure. So I was on the lookout for a new one. I did find one old meat grinder at a fancy antique store, but I balked at the thirty-five dollar price tag.

Finally, about a month ago, I wandered into a yard sale down the block. And there it was: A hand-cranked meat grinder. Old, a little rusty, but with all the parts. A bargain at six dollars.

The time for Murray's Kreplach had arrived. 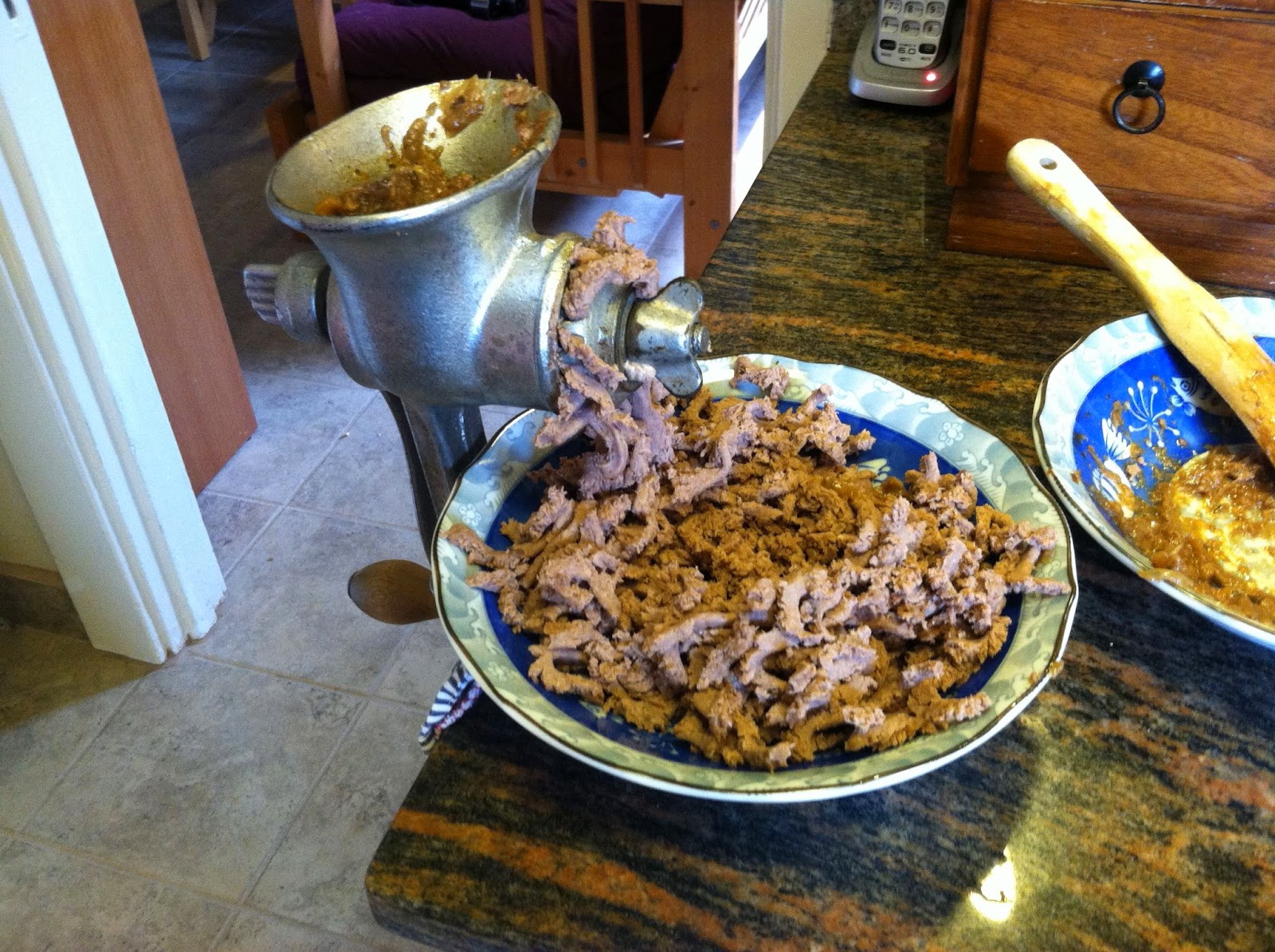 I made just a few changes in Murray's recipe. The biggest one? No added salt. To compensate, I increased the other seasonings. I also used oil instead of chicken fat. Since the original recipe is quite large, I cut the quantities in half.

The detailed recipe follows, along with step-by-step photos.

But first, let's cut to the chase:  Was it worth it?

The answer: Yes, without question. I had no idea how good this would be. Even without the salt, the meat filling was rich and full of flavor.  It had the deep, earthy tang of chopped liver. I could swear someone had slipped in some schmaltz (chicken fat) when I wasn't looking.

The secret is in the step that Murray calls "making potted beef." Plenty of well-browned onion and a generous hand with the flour and fat leaves you with a rich, flavorful gravy that gets added to the meat filling at the end. Do not skip this step!

Despite some healthy changes (no salt, oil instead of chicken fat) this is not diet food.  But kreplach are meant to be a ceremonial dish, filled with love and family and memories of the past.  Murray's mother Rose Tabak (who was born in Poland) made them every Rosh Hashanah and distributed them to her children and grandchildren as a New Year's gift.  Once or twice a year, I figure we can follow her example and do it up right. 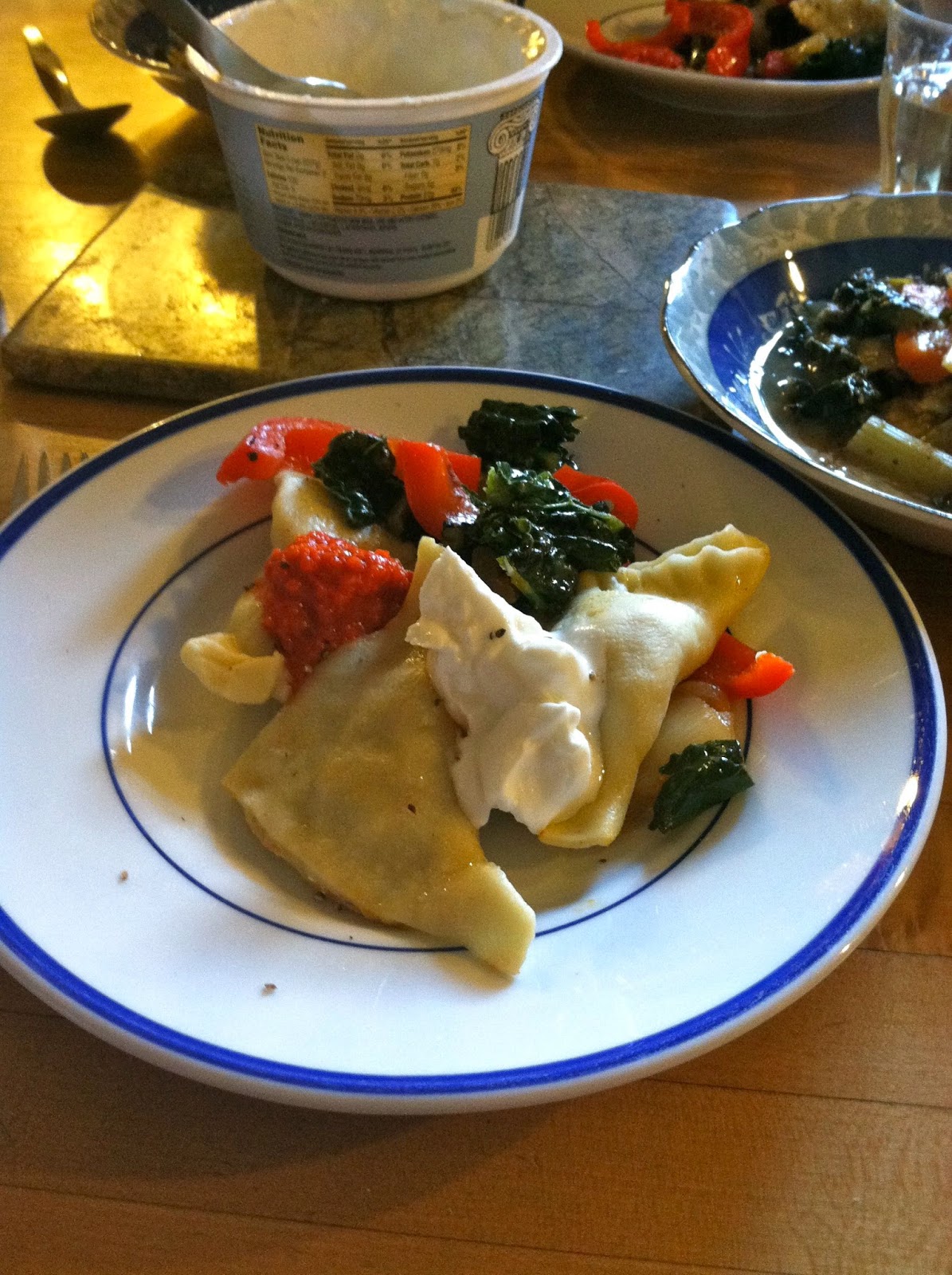 Poach chicken breasts in water seasoned with pepper and a little minced garlic. I added some onion and a bay leaf. Drain and chill. (Save the liquid for soup!)

Murray refers to this next step as "making potted beef." Cut beef in cubes, coat with flour, and brown on all sides in oil or chicken fat. Remove beef from pan. Using the same pan, brown the onion, adding more oil or fat if needed. When onions are well browned, add beef back to pan. Add 1/2 inch of water, along with pepper, paprika, parsley, garlic and salt-free seasoning mix or (if desired) salt.  Cover and simmer on low heat, adding more liquid if needed, for about an hour, or until beef is tender. Remove from pan and chill. Be sure to save the onion-sauce mix that remains in the pan.

Cut the chilled chicken into chunks. Use a meat grinder (or, if you must, a food processor) to chop the chicken finely. Set aside in a bowl.

Place the chilled beef cubes into meat grinder (or food processor) and chop or grind finely.

Combine chopped beef, chopped chicken and the onion-sauce mixture that is left over from potting the beef. If filling doesn't hold together, you can add additional oil or breadcrumbs, but I didn't need either of those. The filling should be strongly flavored, with a texture that is something like a raw meatball mixture, according to Murray. I found to be more like a firm spread that reminded me of chopped liver, in both the texture and the rich, deep flavor. Since the meat is already cooked, you are free to taste and adjust the seasonings.  Because my version was salt-free, I increased the other seasonings.

The original recipe suggests using a food processor to mix the dough and a pasta machine for rolling it out.  But I opted for the old-fashioned approach: mixing and rolling by hand.

For a reminder on how to make egg noodle dough, go here.

Roll the dough into a thin square that is roughly 18 x 18 inches. Cut into three-inch squares. Put a heaping teaspoon of filling in the center of each square. To shape, I used the simple, traditional approach I learned from my mother:  Fold the square into a triangle and crimp the edges with a fork. (Murray's original recipe, as well as many Slovenian recipes, involve a more complex tortellini shape.)

I ended up with 32 kreplach. Bring a large pot of water to boil and drop in kreplach. When they rise to the top, reduce heat and simmer for about 20 minutes. Drain. Coat with a little oil and keep warm.

There are many ways to serve kreplach. In chicken broth. Plain, topped with a little parsley and browned onions. Garnished with ajvar and Greek yogurt.  Even fried. 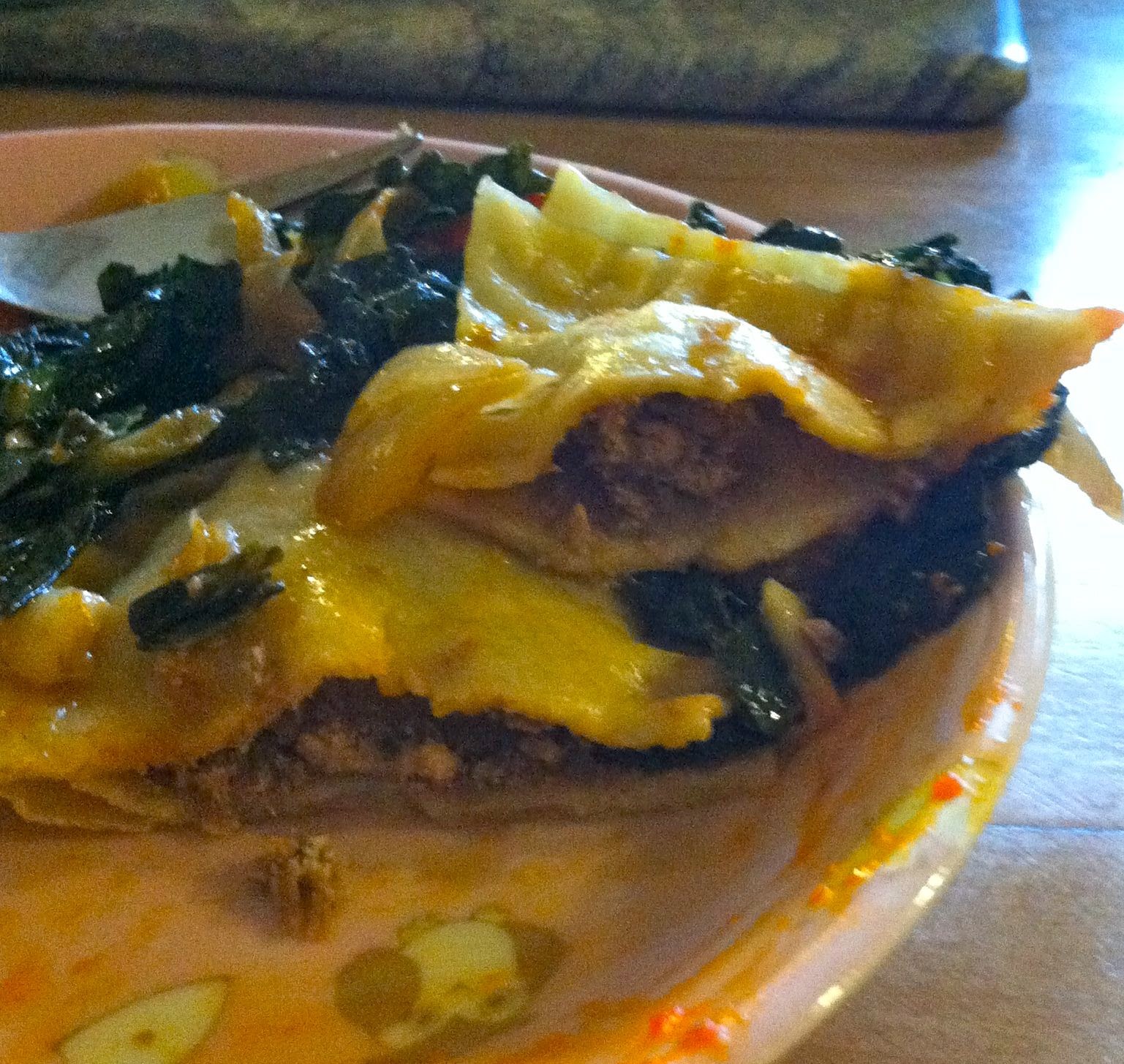