New Potica Horizons, A Retrospective for 2014 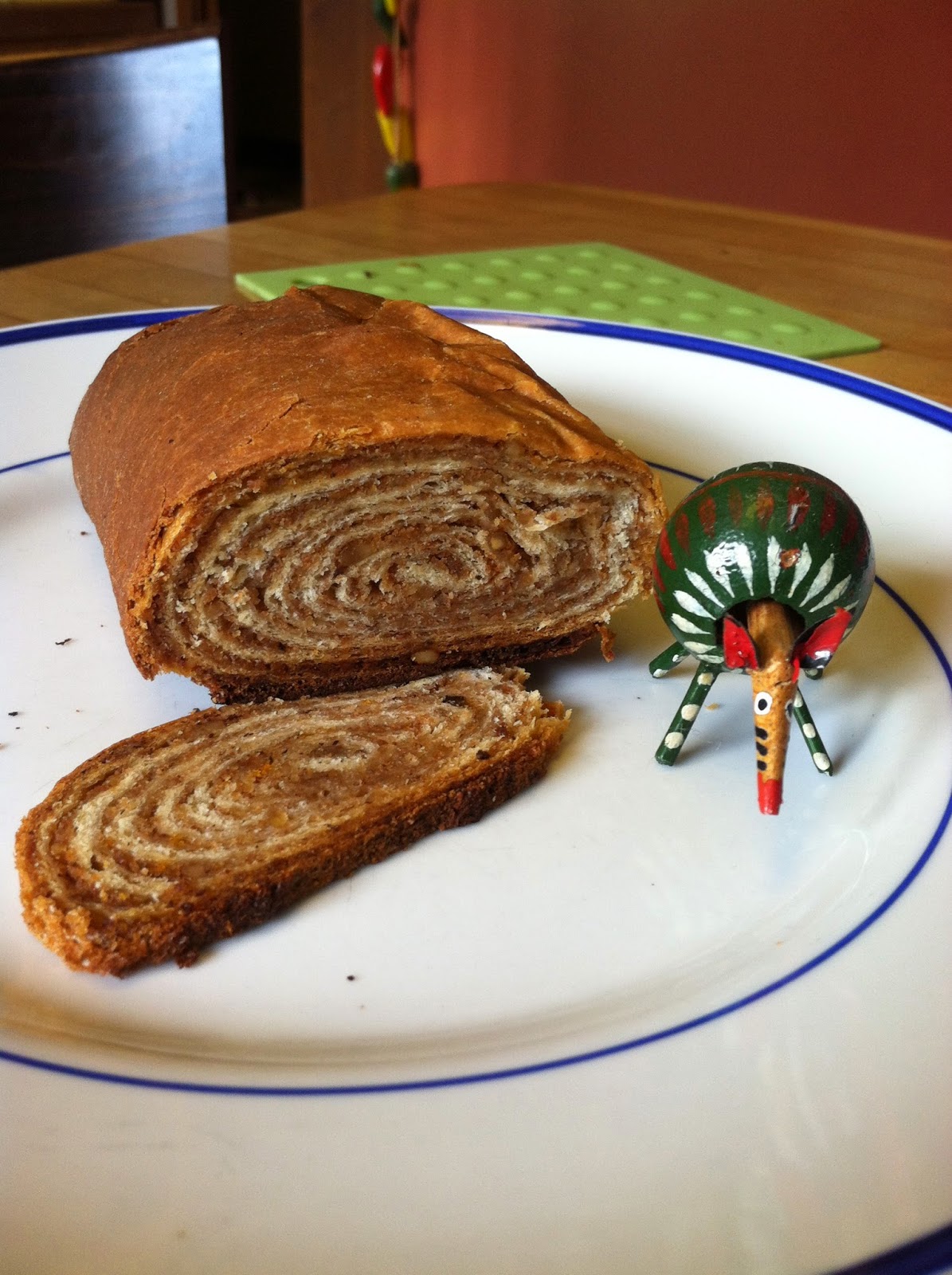 As another year of Slovenian cooking comes to a close, I have been thinking about potica.

As usual, I will be making our traditional family recipe for the holidays. My expanded, step-by-step guide seems to be getting a particularly large number of visits this year. It remains the cornerstone of my own approach to this challenging Slovenian delicacy.

But my potica horizons have been expanding this year, for a few reasons:  My growing collection of cookbooks, both American and Slovenian. My trip to Slovenia in the summer. And the spirited food-related discussions on a wonderful Facebook Slovenian genealogy group I joined last year.

I have finally realized something important: My beloved family potica style is not an approach that everyone favors. It is certainly not the the standard in Slovenia, where potica is often closer to bread than pastry. Paper-thin spirals of dough, sometimes pulled like strudel rather than rolled, seem to be a peculiarly American evolution, fueled by a certain competitive baking spirit among the women. My family's version of potica also appears to be favored in the ethnic communities of Northern Minnesota's Iron Range, where my own great-grandparents first settled, and where my grandmother was born.

(An aside: In the early days of this blog, I used to write mostly about genealogy. See the "Family History" heading at the top of the page, if you would like to read some non-food posts:-) And if you are on Facebook, do consider joining our Slovenian Genealogy group!)

I have included some photos below, where you can follow my evolving potica style. I have been striving to have thinner, more even layers, in order to come closer to the standard set by my mother and my grandma. But the photos from the Slovenian Hall in San Francisco and the Ljubljana Farmer's Market show a potica with thicker layers and fewer spirals.

The moral: There is no gold standard. Most of us favor the potica we grew up with. That is probably as it should be.

I have also been reminded of a few important baking tips, regardless of the style of potica you hope to make. Most important:  The yeast dough (at least in most recipes) is rich, soft, and sticky. Don't knead in too much flour!  And if you make a nut filling (which remains most popular, in Slovenia and America) the nuts need to be finely ground. A food processor is a poor substitute, I have learned, for the old-fashioned hand grinder I bought last year.

I have learned a few new tricks, thanks mostly to the discussions in that Facebook genealogy group. To clean out the nut grinder, you can follow up with a few graham crackers, which can then be added to the filling. (As you'll see from the photo below, I used leftover Halloween Bunny Grahams!) Another idea I tried this year: after rolling up the potica, I cut off the doughy ends and shaped them into individual rolls. Finally, if you want to imitate the more elaborate pattern of some of the commercial bakeries (as in the photo below) simply coil a thin potica roll once or twice around itself in the baking pan.


I continue my cautious experiments with filling. The foundation is still my family's uncooked honey-nut filling. I most often stick with tradition and use walnuts, although I sometimes substitute pecans or almonds. I have often wondered why most nut fillings are pre-cooked and recently read a possible explanation from one of my online genealogy friends: Some cooks believe that the slightly bitter taste of walnuts (which evidently bothers some folks) can be reduced pre-cooking, or at least an initial soak in hot milk.

My family has never used raisins, but they seem to enjoy the sprinkle of dried cranberries I started to add a couple of years ago.  Everyone but my mother likes my experiments with poppy seed and chocolate fillings. In the coming year, I will continue to explore some of the more intriguing variations I have been learning about. I might even try a peanut butter crumb filling, a uniquely American twist that some people swear by.

I have also learned that potica can survive an oven malfunction and a charred bottom crust. Just slice it off before serving! (I don't recommend this, however. Watch your oven and don't overcrowd it!)

From my kitchen to yours: Happy Holidays! Vesel Božič!