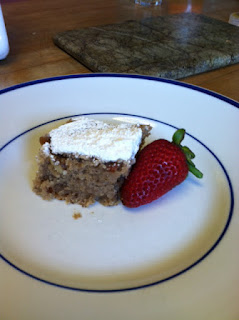 Our son was visiting from Kosovo, so I decided to make an encore version of the delicious meal I had prepared from the Albanian-American cookbook he had sent me for my birthday in January.

The main dish, a beef and eggplant moussaka, had been a standout, so I was eager to serve it again.The dessert, on the other hand, was more of an experiment. The women of St. Mary's Albanian Orthodox Church in Massachusetts (the authors of the Albanian Cookbook) called it Authentic Albanian Cake, but I had my doubts. It was definitely a Mystery Cake.

The recipe had seemed straightforward: a simple, one-bowl affair, with ingredients that can be found in anyone's kitchen. In fact, it reminded me of a frugal American cake that has gone by various names over the years: Depression cake, eggless-butterless-milkless cake, or (my favorite) wacky cake. But this Albanian version turned out to be full of surprises.

For starters, the batter was so liquid that it bubbled in the pan. After baking and cooling, the dessert ended up in layers, with a dense, pasty filling sandwiched in between two crust-like layers. The flavor was mild and inoffensive. Perhaps this was meant to be a sort of poor man's baklava. This dessert was odd and hard to categorize, at least by American standards. I wondered what my son would think of it.


For this second attempt, I made a couple of small changes to pep up the flavor. A touch more sugar--and brown instead of white. More cinnamon, plus a little vanilla. A mix of walnuts and almonds.There were also two unplanned changes: Italian 00 flour (often used to make pasta) because we were out of all purpose flour. And extra baking powder, when I discovered that the three cans in my pantry were all a little (or a lot) past the expiration date.

This time, the result was completely different. Unbaked, the batter was thicker. After baking, it had a familiar texture: uniformly light but moist. Very much like an easy, old-fashioned American spice cake. Or even a "wacky cake," although the Albanian version is lighter on the sugar and heavier on the oil.


I strongly suspect that the unusual texture of the first cake was the result of two mistakes: Forgetting to reduce the water when I cut the original recipe in half, and using baking powder that was long past the expiration date. The second cake was lighter because the baking powder was more potent--and perhaps because of the touch of acidity introduced by the brown sugar. The American approach to this kind of cake always includes a bit of vinegar, so it makes sense.

Now that I have made the cake the proper way, I still wonder: Is this really a traditional Albanian dessert, or is it simply an adaptation of an American standard? The jury is out on that one. I'm hoping one of my readers in Kosovo or Albania will weigh in.

Whatever its origins, this is an easy and pleasant cake. It is a perfect dessert when time is short and you need to work with simple ingredients that are already at hand. It is also a good, basic foundation that can be enhanced with more spice, more nuts, and additions like dried fruit or coconut.

Update: In doing some additional research on America's long-popular wacky cakes, I've made a few interesting discoveries that offer modest support for the possibility that this really is a traditional Albanian sweet.


Even though this frugal American cake is typically associated with the Great Depression or the Second World War, historians note that it dates back to the early 1900s, if not earlier. I also discovered a fascinating new name variant in a few places, like this in this typical recipe for a white wacky cake. According to some sources, it's also known as Patrushka cake, which offers more than a hint of Eastern European origins.

Authentic Albanian Cake (with a strong resemblance to Wacky Cake!)

(For the original version in the cookbook see my previous post)

Combine flour, cinnamon and baking powder together in a large bowl and set aside. In a medium bowl, beat oil, sugar and vanilla together until thick. Beat in water. Stir this liquid mixture into the dry ingredients. Fold in nuts.

Pour batter into an ungreased (or paper-lined) 8 x 11 inch pan. Bake at 350 degrees for 40-45 minutes or until golden brown. When still warm, sprinkle with confectioners sugar. Cut into squares to serve.

(Note: A much simpler mixing approach should also work. The original Albanian recipe calls for mixing everything together in a single bowl, in no particular order. American wacky cakes are often mixed directly in an ungreased baking pan.)