"Grade A" Potato Salad: An Exercise in Translation and Cooking 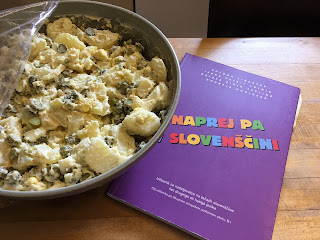 This is a "by the book" recipe. But not the kind of book you'd expect.

I discovered it in Naprej pa v slovenščini, the new textbook we have been using in this year's language class at the Slovenian Hall in San Francisco.

According to the textbook authors, this recipe originally appeared on a Slovenian culinary portal (perhaps Kulinarika.net) and includes commentary from the website users. One Slovenian reader noted that even though the recipe seemed similar to a “French salad” (because of the mayonnaise and mustard?) it was still very good and deserved a clear “petica”—a 5, which means a grade of A in the Slovenian marking system.

After preparing the recipe twice, I agree. As one of the website users commented, it is “njami njami" (yummy) :-) The salad strikes me as a hybrid. Perhaps not the traditional Slovenian-style potato salad with unadorned oil-and-vinegar dressing, but definitely not the heavy, sweet mayonnaise version that many Americans serve.

The original Slovene recipe is below. It is followed by my English translation and measurement conversions, along with a few other thoughts about this "Grade A" potato salad recipe. 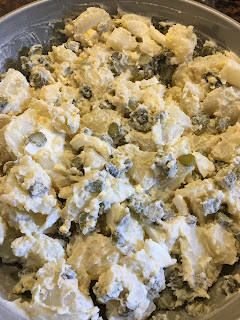 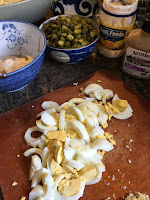 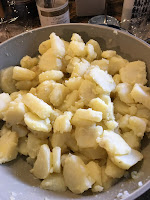 “Grade A” Potato Salad (my translation)

Cook whole potatoes and when still hot peel and slice into a salad bowl. Salt, add oil and mix. To cooled potatoes, add finely chopped pickles, pepper, mustard, mayonnaise, sliced eggs and pressed or chopped garlic and vinegar to taste. Mix all together and serve as a side dish to fish or meat.

Like so many traditional recipes, this one assumes that the reader already knows how to cook. Not everything is spelled out. (Obviously, those eggs need to be hard-cooked before slicing!) Quantities of oil, vinegar, salt and pepper are unspecified and must be adjusted to taste, especially after the salad has been resting in the refrigerator for some time and the dressing has been absorbed.

For a little more detail about what I did: I used medium-sized Yukon Gold potatoes, olive oil, unfiltered apple cider vinegar, Dijon mustard, and French cornichon pickles. The first time around, I left the potatoes unpeeled and made no attempt to measure the oil and vinegar. The second time, when I made a double recipe for the "end-of-year" party of my Slovenian class, I made a few changes. I peeled the potatoes after boiling (as the recipe directs) and decided to measure the initial quantities of oil and vinegar I used. A good "ballpark" figure might be to start with 1/4 cup oil and 1/8 cup vinegar, but you really do need to adjust according to your own preference. (Personally, I like a tart salad.)

I considered using some pumpkin seed oil but was afraid the salad would be oddly green. My husband had the bright idea of drizzling a little pumpkin seed oil on top. We tried that at home and it was a nice touch.