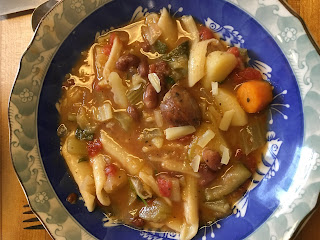 It was late summer, about a month after I had made that tasty jota, when I rediscovered another Slovenian soup/stew.
My husband was feeling at a loss about what to make for dinner. He reported we had some spicy chicken garlic sausage on hand, along with a head of cabbage. And some zucchini that needed to be used soon. It would be easy enough to just make the sausage with cabbage and serve some zucchini on the side, but that didn't seem to inspire him.

"I bet I can figure something out," I offered. I had a feeling there was some Slovenian dish I had made once or twice with those ingredients and started browsing the recipe list on this blog.

And there it was, Slovenian minestrone.

How did I forget how satisfying this simple dish is? 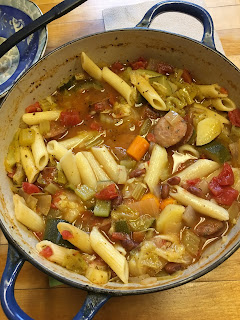 It was one of the dishes I discovered in 2012, my year of Slovenian cooking. I made it again the following year, when I did more research and discovered how many variations there are: With beans and without, with pasta or rice, and a variety of meat choices (including none at all). That second version was even better than the first. But I realized there was nothing fixed about the recipe, especially when it came to the veggie possibilities.

Even working from our more limited pantry, I discovered that we had most of the ingredients I had used that last time. In fact, they had become our pandemic staples: Sausage, usually chicken or turkey versions. Dried beans and canned tomatoes. Pasta. Onions, garlic, cabbage, carrots, and parsley. Luckily, we happened to have a few potatoes this week. But no leeks, peas or celery root, those interesting additions from last time. We did have regular celery--and some zucchini to add. No parsley for a final garnish. But we did have plenty of white wine, for drinking as well as for cooking

I was all set to make the minestrone myself. But then I figured this might be a good time to deputize my husband, since he seemed more in need of a project. So I printed up the recipe from the last time--and was surprised to realize that salt and pepper had been the only seasonings. I suggested he might want to add some marjoram. He agreed, and he also decided to cook the beans with some bay leaves.

As I suspected, this improvised version was delicious. I was reminded once again that beans you cook yourself taste better, although the canned variety is a perfectly acceptable option. Like most soups and stews, the minestrone tasted better on the second and third days.  It was a hearty and sustaining choice as  we headed into our sixth month of sheltering in place. 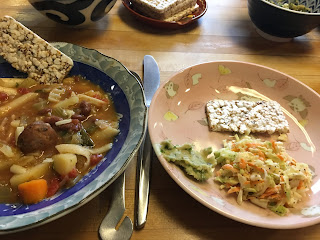 2 tablespoons olive oil
1/2  large onion, chopped
1 large leek, sliced But it works fine to omit!
1-2 large cloves garlic, chopped
1/2 head cabbage (green this time), sliced
1 large carrot, sliced
1 medium potato, unpeeled, cubed
1 celery root, peeled and cubed--or 2-3 stalks of celery, sliced
1 large zucchini, cubed (A nice addition this time!)
1/4 cup fresh parsley, minced (if you have it!)
1 cup chopped tomatoes with juice
10 oz (4 or 5) smoked chicken garlic sausages, sliced
2 quarts water
1 c. peas, frozen or fresh But it works fine to omit!
1/2 cup small dried pasta
1 can borlotti beans 1-1/2 cup cooked red beans, prepared with bay leaves
1-2 teaspoons salt
freshly ground pepper
1 teaspoon marjoram
white wine to taste
shaved parmesan for garnish
parsley for garnish (if you have it!)
If you are using dried beans, prepare them in advance and set aside. Prepare the other vegetables. If you use a leek, be careful to cut and soak the bulb to remove any grit before slicing.
Heat olive oil in a large Dutch oven. Add the onion and garlic and brown. Add leek, cabbage and sausage and brown. Add the remaining vegetables (except for the beans), seasonings, and water. Cover and simmer. Taste and adjust seasoning. Toward the end, add pasta and prepared beans and continue simmering for a half hour. If desired, add some white wine. Serve with grated parmesan cheese and parsley for garnish.