So what is kreplach, a traditional Jewish dumpling, doing in a Slovenian food blog?

If you have read my recent posts about Slovenian zlikrofi, especially here, you already know part of the answer.

The two dishes are so similar that you could easily mistake one for the other. In fact, my mother often referred to her meat-filled dumplings as kreplach. She probably figured it sounded more American than zlikrofi!

There is another reason for sharing this. Murray's Kreplach is also a family recipe. But it's from my husband's side of the family. 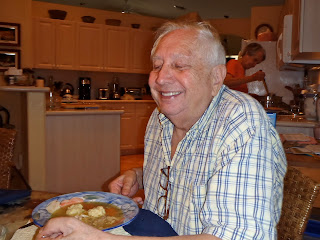 Murray Tabak is my father-in-law. As a boy, he used to watch his Polish-born mother hard at work in the kitchen. He went on to become a fine cook himself. Luckily, he had the foresight to preserve some of his mother's prized dishes. He watched her, asked questions, and made notes. The result was a handful of traditional Jewish recipes. This is one of them. Every fall, Grandma Rose used to make a big batch of kreplach and then deliver them, a couple dozen to each household, to her five children and their families for Rosh Hashanah, the Jewish New Year.

Rose, my husband's grandmother, cooked from memory and feeling. Just like my own grandmother, she lived through hard times and had the knack for doing a lot with very little. Her kreplach, like Slovenian zlikrofi, are labor intensive.

The filling uses two kinds of meat, chicken and beef, each cooked separately and then ground or chopped in a food processor. The shape is also more complicated that my mother's simple wonton triangles. There is a second step here: Pinching two corners of the triangle together, so they resemble tortellini.

During a recent visit, my father-in-law proudly showed us a printed version of his recipe, dubbed Murray's Kreplach, in a 1988 cookbook called "Almost All My Secrets: Recipes from the Bakery." This cookbook, probably self-published, was the creation of Deborah Davidson, who used to own a bakery in New York's Westchester County. The cookbook is out of print, the bakery no longer exists, and Murray moved to Florida and lost touch with the baker-author. So I saw this as one more vintage cookbook that helped preserve a piece of the past.

Except for one small problem. The cookbook got it wrong.

This came to light during a subsequent visit,  just after I had posted the first version of this recipe. When I showed Murray the blog entry, he was pleased and started to read it. Then he took a closer look.

I had the proportions of beef and pork reversed, Murray said. So I went to my original source, the cookbook he'd shown me. She got it wrong too. The filling was supposed to be mostly beef and just a little chicken, in a ratio of about 4:1.

In the recipe below, I have made the correction. I also specify chicken breasts, since Murray's mother used white meat only. And I have substituted fresh herbs for dried.

Murray also agreed with me: The instructions in the cookbook were too detailed. In fact, his observation was a little more pungent: Anyone who needed every step spelled out had no business even attempting such an ambitious recipe!

For the filling, I have simplified the directions even more and put them into my own language.

When it comes to the dough, I offer only brief instructions.

The cookbook version gives detailed directions for using a pasta machine. I no longer own one of those, and I have happily returned to the old-fashioned hand-rolled approach, at least for making noodles and dumplings. If you would like to find instructions for using a pasta machine, I am sure you can.  For a reminder on how to make noodles by hand, you can look back at my zlikrofi recipe.

I have given the ingredients for the dough, to give an idea of the quantities in this very large recipe. Unlike the Slovenian egg noodle dough,  this recipe includes a little oil, but no salt. Oil is supposed to make pasta dough more supple and elastic. I'm not sure how much difference it makes. The Slovenian recipes, and some kreplach recipes, skip the oil.  So it's up to you.

Poach chicken breasts in water seasoned with salt, pepper, and a little minced garlic. Drain. Murray, his mother, and my mother all used hand grinders. If you use a food processor, be careful to chop coarsely. You don't want a paste! Refrigerate.

Murray refers to this next step as "making potted beef." Cut beef in cubes, coat with flour, and brown on all sides. Remove beef from pan. Using the same pan, brown the onion in 2 T. chicken fat. When brown, add beef back to pan. Add 1/2 inch of water, along with salt, pepper, paprika, parsley, and garlic. Cover and simmer on low heat, adding more liquid if needed. When beef is tender, remove from pan and grind or chop coarsely in food processor.

Combine chopped beef, chopped chicken and whatever remains in the pan. If needed, add up to 2 T. additional melted chicken fat, both for flavor and to hold the filling together. Taste and adjust seasoning. Filling should taste somewhat salty.

Murray notes that the texture of the filling should be something like ground meat, as though you were making meat balls. Also, to make a lower fat version, you could omit the chicken fat and use additional browned onions. If the filling seems too soft, add some bread crumbs.

The original recipe suggests using a a food processor to mix the dough and a pasta machine for rolling it out. If you use a pasta machine, divide into 4 portions. You should end up at the thinnest setting. Or you can follow the old-fashioned approach: mixing and rolling by hand!

Either way, cut the thin sheets of dough into 3 x 3 inch squares. Put a heaping teaspoon of filling in the center. Here is where things change a little: The Murray Method is to moisten the edges of the square before folding into a triangle. The edges are simply pressed together. Then, the final step: Two points of the triangle are joined and pressed together. The finished product should look like tortellini.

Ultimately, the shape doesn't define the dish. I have read about Slovenian zlikrofi that are shaped the very same way, and I have enjoyed kreplach that are simple triangles. Again, it is your choice.

To prepare: Cook in boiling salted water, a few at a time, and "cook until they rise to the top of the water." Remove and drain. The printed recipe suggests that the kreplach should be coated in oil or melted chicken fat to store. They can also be frozen and then simmered for five minutes in soup or broth.

Serve in soup or on their own.


Update: Two years later, I finally made Murray's kreplach. Even with a few healthy modifications (no salt, oil instead of chicken fat) it was wonderful!  For details, go here.