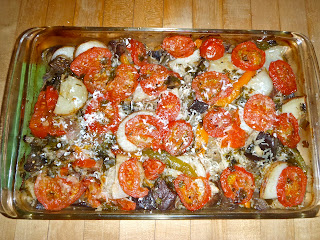 Djuveč ("ju-vech") is found in one form or another throughout the Balkans.  But I had never heard of it until I started poring over my vintage copy of Treasured Slovenian and International Recipes, the cookbook put together by the Progressive Slovene Women of America.

The origins of the dish are probably Turkish. The Romanian version, ghivetch, is often considered a Jewish dish, one I recall seeing on menus in Israel.   It sounded like a mildly spiced version of ratatouille, although djuveč usually adds meat and a little rice to the familiar vegetable mix.

The Progressive Slovene Women included two versions in their cookbook.  I was surprised to find one of them in the Slovenian section, since the dish probably reached Slovenia by way of Serbia. The second one, called Serbian Djuveč, was included in the International section.  At first glance, neither one struck me as unusual.  Both recipes were plain dishes with minimal seasonings, and easy to make.

The Slovenian version specified a lamb/pork mix and spiced things up with parsley.  It also involved an initial cooking period on the stove before the casserole went into the oven.  The Serbian version, done completely in the oven, added some eggplant and a cheese topping.

I combined the two recipes to come up with the following adaptation.

Cube and salt the eggplants and set aside in colander to drain.

Brown meats in oil.  Add onions and peppers and brown.  Add eggplant, salt and pepper.   Add a little water.  Cook until meat is tender, adding water, a tablespoon at a time, as needed.

Oil a large rectangular glass casserole.  Layer half the meat-vegetable mixture,  half the sliced raw potatoes, salt and pepper, half the rice, and half the parsley.  Repeat layers.

Top with sliced tomatoes and if desired, crumbs. (Omit, if you desire a gluten-free dish!)  Drizzle with olive oil.  Add some liquid.  Bake at 350 degrees for 1 hour or until rice is tender.  Cover for part of the time.  Add liquid if mixture gets too dry.  In last 10 minutes, sprinkle with cheese. 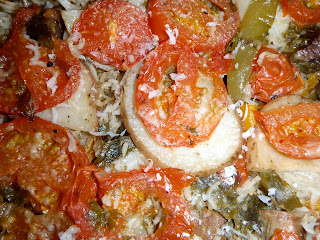 After I had assembled the djuveč, I paused to admire my handiwork.  This simple dish did look pretty.  I popped it in the oven and figured I had time to take a break from cooking.

The djuveč was fine.  In fact, it tasted wonderful,  once we got around to eating it.

The problem was the middle finger of my left hand.    I managed to tear the tendon when I was making the bed.

So my long suffering husband arrived home to find a wife with a fingertip that drooped downward at a sickening 90 degree angle.  Or it would have, if I hadn't splinted it with a nail file.

We turned down the oven and made a quick trip to the doctor.  I returned with my finger in a splint.

"Do not remove the splint for 8 weeks, or you'll risk permanent deformity," the physician's assistant had intoned.

But what about my accordion playing, I wailed.  My Slovenian cooking project.  Not to mention the fact that I write with my left hand.

A nice glass of wine and a serving of delicious djuveč helped me set aside my worries, at least for the rest of the evening.

I couldn't resist taking the photo below and posting it on Facebook.

"Oh, oh.  Finger casserole?" one of my Facebook friends asked.

No, not a cooking injury, I explained.

But it would have made for a good story. 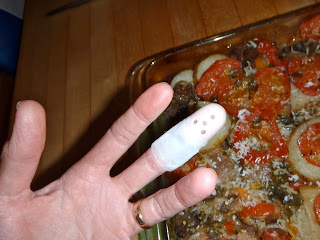