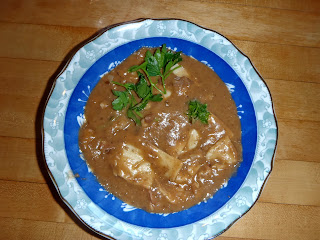 For months, I had been trying to figure out the thick bean soup my mother recalled from her childhood.  She referred to it as "black-eh."  I had come to think of it as our family Mystery Bean Soup.

Just like our family history, the story about this elusive soup emerged slowly.  I'd had an "ah-ha" moment when I figured out that my mother might be referring to bleki, the square noodles that are a delicacy in Slovenian cooking.  And then it turned out that the beans she recalled were actually Roman beans or borlotti, not the black beans I had imagined.

Put together Roman beans and pasta or noodles and you get pašta fižol, a tasty soup-stew.  For my Week 12 dinner, I had made a version that my husband and I enjoyed. But I suspected that it wasn't quite the soup that grandma used to make.

Finally, I read a single line on a Slovenian website that pulled it all together.  It described a traditional soup of pureed beans, thickened with roux, and accented with bleki.

Bingo! This must be it.

True, it was a concept more than a recipe. But it was enough to go on.

The Tuesday before Mother's Day, I set out to re-create my grandmother's  Bleki Soup.  I planned to follow my own recipe for pasta fizol, with one change: I would puree the beans before I added the bleki.  Assuming it turned out, I would have the perfect gift to present to my mother on Sunday.

You can find my Week 12 pasta fizol recipe here.

In addition to pureeing the beans, I made a few other changes to that earlier recipe.  Some were intentional, and some were unplanned.

Instead of the turkey bacon, this time around I used pancetta, the real thing.

To increase that tangy roux flavor,  I used browned flour instead of plain flour.  This is a trick I learned from our years of Cajun cooking.  You simply brown the flour in a dry pan, stirring constantly to prevent burning, before using it in a recipe.  This can even allow you to make a fat-free roux, if you choose.

I also took a couple of short cuts.

Since I was a little leery of kneading with my finger in a splint, I made the bleki dough in a food processor.

I hadn't been able to find Roman beans until the morning of my cooking project, so I had to skip the overnight soaking.  I was forced to adopt the quick method:  bringing the beans to a boil and then covering and soaking for two hours, before cooking.

I did have some anxious moments with the beans.  After a couple of hours of simmering, they were tender enough.  But I was convinced they tasted metallic.  Oh-oh.  Instead of the ceramic pot I used before, I had soaked them in a metal Dutch oven. I started to panic.  My husband thought the beans tasted fine.  But just to be on the safe side, I increased the seasonings in the soup.

Otherwise,  I followed the same steps described in the pašta fižol recipe, until it came time to mix the beans with the sauce.  At that point,  I pureed the cooked beans in the food processor, before combining them with the sauce and then adding the bleki.

We served the bleki soup with a tangy waldorf salad my husband put together.

Our verdict: We thought the soup was very tasty.  (And not at all metallic!)  But the real test was still to come.

I froze a generous portion and presented it as a Mother's Day gift, when we took my mother out for a celebratory brunch on Sunday.

My mother called me up the next day.   She'd had the soup that night for dinner.

The final verdict:  It was a success!  Just what she remembered.

She did mention that her mother had made the noodles a little smaller, probably as 3/4 inch squares.  But otherwise it looked and tasted the same.

There was more to the story.

She told me that she had tried to find Roman beans, early in her marriage, to make the soup.  But just like me, she'd had trouble locating them.  Her mother used to get them at a Slovenian grocery.

I was touched and surprised by this revelation.

Once again, I was reminded that my mother had more interest in preserving her Slovenian heritage, at least in the kitchen, than I had ever realized.