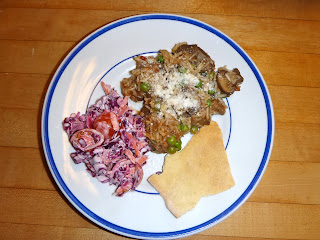 It was early June, almost half way into my year of Slovenian cooking.  I had started to worry that I might be running out of new recipes to try, at least if I confined myself to my three vintage cookbooks.

At first, I overlooked the recipes for Slovenian-style risotto, or rižota.  Each one of the cookbooks had a version.  Sometimes the meat mixture varied, but otherwise they were all fairly similar.  Not too exciting, I thought.  They seemed like simplified, less rich versions of the classic Italian dish.  None of that slow stirring so that the rice gradually absorbed the liquid.

But I decided to give rižota a try.  I stuck pretty closely to the version offered by the Progressive Slovene Women of America.  I substituted beef for veal and used a little less pork.  I upped the tomatoes slightly and, as usual, substituted olive oil for fat or lard. Naturally, I used frozen peas instead of canned.  (Maybe I'll try fresh next time.)  When it came to the rice, I used the long grain variety we had on hand.  Short grain, like arborio, is usually recommended for risotto.

In large skillet, brown onions in oil. Add meats, brown about 20 minutes.  Add seasonings and tomatoes, simmer 20 minutes, adding water as needed.  Add sliced mushrooms and simmer until meat is  tender, 20-40 minutes, stirring.  When meat is tender, sprinkle with rice and add 1 c. water.  Cover and from this point on do not stir.  Check periodically, adding water as needed, and shaking pan to prevent sticking.  Top with frozen peas for the last 10 minutes of cooking.  Rice will take 15-20 minutes in all to cook.  Sprinkle with parmesan cheese, if desired. 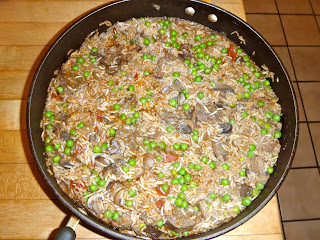 We topped the rižota with freshly grated parmesan cheese and served it with coleslaw and some crunchy mlinci saved from last week's dinner.

The verdict:  A winner.  This dish was rich and flavorful.  Nothing I would have guessed from reading the simple, mildly seasoned recipe.  My inclusion of brown crimini mushrooms probably offered a flavor boost.

Overall, this was one more reminder that there is more than meets the eye, where Slovenian cooking is concerned.